Today Steinberg released Dorico 1.1.10, the latest update to its scoring program. The update is free for all registered users. This is the fifth update since the product’s initial release and the first one since the Dorico 1.1 update in June of this year.

The most significant item in the 1.1.10 update is the inclusion of a graphical editor to customize the appearance of chord symbols. There are several other refinements in the area of chord symbols as well as other areas, along with dozens of bug fixes.

With the inclusion of chord symbols in the Dorico 1.1 release, the Steinberg team fulfilled a promise to get the feature done right. The bevy of built-in engraving options and ability to use any text font has made Dorico’s implementation of chord symbols the best of any of the scoring programs.

It’s worth mentioning that before you start exploring the intricacies of this editor, you should first become familiar with the many choices available in Engrave > Engraving Options > Chord Symbols to see if your preferred choices are there already. This graphic that shows all of the choices, from our review of Dorico 1.1, should give you plenty to study!

Still, given the seemingly limitless variety of ways to express chord symbols, the inclusion of the editor is welcome and necessary for anyone needing complete control in this area. To that end, you’ll see a new Project Default Appearances section at the bottom of the Chord Symbols page of Engraving Options. Click Edit… to open the editor. 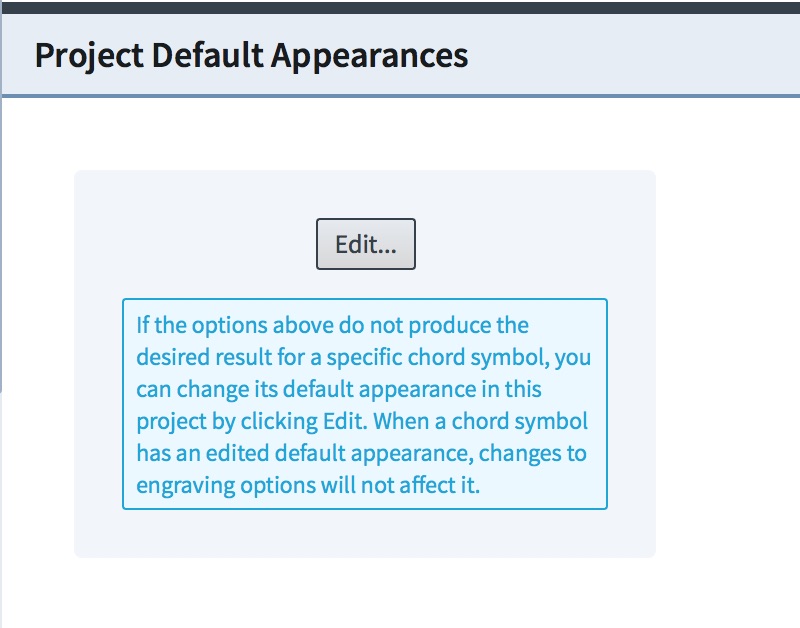 Once in the editor, you can enter a chord symbol to add it to the Project Default Appearances list. Each component of the chord symbol may be individually selected, and you can cycle through them by using the left or right arrow keys or by clicking Previous or Next. 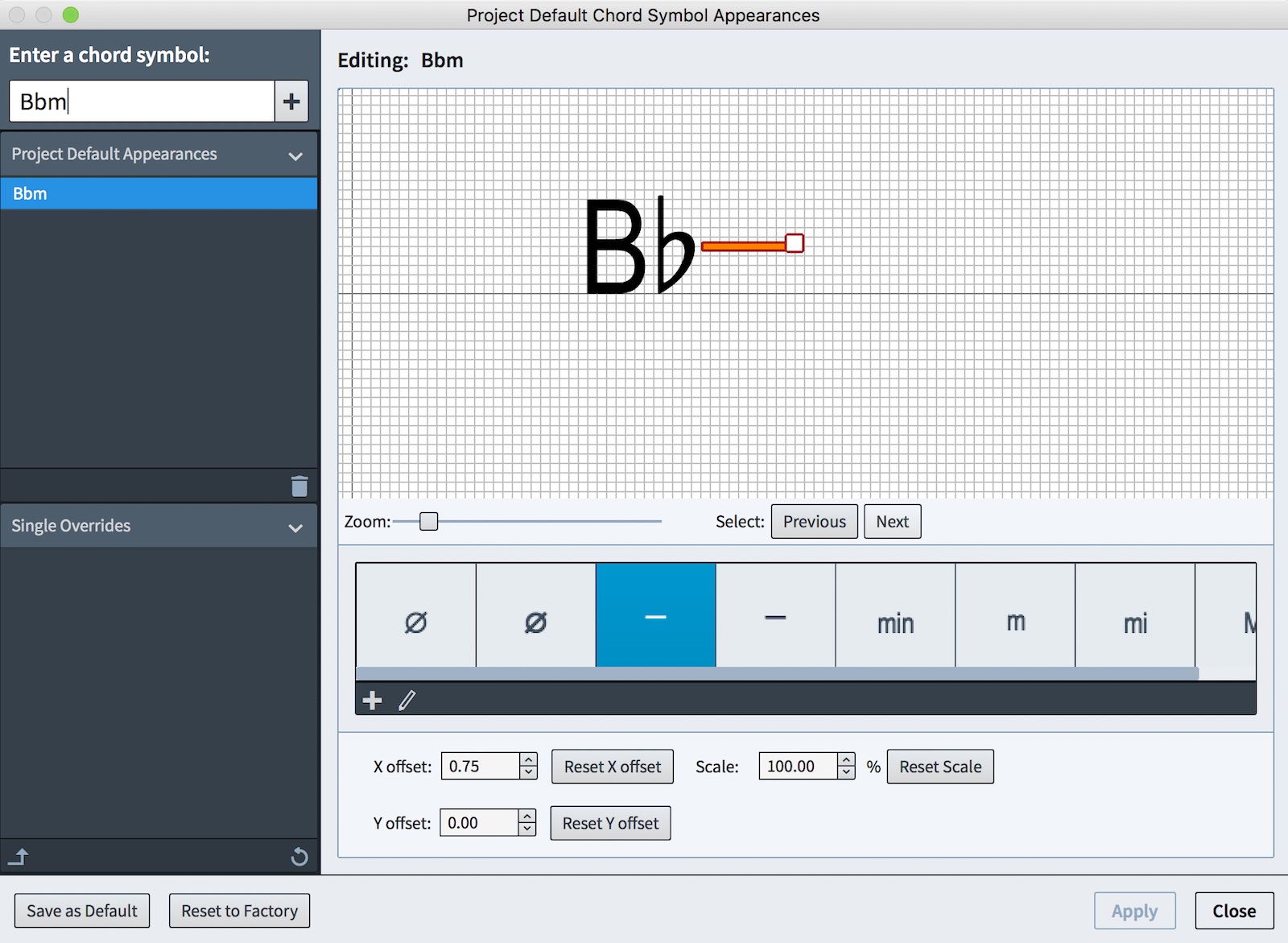 Once selected, the component’s position and scale can be adjusted. You can also make substitutions with other compatible components — again, though be sure that you haven’t overlooked such an option in the Engraving Options.

It’s likely you’ve come this far not only to make subtle positioning adjustments, but also to edit the component itself. For instance, I want to use a shorter minus sign for minor chords instead of the long dash that Dorico uses.

To make sure that this change applies to all minor chords in the project, first select the existing symbol in the list of compatible components, and then click the pencil icon (Edit Component). 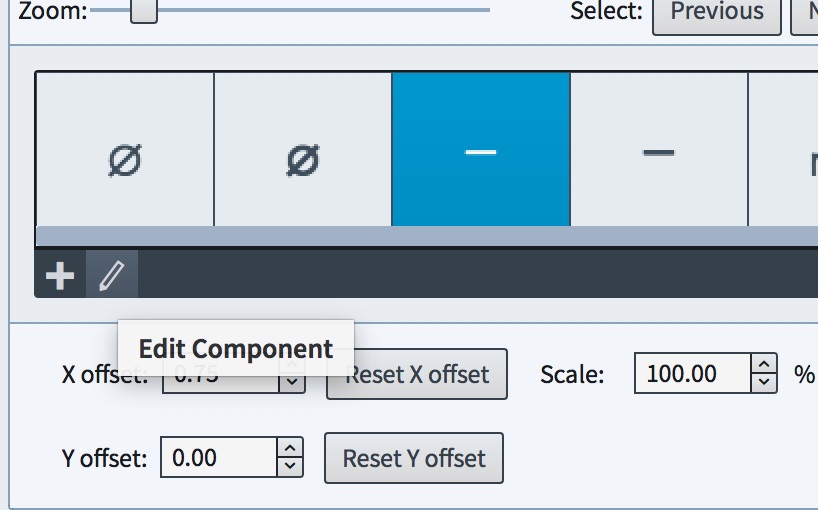 This will open the Edit Composite Component dialog, from which you can add any glyph from any font installed on your computer, add a string of text, include a graphic, or use one of the existing symbols used elsewhere in Dorico, in any combination. 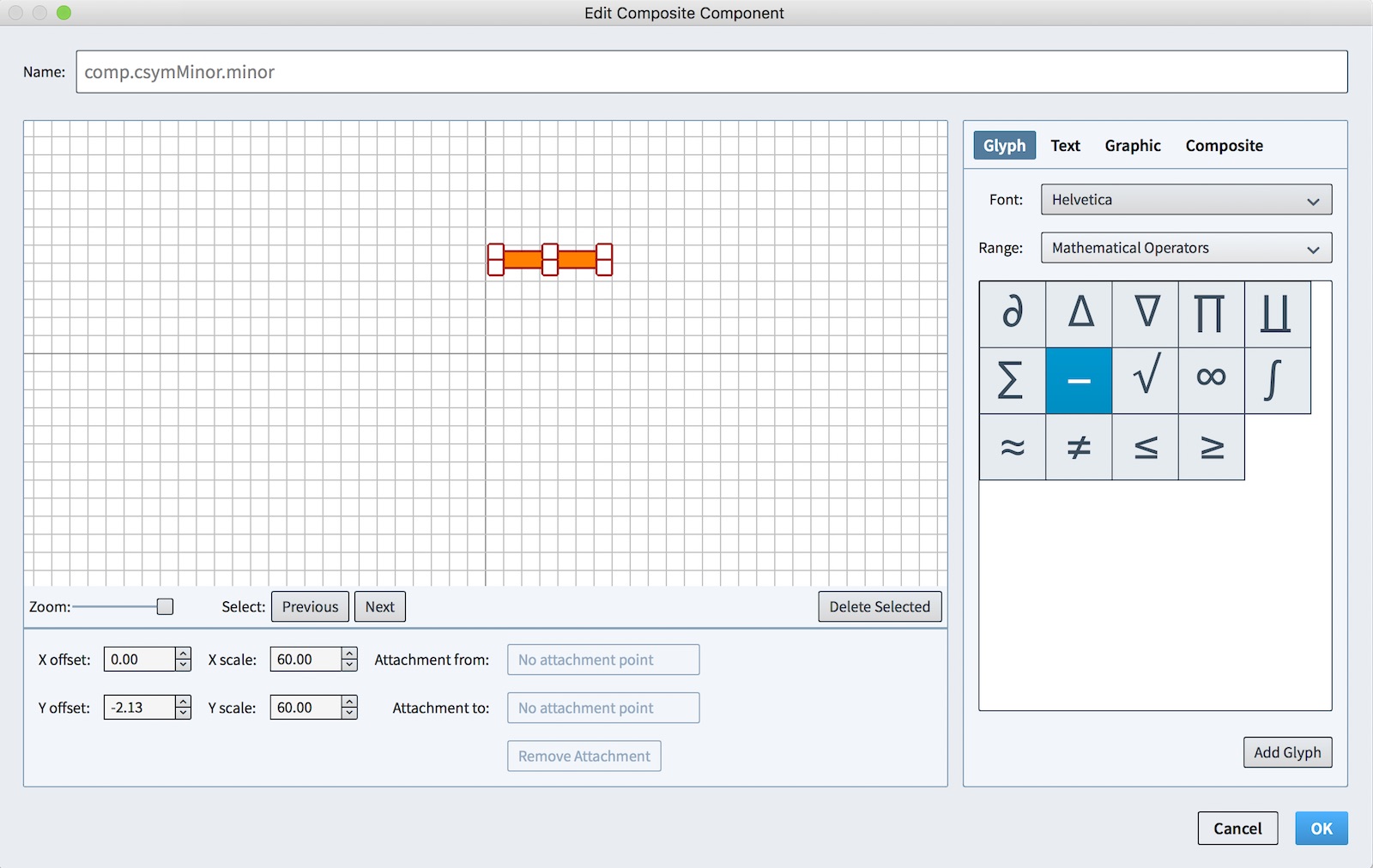 Once this is all done, if you’re so pleased with your changes that you want them to be used as defaults not just for this project, but for all newly created Dorico projects, you can click Save as Default.

Many of the above operations are available on a case-by-case basis. To make adjustments to an individual chord symbol without affecting any others (even identical chord symbols elsewhere in the project), switch to Engrave mode if you’re not there already and simply double-click the chord symbol you wish to edit.

If you’ve made a change to one symbol that you really like and want to propagate it to all instances of the symbol, you can open the aforementioned Project Default Chord Symbol Appearances dialog (from Engraving Options). You’ll find your symbol in a list of Single Overrides, from which it can be promoted to the Project Default Appearances. 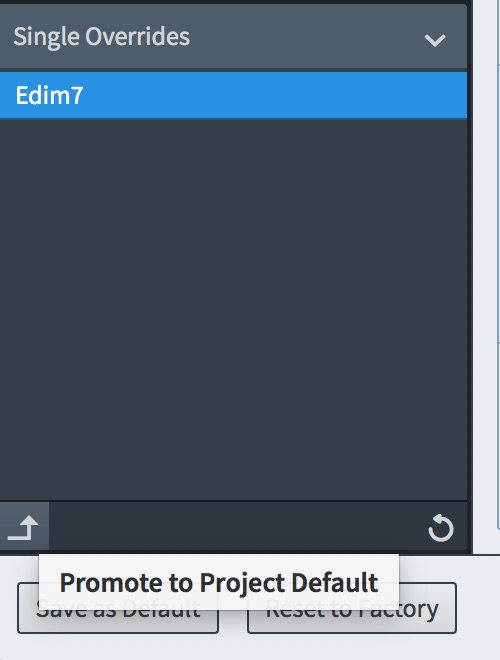 With the addition of this editor, you can make the finest of adjustments or create some truly wacky chord symbols here. The is indeed welcome to give the power user complete control over every aspect of this element of music notation. However, like the chord symbol editors in Finale and Sibelius, it’s not a place where most users will regularly find themselves.

The most notable among other chord symbol-related improvements is a new option to show chord symbols above the top staff, found in Setup > Layout Options > Staves and Systems.

Choose Above Top Staff of System to enable this. This is a really big deal for those users that work on piano-vocal charts. It’s customary to show the chord symbols above the top staff in these charts. Often, however, the vocal line(s) is hidden during the introduction or an instrumental break. In Finale or Sibelius, this meant fixing your layout and adding chord symbols to the right hand of the piano part for these measures only.

With this new option in Dorico, that’s no longer necessary — the chord symbols are always automatically placed on the staff: 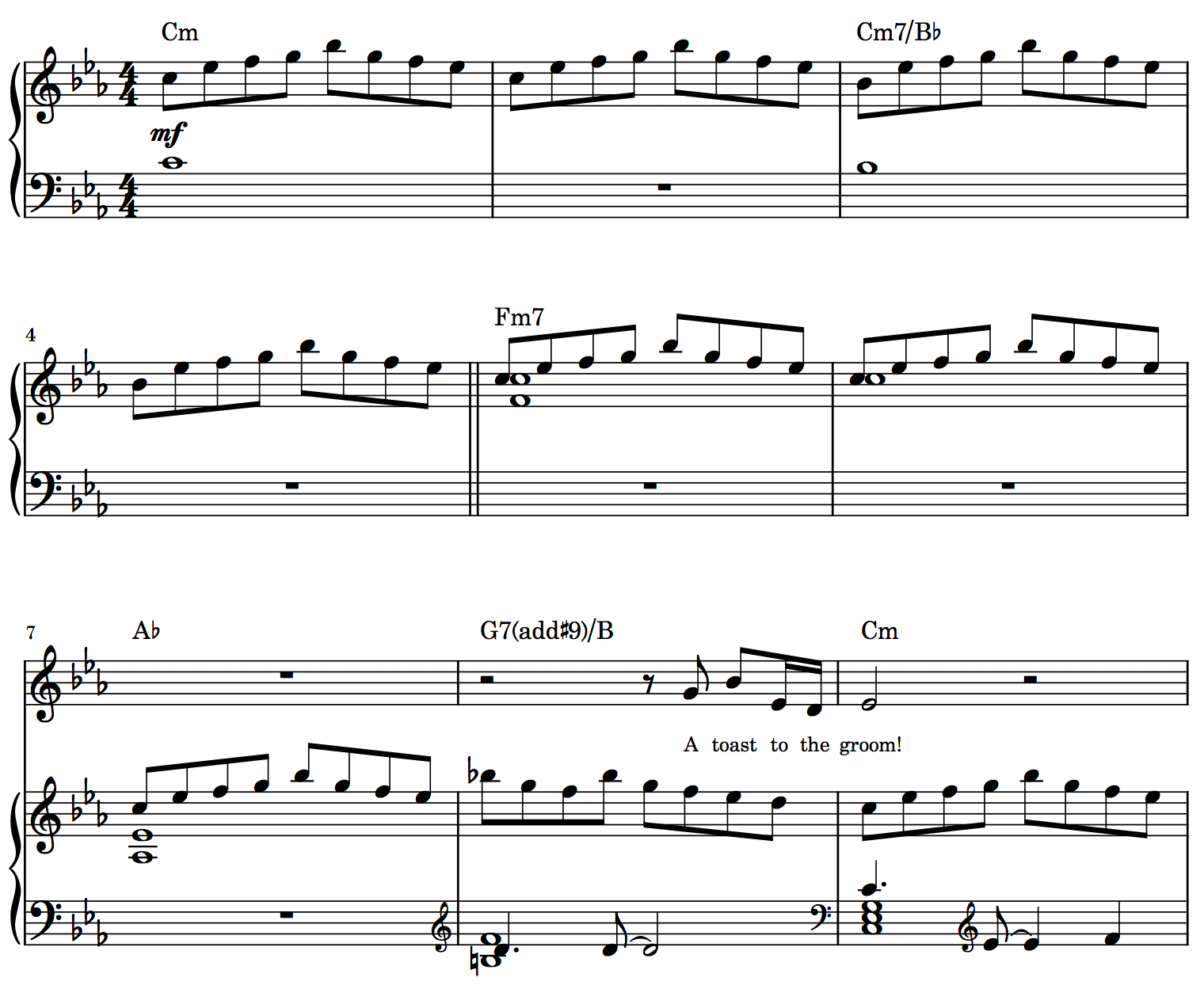 Other improvements to chord symbols in 1.1.10:

Pedal lines, repeat endings and vertical staff spacing were other major additions to Dorico 1.1, in addition to chord symbols. These areas have also seen some improvements in the 1.1.10 update.

Pedal lines. You can now specify the case of pedal lines like “una corda” and tre corde”, in addition to all of the other various options already here:

Repeat endings. You can now show 1.3. in the first segment and 2. in the second segment, in instances where the final segment of a repeat ending is not the final one played. 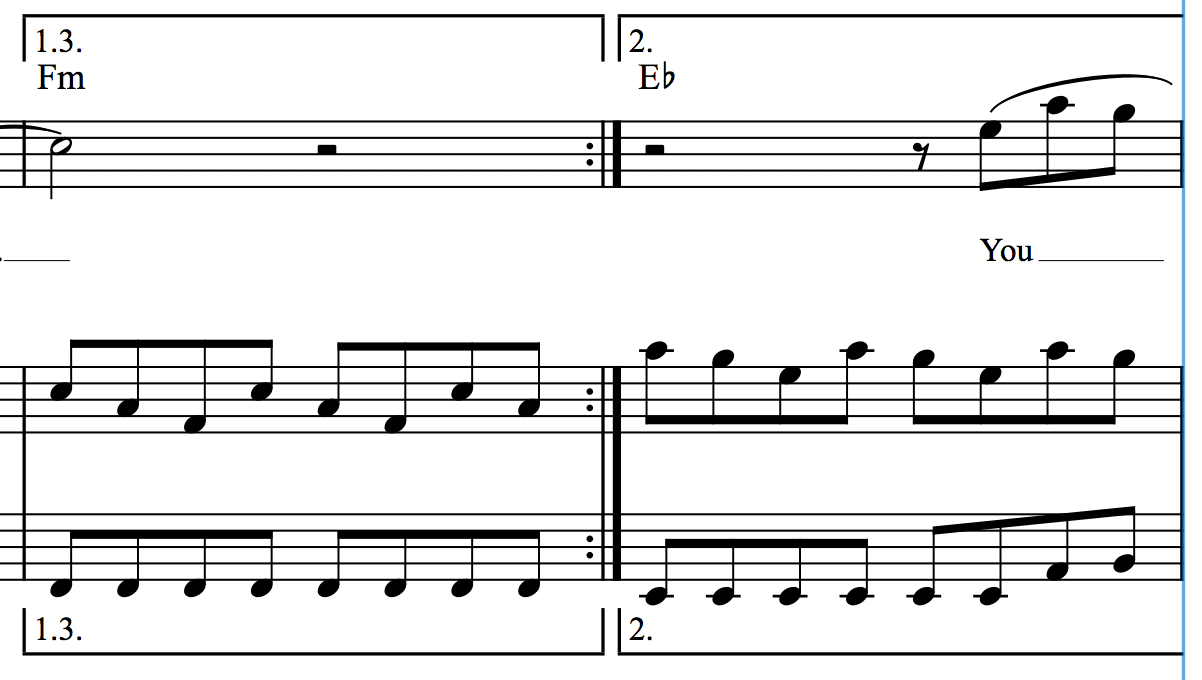 Vertical spacing. A new option in Setup > Layout Options > Vertical Spacing > Vertical Justification will allow you to independently decide whether or not single systems should be vertically justified. This gives you even further control in instances where a score might usually have two systems per page but occasionally has only a single system per page, and you don’t want that system to be justified.

In that instance, you would uncheck the new Justify distance between staves and systems when page is at least n% full option:

Dorico 1.1.10 also improves the handling of tempo changes by specifying the final tempo of a gradual tempo change. The update also makes these changes play back correctly in all time signatures, not just those with a beat unit of a quarter note.

For the first time, included with Dorico 1.1.10 are seven example projects that illustrate the quality of engraving and diversity of styles that Dorico supports. Unless you’re starting Dorico for the first time (in which case you’ll see them immediately following installation), you’ll need to know where they are located. On Windows, they’re in in C:\Users\Public\Dorico Example Projects, and on Mac, they’re in /Users/Shared/Dorico Example Projects. Several on them will be familiar already to those who have followed Steinberg product marketing manager Daniel Spreadbury’s blog closely.

Dozens of bugs have been fixed since Dorico 1.1, in addition to all the items regarded as new features. A full list of those fixes, a version history and application updaters are available from the Dorico download page on Steinberg’s web site.

Dorico 4.3 is out with more powerful controls in the Key Editor and a robust system for automatically generating notes...

Watch a thorough tour of the new features in the forthcoming Dorico 1.1 update in action, including chord symbols, piano...