How much time have you spent tweaking your Finale or Sibelius defaults, adjusting engraving rules, perfecting your house style, creating custom symbols, setting up headers, only to wonder if what you were doing was even correctly done? A couple of hours? Days? Weeks or months? Wouldn’t it be nice if there was an out-of-the-box template that was built to be dropped onto to the music stands of professional recording studios with all of those details sorted out?

For the introductory price of $65 ($79 later), the new CineScore templates for Finale and Sibelius aim to address that need. Sold by the makers of the venerable Cinesamples virtual instrument libraries and tailored by expert music preparer Robert Puff, the CineScore templates are four files — two each for score and parts, Finale and Sibelius — that hew to standard formats and styles commonly used in commercial studio work.

To be clear, although the CineScore package is sold by Cinesamples, these are music prep templates only. In other words, they are not set up for anything other than the programs’ default playback; there are no libraries or sound sets for use with the Cinesamples libraries.

The target market for the CineScore templates are composers, orchestrators and music preparers working in studio sessions (and those aspiring to be). Cinesamples co-founder Michael Barry told me:

Though I personally enjoy the beauty of a well notated score, both visually and musically I found myself unable to concentrate long enough to get the results I often desired. … A few years ago while I was about to start work on the League of Legends album I wrote to Robert and asked if he would be interested in and able to make me a custom Sibelius score template for my team to use on all League of Legends stuff. It was to have all the proper lines and shapes common to studio work and have a general “League” look to it — with all the font choices and image imprints.

I figured it would be nice to have something like this for everyone. … I had a concept that it would be really wonderful, especially for project leads who may have composers/orchestrators who use Finale or Sibelius, for the template to mask the difference between the two — if in the end you weren’t able to tell which program it came from by glancing at the score or parts.

Along the way we spoke of many customizations to make it conform to life in the studio…to make the score look easier to read and less classical.

When you purchase the CineScore package, you get the four template files mentioned above. You also get sample scores and parts for each program, so you can see how a completed piece of music looks.

I was indeed struck by how virtually identical the Finale and Sibelius files look, especially using nothing but the music fonts that come with each respective program and standard text fonts like Times New Roman and Arial. (For a few of those tricks, see this blog post.) 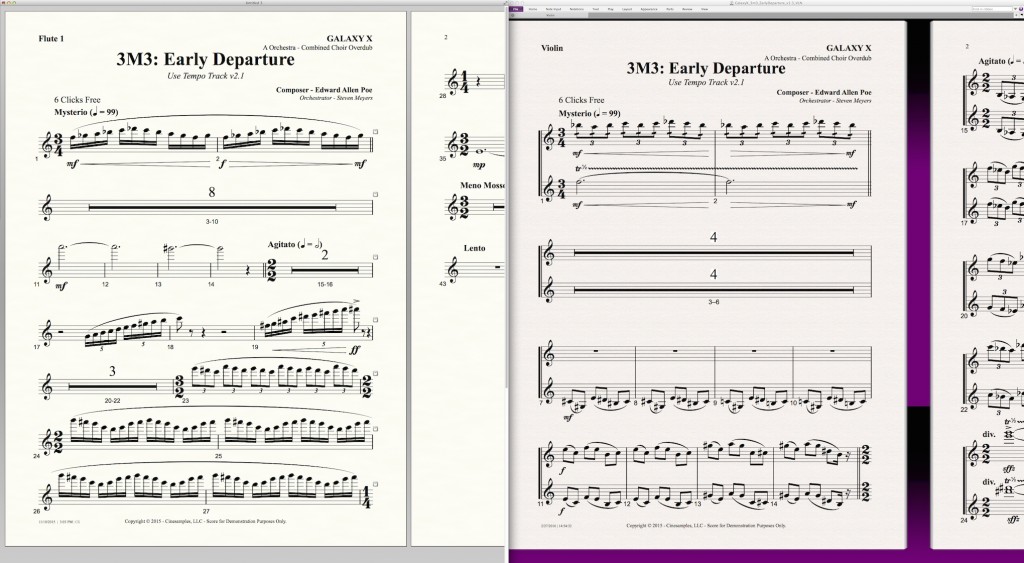 It’s not simply an academic exercise to do this. When working on a project with multiple composers and/or orchestrators, it can be a challenge to achieve a consistent look. When you prepare the cues to be placed on the stand, you want everything to always be in the same place on the page, with the same text, staff size, and so on. It brings uniformity to a project and keeps the focus on the music — not the variations in formatting.

There are subtle enhancements to many settings in both platforms. In Finale, for instance, the noteheads are Maestro Wide 25 pt instead of the usual Maestro 24, and the note flags and certain articulations (like the notoriously large Maestro accent) are using the Engraver font. In Sibelius, notice how the wings from the system brace are removed to achieve a more commercial look — not a straightforward Sibelius setting to achieve. Spacing before and after the barline in both programs is widened to minimize collisions with bar numbers appearing below the staff.

The scores are set up for the classic big Hollywood orchestra: triple winds, six horns, 4 trumpets, 4 trombones, tuba, timpani, 4 percussion, harp, piano, synth, SATB choir, and strings (divisi). If you’re not so fortunate to be writing for such a massive ensemble (or, conversely, if you have even more players), you’ll have to make the appropriate adjustments as necessary.

This may affect certain settings like the large time signatures, which are set to appear only on certain staves in the score: 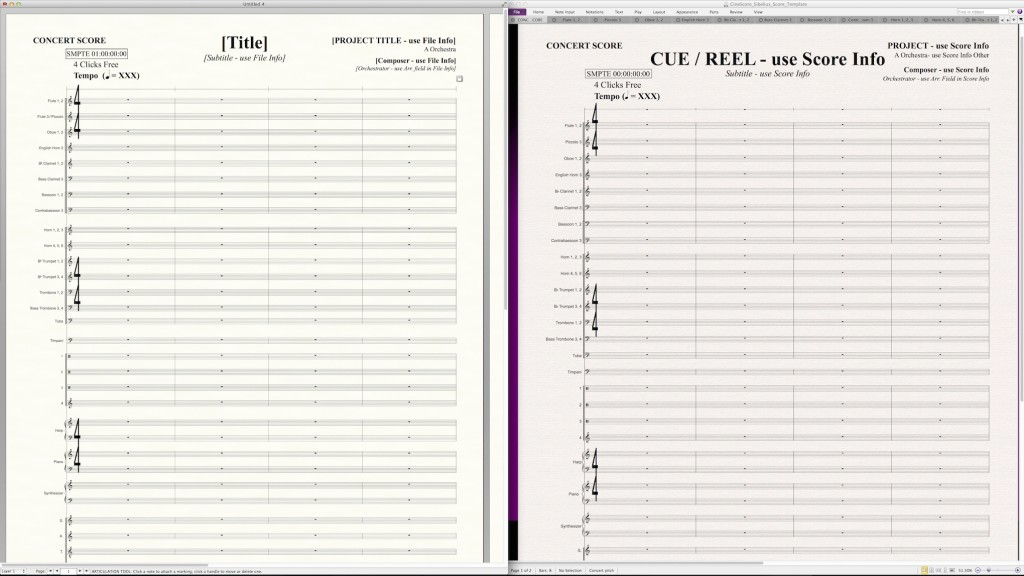 There’s no documentation with the CineScore package — only a brief 2-page “Standard Operating Procedures” which offers very basic music preparation advice — so you’re on your own if you need to know how to make adjustments like these. (For this particular case regarding time signatures, see Tim Davies’s blog for Finale and elsewhere on this blog for Sibelius.)

Making up somewhat for the lack of documentation are the sample files mentioned above, a 10-minute introductory video, and some hints sprinkled throughout the files. The templates make extensive use of text wildcards, and the templates tell you to “use File Info” for Finale or “use Score Info” for Sibelius instead of typing text directly into the fields. This is important so that the headers on subsequent pages appear correctly.

As another example, there is a separate Finale articulation for whole note tremolos, which by default appear in a strange position compared to the usual tremolo. The template thoughtfully includes a dummy placeholder articulation to advise you of this. (The free JW Yada Yada Tremolo plug-in obviates the need for a separate articulation, but, of course, you need to have the plug-in.) 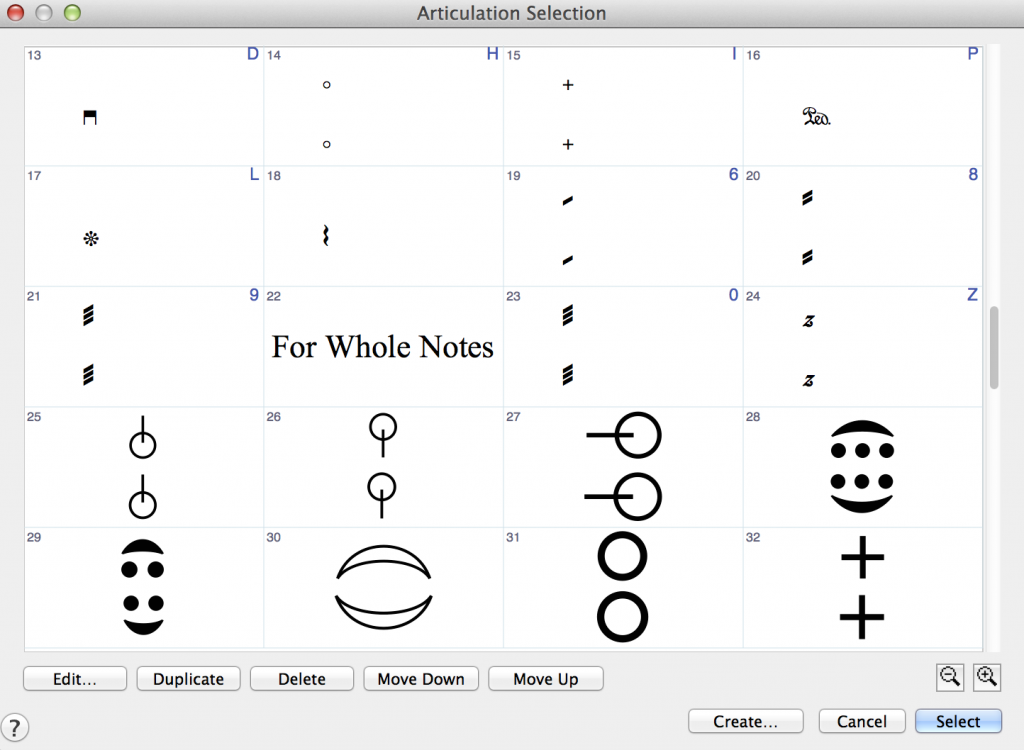 There are a few nice custom lines and symbols, like 1/2 step and whole tone trills (useful when the score is a concert score and the part is transposed), some extension and wavy lines, and staccatos to be placed on triplet tremolos. 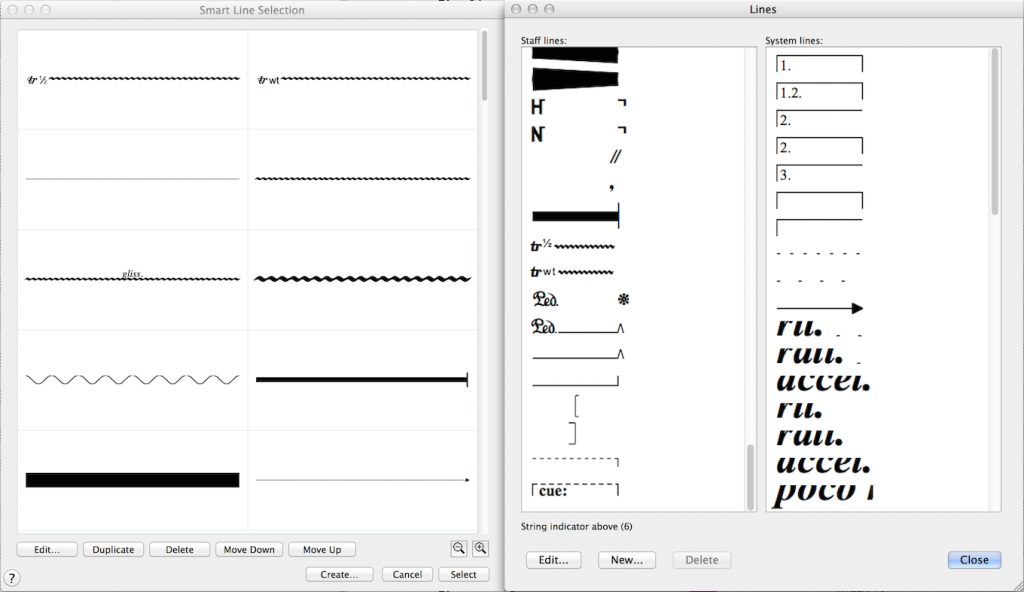 Files in each format have a few custom text styles, such as text for harp diagrams and SMPTE code. In Finale, there are also staff styles for the most common transposing instruments: 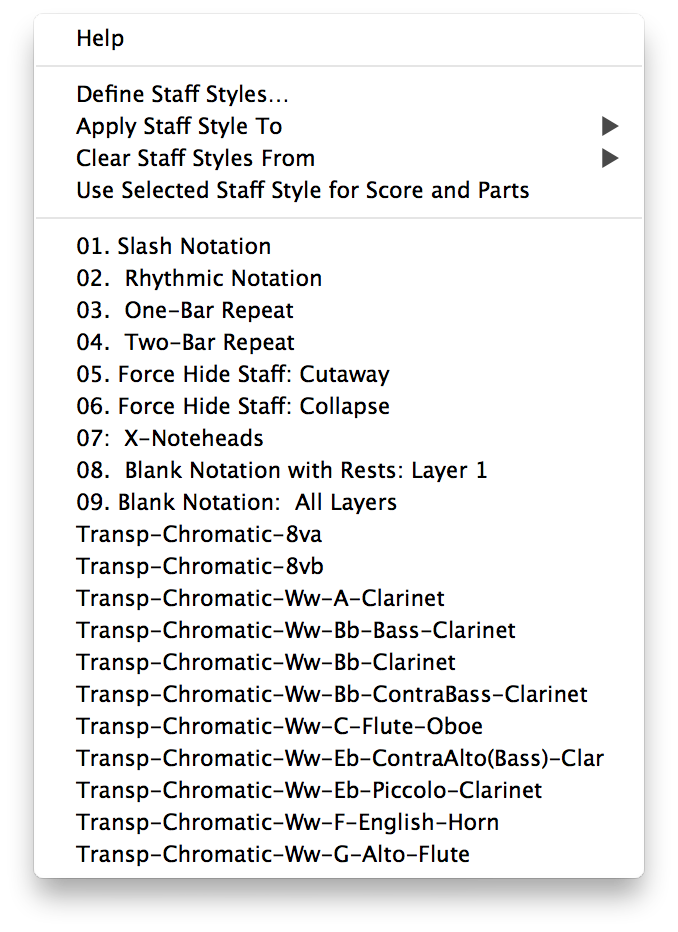 The files are in Finale 2011 and Sibelius 6 format, to maintain as much backwards compatibility as possible, since many professionals still use those older versions. CineScore doesn’t officially represent that the files will work in later versions, but they should open and work just fine in all recent versions of both programs, though the templates don’t make use of hierarchical text styles or some of the other more advanced text features introduced in Sibelius 7.

As mentioned, you get one score and one parts template for each of Finale and Sibelius. The latter is a bit of an anachronism — it’s technically a score file formatted to look like a part, otherwise known as an extracted part from pre-Finale 2007 and pre-Sibelius 4 days. There are still quite a lot of music preparers extracting separate parts and/or doing the old paste-into-template method, and that’s what this file is for. If you use Linked/Dynamic parts, however, this file won’t be of much use.

However, the score files are set up for linked parts — mostly. The Manage Parts dialog in Finale specifies rules for voiced parts, which will automatically split a staff into two or more separate parts. The templates in both Finale and Sibelius have “score-style” percussion parts, Violin 1 & 2 parts, and choir parts. 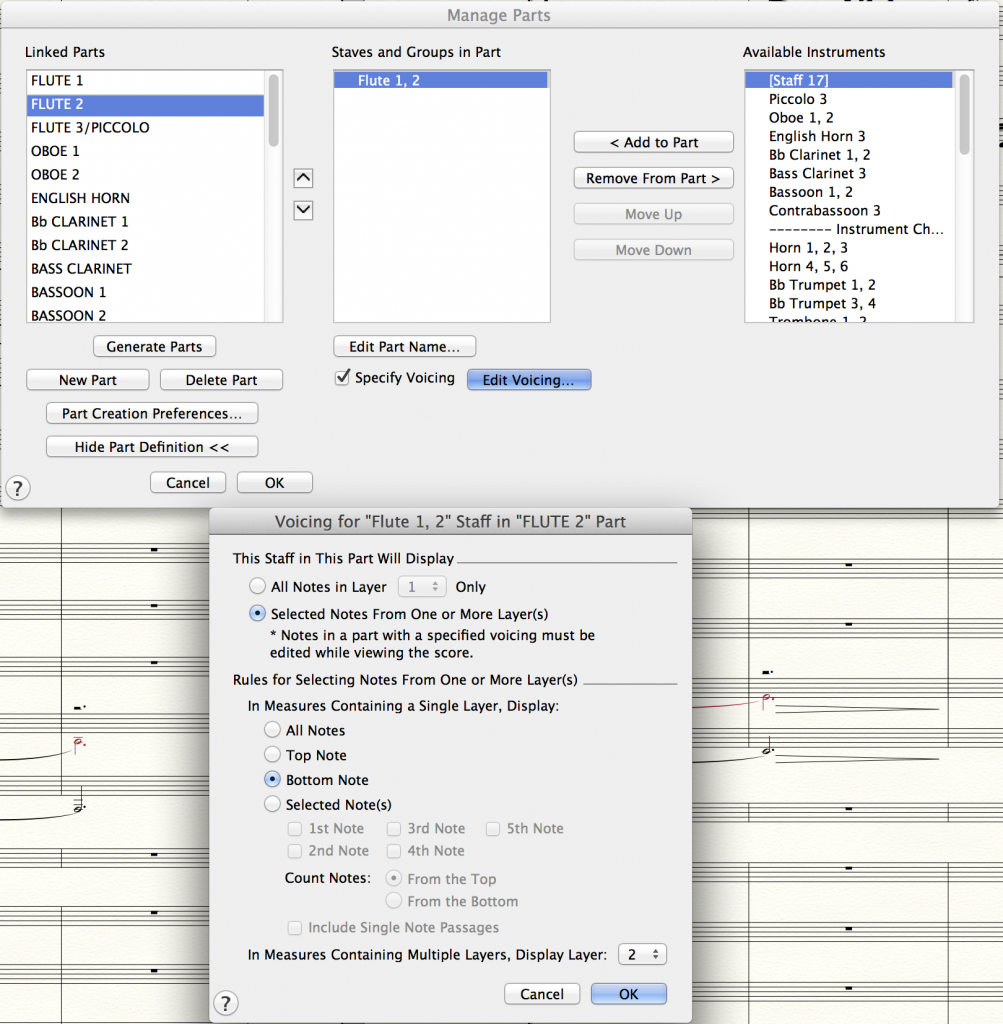 Unfortunately, there are a few missing steps in order to make full use of the score files as a true linked parts file. For instance, in Finale, time signatures will be missing in all of the parts other than the ones specified to be shown in the score. One workaround for this would be to create and apply a Staff Style that only appears in the parts and is set to display time signatures. It’s an effective but esoteric solution, and if you don’t know about it and use the score template for linked parts, you might be putting parts on the stand that are missing time signatures.

Another effective solution for the above problem would be for the music preparer to save off a separate copy of the score received from the orchestrator as a “parts score” file and then run the Global Staff Attributes plug-in to display the time signatures on all staves.

There is a different issue in Sibelius, where voiced parts are simply not a feature of the program. The parts available in the score file have two winds or brass on a staff for many of the instruments, which is not practical for session parts — each player should have his or her own part. So you’ll have to split out the parts out yourself and then know how to export a house style and apply it to your new parts — certainly a common task for seasoned pros but not exactly a beginner’s topic.

For these reasons, I would have liked to have seen a third file included for each platform: a “parts” score, with settings that were optimized for linked parts. It’s not a deal-breaker, since the score files get you most of the way there. But if you’re paying money for these types of templates you probably would expect to have this included as part of the package. Michael Barry said that he did not include a linked parts score template because “it is not industry standard to use linked parts here. I find it is usually better to focus on what you want to achieve than try and do everything in encyclopedic fashion. I’ve never seen linked parts used in any of my sessions.”

Keep in mind that the files are designed for a very specific style and use — that of studio sessions in the US. Score page sizes are 11” x 17” and parts are 9” x 12”. The generous spacing and large staff size will look out of place for many other styles and uses, so if you don’t work in this type of music, the templates probably won’t have much value for you.

Creating Finale and Sibelius templates that look virtually identical is a worthy task, but many people will only have use for one or the other. I might suggest offering files for each platform separately.

Even with these limitations, though, the CineScore templates are fundamentally worthwhile. For a relatively modest price, you get years of expertise by top pros in the field. Their efforts — and their willingness to share their secrets in the form of these files — are to be commended. It will surely result in more beautiful and readable music appearing on the stands of many sessions, making for happier musicians, and, ultimately, better sounding scores.

The CineScore templates are available from Notation Central for $79. For support with the product, contact Cinesamples.