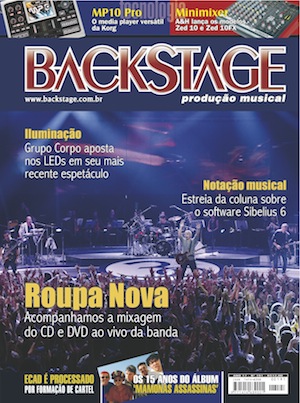 Brazil’s Backstage magazine, the country’s most respected audio/video magazine, is running a series of Sibelius tutorials, penned by Pro Class‘s Cristiano Moura, who has been featured on this blog before.

The first tutorial, in October 2010’s issue, is called “1001 ways to navigate in Sibelius”. My Portuguese isn’t good enough to count all the ways Cristiano has listed as methods of navigation, but I daresay the content of the tutorial will be invaluable all the same.

The October 2010 issue of Backstage magazine is available now. Keep an eye out for future issues with more tutorials from Cristiano!

The March 2010 issue of PC Pro magazine here in the UK carries a positive review of the new version...

We are delighted to announce that Sibelius 6 has been honoured by Electronic Musician magazine in its Editors’ Choice awards...

The November issue of Music Tech magazine contains an article about the live tour of Jeff Wayne’s War Of The...