This past Saturday at NAB 2014 in Las Vegas, Avid unveiled a highly publicized new strategic vision for helping content creators and media organizations connect with consumers. Called Avid Everywhere, it was introduced by president & CEO Louis Hernandez, Jr. to an audience at the Avid Customer Association’s inaugural event, Avid Connect.

The Avid Everywhere event was less about specific product details and more about defining the direction of the company. The centerpiece of the vision is a common services platform called Avid MediaCentral. According to Avid, the platform “facilitates an open and extensible environment that integrates technology from Avid and other providers. Content creators and distributors can produce, manage, deliver, and monetize media that adheres to a common set of standards – regardless of the vendor and tools they choose to use at each step of the way.”

“We are taking all that is common across our entire product set and putting it under one common platform – so we can share these capabilities as common services you need to have regardless if it’s news, video, audio, etc.” Hernandez said at the event. “You can then have applications that solve unique business needs but don’t waste time on things that can be done by the platform – no different than your smartphone and applications. The platform will then accommodate applications that do everything from create content to consumption of the asset.”

Within this vision are various suites of products and tools to assist Avid’s customers in their work: an Artist Suite comprising various products including Sibelius; a Media Suite for managing, distributing and monetizing media; and a Storage Suite. 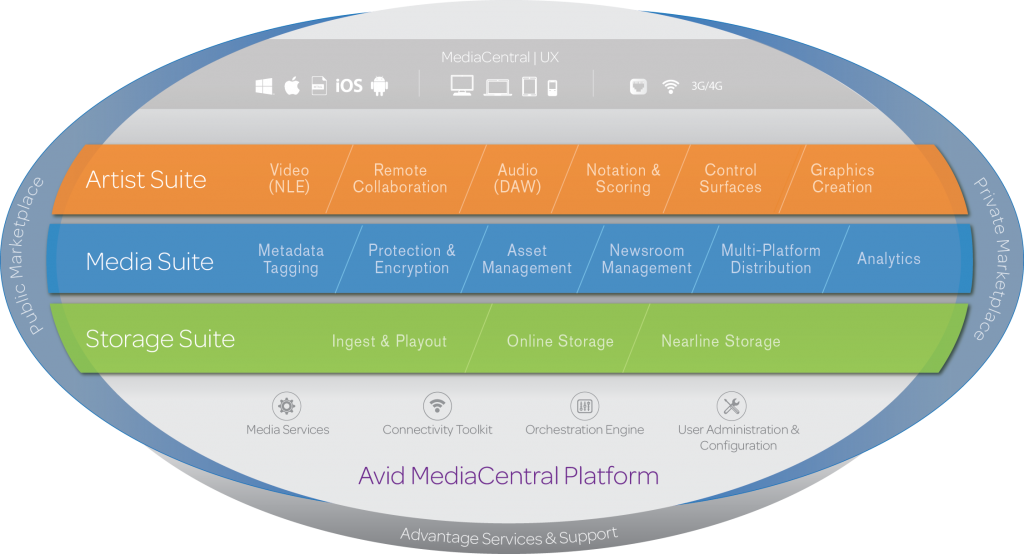 Accompanying the Avid Everywhere rollout were some re-branding of products using the vertical bar or pipe character, including the Sibelius product line. Sibelius First is now called Sibelius | First Edition; the Avid Scorch iPad app is now called Sibelius | Reader, although presumably it will take some time before these updates will be reflected in the various company-wide sites and materials.

I spoke with Andrew Wild, Avid’s segment marketing manager, to learn more about Avid Everywhere and what its implications are for the future of Sibelius. Read on to learn what we discussed.

“About a year ago,” Andrew said, “Louis Hernandez felt that we needed an overall strategic vision for the company. He felt that we were missing opportunities with our products, and that we needed to look at the various industries to determine the common problems that all of them were having.

“What we found was that were common problems, but the problems that we’re trying to solve are much more complex than ever before,” Andrew said. “Specifically, there were four key areas: collaboration; metadata; archiving and storage; and monetization.”

Andrew said that “rather than looking at individual products,” Avid wanted to take a broader look at the overall direction of the company and find commonalities with each of its products. “And so we have tried to align the teams together to have them much more related to each other than before.

“Sibelius 7.5 was the last release that was done in reasonable isolation” from other Avid products, Andrew told me. Going forward with future versions of Sibelius, “development will be governed by the Avid Everywhere philosophy.”

I asked Andrew specifically what that meant in terms of product features. “We first need industry feedback to make sure we’re going in the right direction,” he said. “And that means getting feedback from a whole range of people that we would have otherwise missed. The Avid Customer Association is part of that process.”

He explained that Avid was hearing that customers want to “monetize their assets using our tools; in other words, they want to sell their creations. A large group of creative individuals use our products, so it makes sense to connect these people together through a common platform. In Pro Tools, that might be a plug-in, a stem or sound library. In Sibelius, that could be a score. We have already shown this as part of the NAB tech preview for Pro Tools: users will be able to access the Avid Marketplace and buy a plug-in directly in Pro Tools, or sell or buy other media assets.”

Sibelius 7 introduced the ability to download and install free plug-ins directly from within the program, without needing to re-start Sibelius. I hypothesized to Andrew that a future version of Sibelius could extend this capability to allow developers to sell not only plug-ins, but perhaps music fonts, sound sets, sample libraries, score templates, house styles and more, in an Avid Sibelius Marketplace. Such a feature could bring a wider market to developers like Roman Molino Dunn, Jonathan Loving, Arne Wallander, Stephen Carisse, and others, all of whom make and sell terrific add-ons for Sibelius but whose products must currently be discovered and installed outside the official channels.

Andrew would not commit to divulging any new features, but he did say that one could look at what they have done or announced with their existing products, and extrapolate a general direction for the company. “The product development is moving towards collaboration and monetization, which our customers have clearly asked for,” he said.

“It’s too early to talk about how Sibelius will fit into this new vision,” Andrew explained, but he did say that “we will be taking the overall Avid Everywhere vision and applying it to future development of Sibelius, the Scorch browser plug-in and the Sibelius | Reader.”

The current version of Scorch, which is used by various publishers and companies, was a modest improvement to make it compatible with Firefox and other browsers. However, it is in danger of becoming outdated in the face of newer web technologies like Noteflight (which was recently acquired by Hal Leonard Corporation), as well as the phasing out of support in Chrome of the NPAPI on which Scorch is based.

About the re-branding of the Avid Scorch iOS app as Sibelius | Reader, I was curious whether that meant that the Reader will be coming to Android devices anytime soon, since one could imagine that having the Reader deployed across multiple mobile platforms would seem to be a logical fit within the Avid Everywhere concept. “Again, it’s too soon to discuss this,” Andrew said.

What must be understood, Andrew said, was that “we’ve changed the way in which we’re looking at future product releases. It used to be that you had a relatively small number of people giving feedback on a product in development.” Avid would then announce a finished or nearly-finished product, “with a release date in the near future. Now,” he said, “as you have seen at NAB, we have given the industry a technology preview so we can get feedback and input from a wider community – including the Avid Customer Association – and then incorporate that feedback into the development of the product.”

I asked Andrew what would be the best way for interested Sibelius users to give this type of feedback to Avid. “Certainly we’ll have individual features that will be specific to Sibelius, but we’ll also want to fit them in to the Avid Everywhere vision. We definitely look at IdeaScale” when it comes to implementing detailed feature requests, but Andrew encouraged people to register for the Avid Customer Association to be part of the larger collaborative discussion. There is an annual $100 membership fee, which Andrew said is used to pay for the administration of the association, including the cost of the complimentary annual Avid Connect event.

One thing I noticed when going to the registration page for the Avid Customer Association was that one could self-identify as a “power user” of various Avid products, but that Sibelius was listed as “Pro Tools (Sibelius)” — in other words, it was not possible to identify oneself as a power user of only Sibelius. Whether or not this is a sign of the future of Sibelius within the product structure of Avid remains to be seen, but on the Avid Everywhere site there was a diagram of Sibelius as part of the “Pro Tools” music creation family:

Andrew also mentioned that Avid was looking at ways that “we can introduce a subscription model” to its products. He pointed to the newly announced version of Media Composer as an example. “Say you have a studio that needs 100 Media Composer licenses because they are working on a project for one month. The next month, the project is finished, so they may only need 50 licenses.” In this example, he explained, a subscription model works well because the studio only pays for what they need, when they need it.

“We want to be more flexible to give whatever the customer needs,” Andrew said. For instance, he mentioned that Adobe’s recent subscription-only model with Creative Suite was an example of something that would not align with the Avid Everywhere vision, which states that “Avid gives you complete flexibility over how, when, and where you deploy and use our tools. We will never force you into a model that doesn’t work for you.” He also mentioned the importance of resellers to their distribution strategy.

After our discussion, I thought it was possible to envision future versions of Sibelius offered in various ways: as a perpetual license tied to a specific machine; on subscription; and on demand with a floating license – with all of user’s preferences and files stored in the cloud. A hypothetical but realistic example I imagined would be a composer who works in his or her studio in the morning; then goes to teach a class at a school; and then onto a recording session in the evening. The composer would have the ability to use Sibelius at workstations at each location, with his or her settings and scores available, without having to carry around a laptop.

It’s clear that Avid Everywhere is the new vision for the company, with its focus on product integration, collaboration, monetization, archiving, and metadata. What Sibelius users will be keen to see is whether Sibelius development will prioritize features that align with Avid Everywhere, at the expense of delivering specific music notation, engraving, and scoring features that are wanted and needed, but don’t necessarily fit within the company-wide strategy.

In part 2 of this two-part interview, Sibelius co-founder Ben Finn speaks to us about selling Sibelius to Avid, events...

Among several announcements at NAMM was a press release describing a new cloud publishing technology for Sibelius.

In this exclusive interview with Avid’s principal software engineer, we learn about his background, the challenges and opportunities that Sibelius...