I first fell in love with Gustav Holst’s “The Planets” as a high school student in Missouri. As a trombonist who also loved Star Wars, it was a perfect match. Little did I know how influential it would become for me.

As I went through college and studied more classical music, I began to understand how it became such a groundbreaking work that spawned an entire genre of film music. After moving to Los Angeles, I began my career in orchestration and again and again “The Planets” was always a reference score for any musical situation. The harmony straddled romantic and jazz languages. Its massive scale showed the way forward for the largest of film orchestrations.

When I had the opportunity to help write some additional music on the Star Wars: Battlefront video games, I did an even deeper dive into Holst’s harmony and textures. It was truly the musical equivalent of the bible.

In 2017, I attended a performance of “The Planets” at the Hollywood Bowl. That night, it all clicked. I was looking for material to adapt for a followup big band record, and I immediately knew what I had to do: reimagine “The Planets” for modern jazz orchestra.

Now that I had the idea to adapt “The Planets” for big band, I had to figure out how. I came up with a few general ideas for each movement before I started writing. For Mars, I wanted it to be Afro-Cuban. Venus, a jazz waltz. Jupiter, a blues shuffle. Uranus, a hard rock groove. I didn’t have a specific idea at first for Mercury, Saturn, or Neptune. I would worry about those later.

In this post, I’ll talk about Mars and Jupiter, to go along with the recordings below.

The first thing I did in arranging Mars was establish the groove. It would have to substitute for the ostinato played by col legno strings in the original.

My biggest piece of advice in adapting an existing piece of music for a different purpose is this: don’t feel bound to the original. Figure out the intent of the original, and then figure out a corresponding intent in the new style.

In this case, I replaced the 5/4 ostinato, with a piano montuno in 12/8. This would allow me to have a more idiomatic Afro-Cuban groove, without it feeling forced to sound like the orchestral version. Of course, it also meant I had to condense the 5/4 melody into 4/4. All part of the fun. Next, I added a bass line to help lock in the groove. Then, the Afro-Cuban drum groove finished it off. The harmony stays essentially on a G pedal, just like the ostinato from the original.

The next step is to decide on the main melody, the bass line, and the general harmony. I’ll map out as much of this in advance, if possible. I used the full orchestral score of the Holst original to work this out. It was essentially a giant score study exercise. I decided I didn’t want this version to start the same way as Holst’s, so I needed to come up with a new intro. I took the biggest orchestral tutti at the end of the piece, and twisted it into something new. It had to be loud and exciting, since this would open the album, so I constructed a call and response between the band and the drums.

You’ll hear the brief journey into swing. I write it as a traditional saxophone soli for only four bars, but it provides a nice release where the melody opens up, before quickly returning to the Latin feel. If the rhythm stays too monotonous, it will tire the listener’s ears.

Here’s a tip I use for writing sax solis that works in any setting. First, write out the top line melody in Alto 1. Then, I use the Simple Entry > Repitch tool to reharmonize the whole section by playing in the full 5-part chords on my midi keyboard. When I’m done, I use the JW Staff Polyphony plug-in to explode out the pitches automatically to the corresponding five staves of saxes. This plug-in works much better than the stock Finale Explode Music function, because you don’t have to choose the source material in a menu. You can just select the source with the Selection tool, run the plug-in, and it knows to spread the proper number of voices down to as many staves as needed. It also offers other options, like splitting a chord out in pairs or split pairs — helpful for orchestral horn part writing.

I knew right away that I couldn’t do a straight re-orchestration of the intro. I came up with the galloping shuffle bass line, and then swinging big band brass chords on top. I used the saxophones to fill in the gaps using the cascading, repeating 4-note violin figures from the original. This worked great because it allowed me to write an idiomatic big band opening, and I was able to include fragments of the Holst orchestration to tie it all together.

Next, I figured out how I wanted to write Holst’s melody, but in the new swing feel. I’ll usually hum to myself while playing along to the rhythm section to help me decide what works. Then, I’ll map out the melody across the big band where it makes the most sense.

Here’s a tip for working with rhythm section notation in Finale. If you look at the score examples, you’ll often just see slashes, rhythm hits, or 1-bar repeat signs. Finale allows you to put whatever note data you’d like underneath the staff styles. So, I will write a basic drum feel, or fills, so it plays back correctly, but it will still look right for the player to perform live.

For the piano or guitar part, I will write basic voicings to fill out the harmony for the bar to help me compose and get a general idea of what it will sound like. Not good enough for a real demo, but good enough to help the arranging process.

Now I need to figure out what the bass is playing throughout. Orchestral music isn’t always as straightforward as jazz when it comes to harmony. Sometimes there is no bass function at all! I had to analyze the overall harmony of each section and write in the chord changes as I went along. Now I can go back and fill in the orchestration and harmony.

Here is where I can make a lot of interesting choices to move away from what Holst wrote. I may take what was a standard major chord, and add the 4th as a tension. Or, take a minor chord and thicken it up with upper extensions closely voiced as a cluster. Now, I can use my harmonic language as a big band writer, and really explore the possibilities of this music.

Time for another Finale tip. Let’s look at bar 48 of Jupiter in the guitar part. You’ll see on beat three, I use a notation style to show the top voice of the guitar chord. This allows the player to voice it however they want, as long as the E is on top. To create this look, you can create a custom staff style.

It’s very easy to create it yourself using the settings below: 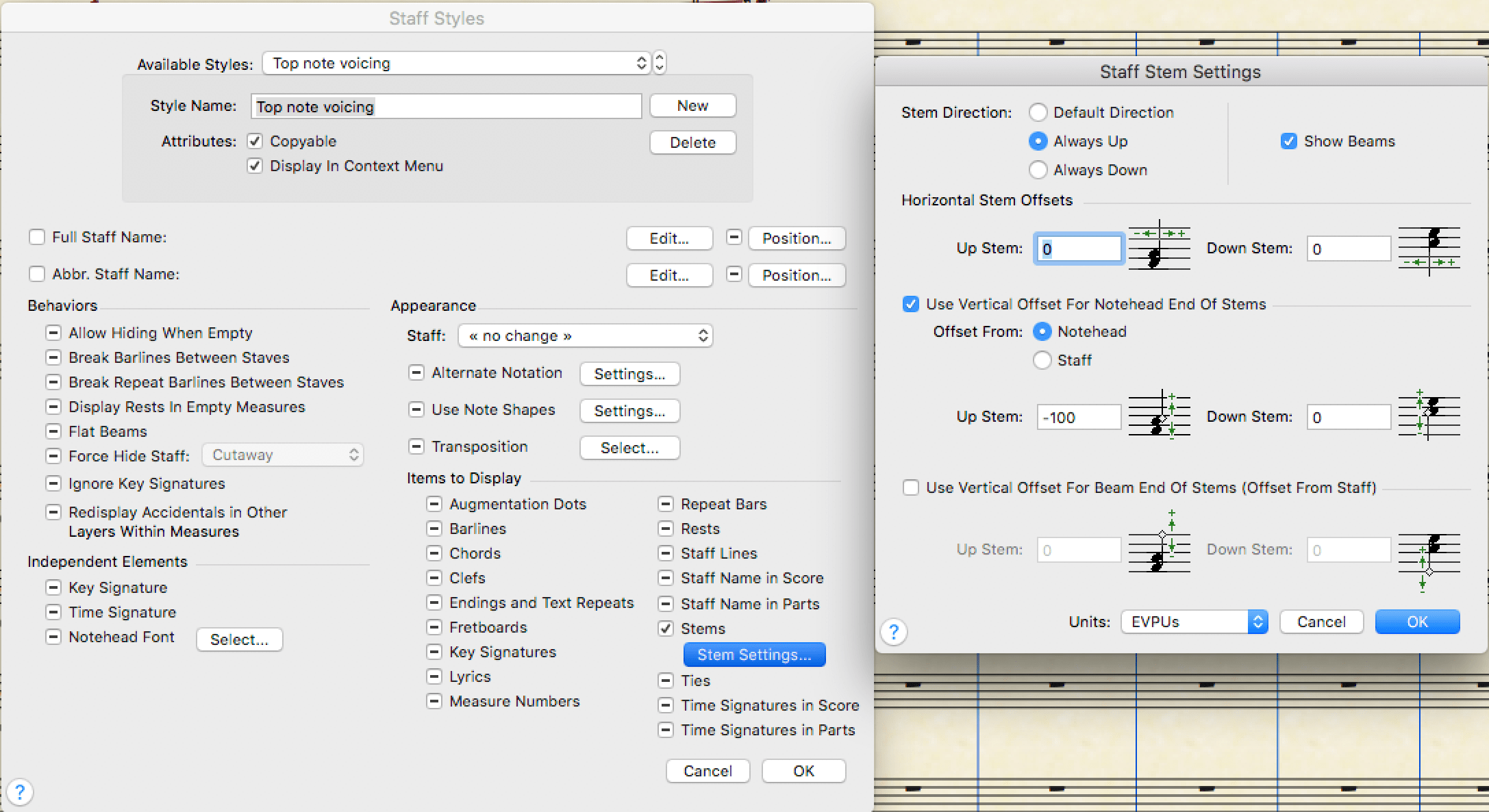 Another helpful Finale tip is to use custom smart shape lines to create an instruction with dotted line and an end hook. In this example, it is to tell the guitar and piano to play the 8th notes straight.

This sort of thing would also be used for writing drum fills over slash notation. To create this:

If it doesn’t look quite right, you can click on the Position… button to manually adjust the placement. This method is preferable to just writing a text expression, and drawing the stock hooked dotted line. The text and the line will be automatically connected, so there will never be any discrepancies between page formatting: 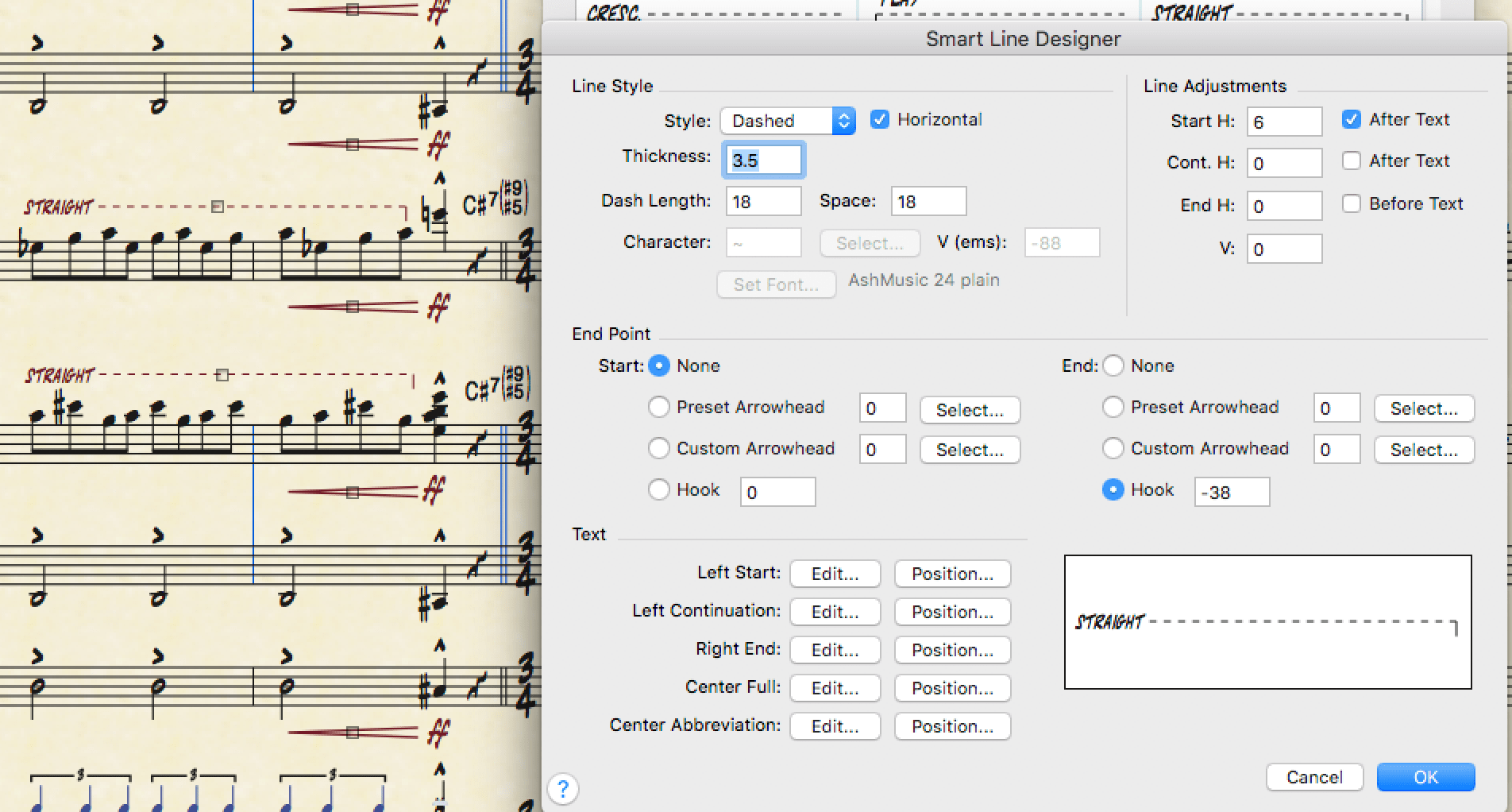 Towards the end, the arrangement becomes a jazz waltz with a saxophone soli. This section needed to be quite a bit faster to work, so I wrote a metric modulation to ease the transition. I set it up by writing quarter note triplets cascading across the band, that would then become the new quarter note. Later on, I do the exact reverse to get back to the original  tempo. To do that, I setup dotted quarter notes in the old tempo to become quarter notes in the new tempo. This is a great technique to effortlessly switch between tempos in jazz where there is a constant rhythm.

I hope you’ve enjoyed this brief look into “The Planets: Reimagined.” The studio recording is available from the project web site.

Katie Wardrobe of Midnight Music is offering a new online course with the goal of make your arranging tasks quicker...

I recently had the pleasure of serving again on the faculty of the NYU/ASCAP Foundation Film Scoring Workshop in Memory...