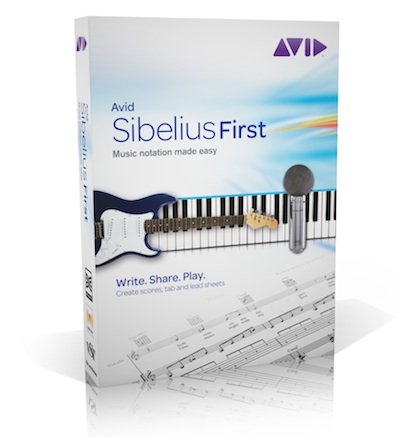 Today sees the launch of a major new version of Sibelius First, our entry-level music notation package for all musicians. Based on the multi award-winning Sibelius 6, but simpler and more streamlined, it’s the fast, fun and easy way to create beautiful scores to share and perform.

New features in this new version include:

There are plenty more details about this new product after the jump, but if you want to get started right away, check out the full information about the new version on the Sibelius web site, try out a fully-functional 30-day trial from the Sibelius web site, or purchase direct from us or from a reseller. If you already use Sibelius First, you will soon be able to purchase an upgrade direct from our web site (I’ll update this post when the upgrades are available).

Get the party started

One of the things we really wanted to achieve with the new Sibelius First was making the software friendlier than ever for folks using notation software for the first time. The most immediate way you’ll notice this is through the new Quick Start window, which appears when you run the program for the first time.

The Quick Start provides you with a simple way to kick off the most common tasks, such as starting a new score from scratch, importing a MIDI file, scanning printed music with the included PhotoScore Lite software, or even inputting music from a microphone using AudioScore Lite. You can also watch a short Guided Tour video, which takes you through the basic operation of the software in about three minutes.

Perhaps most exciting of all, though, is the Score Starter, which includes over 40 templates in 10 different styles of music, including rock, pop, blues, jazz, choral, classical, country, and so on. You can hear an example of each kind of music, then start a new score based on that style of music.

Each Score Starter template is set up for appropriate instruments, includes an initial riff or two to get you started (such as a bass line and a drum pattern, or an 8-bar introduction), and a set of pre-defined Ideas, which are little snippets or loops of music that can be auditioned in the Ideas window (simply click and hold the left mouse button on the one you want to hear), then copied and pasted into the score.

Furthermore, Sibelius First’s feature set has been carefully honed by cutting out some of the more advanced features from the full, professional version of Sibelius 6, leaving only those features that you absolutely need to produce beautiful printed scores or great-sounding audio tracks as quickly and easily as possible. This means that Sibelius First has a simpler user interface than the full Sibelius 6 package, with fewer menus and dialogs. Of course this means that Sibelius First isn’t as endlessly tweakable as its big brother, but unless you’re a teacher, publisher, or professional composer or arranger, Sibelius First should be more than powerful enough for your needs.

The initial version of Sibelius First was released nearly two years ago, and was at first only available in the United States and in Germany. Over time it gradually became available in more countries, but it was only ever available in English- and German-language versions.

With the new Sibelius First, though, we’ll be making the software available all over the world, and in six languages simultaneously: English, French, German, Italian, Spanish, and Japanese. Best of all, all six languages are built-in to the same application, so Sibelius First will run in the most appropriate default language based on your computer’s regional settings, but you can change the language used for menus, dialogs, keyboard shortcuts, instrument names, and so on at any time using the option in the Preferences dialog.

So what are you waiting for?

I hope you’ll enjoy using Sibelius First. If you already use the full Sibelius product, you can still install the 30-day trial version of Sibelius First to have a play with it, and no harm will come to your installation of Sibelius. And please recommend it to your family, friends and musical acquaintances. We hope that you, and they, will find it is the ideal introduction to music notation software.

I’m delighted to be able to announce that Avid has today released Sibelius 7, a major new version of our...