Just as we were wrapping up our coverage of the 2017 NAMM show in January — where we covered some of the latest developments in the world of music notation and technology — another product was being readied for release that wasn’t demoed at NAMM but would have fit in nicely.

That product is MusicJot, a music notation app for iPad produced by Mona Lisa Sound that has been in development for nearly five years. MusicJot is developed by Mona Lisa Sound’s founder, cellist and arranger John Reed, and software developer and instructor Mark Dalrymple. It combines palette selection entry with handwriting recognition using the MyScript Music SDK. 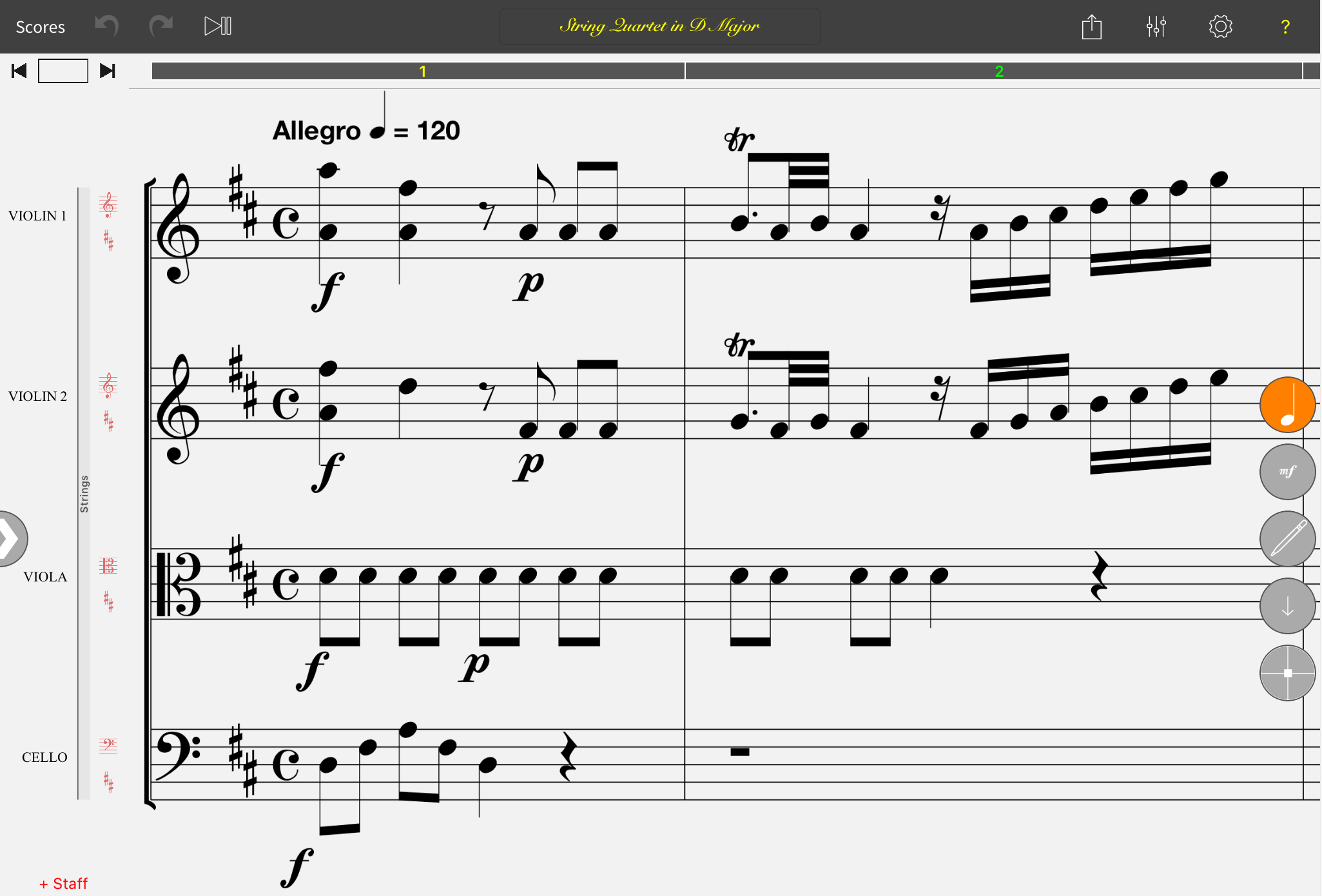 MusicJot was released on January 26 and is currently available for iPad on Apple’s App Store at an introductory price of $30 through March 15, 2017, after which the price will increase to $50.

MusicJot is only available for iPad and is optimized to take advantage of the combination of the Apple Pencil and the iPad Pro to get the best handwriting experience possible. Since I don’t possess either item (yet), rather than an exhaustive review we’ll take more of a “first look” approach to MusicJot using an iPad Air 2 and an Adonit Jot Pro passive stylus.

Mona Lisa Sound recommends an active stylus with pressure sensitivity and palm-rejection such as the Adonit Pixel if you don’t have the Apple Pencil, although MusicJot will run on an iPad 2 or newer. It’s also possible to use it without a stylus at all if you’re so inclined.

MusicJot has a series of short tutorials on its web site and within the app. As tempting as it may be to just dive right in, it’s highly advisable to work through these tutorials first to understand some of the basics.

MusicJot’s score setup offers pre-defined customary templates such as a brass quintet, wind quintet, string quartet and full orchestra, but also includes a robust Staff Chooser if you want to set up a custom score.

You can rename and reorder your instruments, and you can, impressively, set any custom transposition for the instrument you like, using the Interval and Key settings. These settings function the same way as they do in Finale’s Staff Transpositions dialog, where the Interval is the degree of transposition from sounding pitch and Key Alter modifies the key signature by adding sharps (or subtracting flats) with a positive number and adding flats (or subtracting sharps) with a negative number. 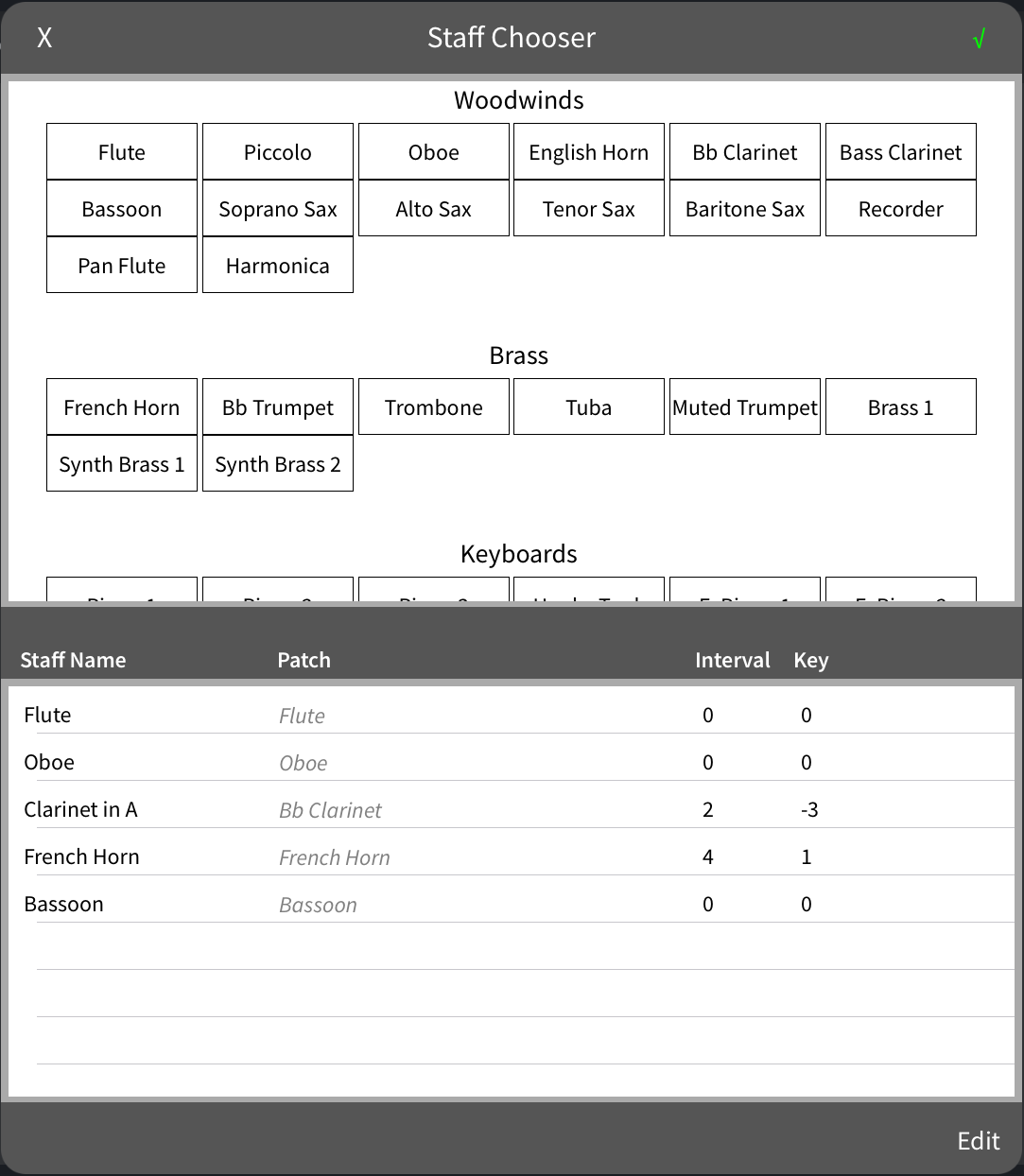 This can also be changed later by long-pressing on an instrument’s name in the score.

Many musical elements can be changed in MusicJot by calling up contextual panels. Double-tapping a clef, key or time signature, barline or repeat marking brings up a panel designed to work with those elements. A useful yellow question mark appears in the corner of these and other palettes with a quick tip, and often more detailed help is just a tap away by tapping Learn more…

The Clef tab functions as you’d expect, where changing the clef will change the position of the notes to accommodate the new clef. But it also has an option to hold the notes to the same position on the staff — useful if you thought you were composing in treble clef but were really in bass clef the whole time. 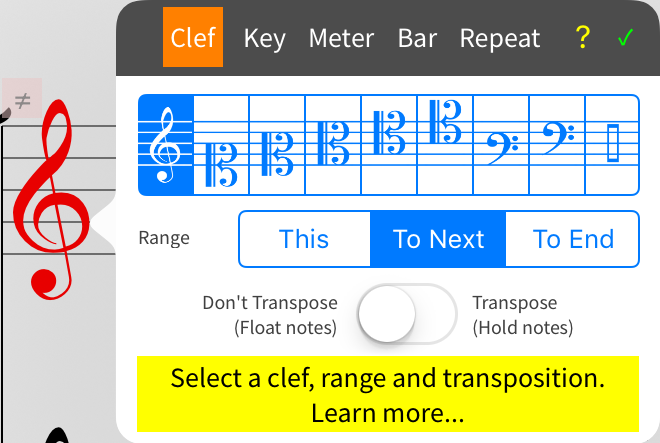 The Key tab is similarly intuitive and also includes an optional transposition option. 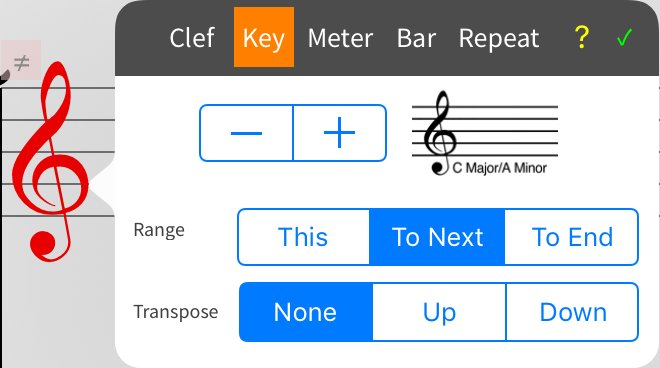 The Meter tab has, in addition to the customary options, a Legalize Measures feature where music is either clipped or rests added to comply with the new time signature. 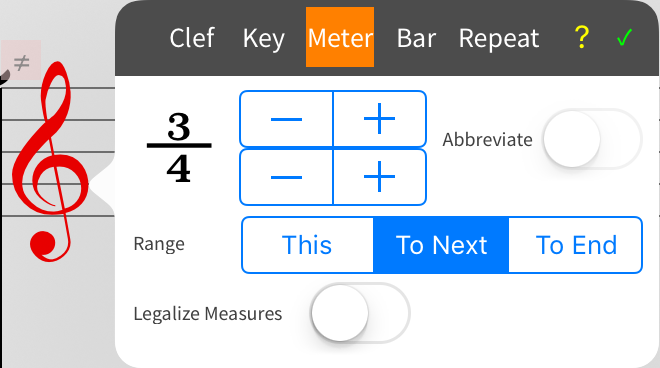 The Repeat tab is quite sophisticated, recalling some of Finale’s options. 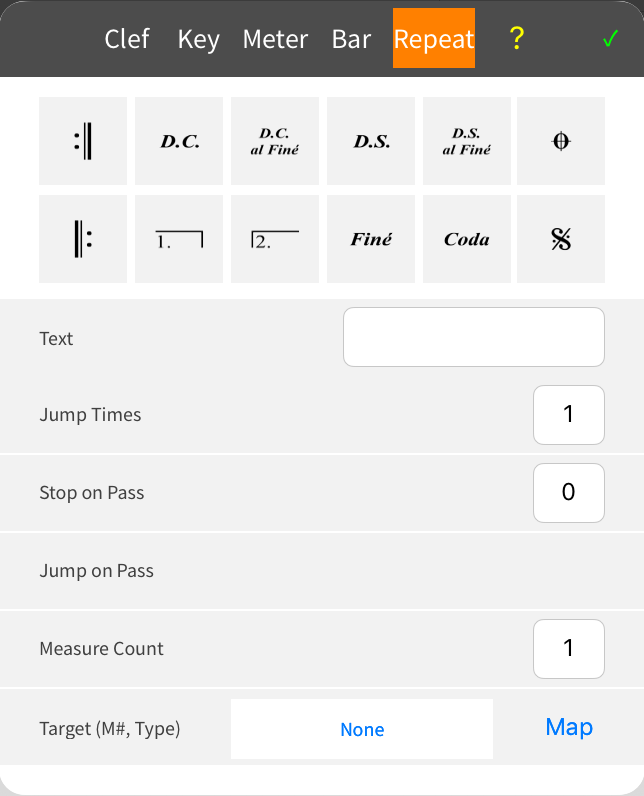 In general, I had the feeling that if MakeMusic designed an app for Finale users to use on iPad, this might be it. MusicJot’s workflow and terminology bears at least some resemblance to those used in Finale, and MakeMusic has given MusicJot permission to use its music fonts in the app (more on that later).

You can enter music into MusicJot by a series of taps along with use of its floating palettes.

Tapping in a bar within the staff will bring up a long green rectangle.

Once you lift your stylus (or finger), the note will appear.

Selecting and dragging a note up or down changes the pitch (the option to change the pitch chromatically or diatonically is controlled in a setting). Moreover, a helpful popup appears alerting you to the interval by which the original pitch is being changed.

A clever way to quickly change the duration of a note is to drag the stylus left, to shorten the note, or right, to lengthen it. You can select multiple notes at once — more on that shortly — so this a very useful way, say, to change a series of quarter notes into a series of eighth notes. (There is also a Change Durations feature in the Settings that can halve or double the note values.)

Tapping directly below or above a note will make a chord. Tapping outside of a staff will clear your selection.

The note palette actually includes a series of three sub-palettes: one for notes, one for rests, and one for accidentals and grace notes.

Expressions, dynamics, and shapes each have their own sub-palette. 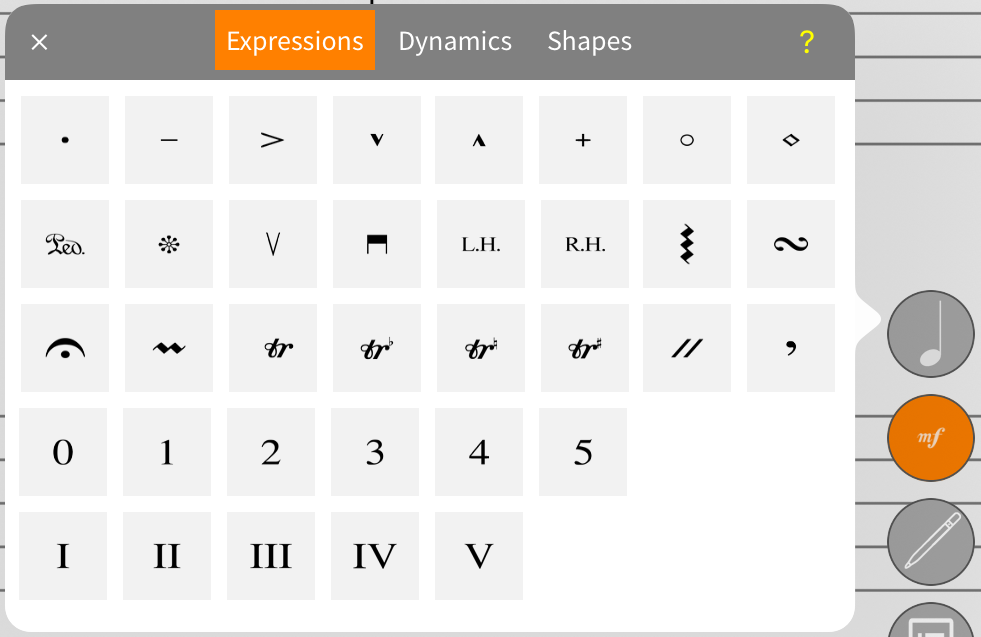 Once these items are selected, you can place them in your music.

Tapping on the pencil icon puts MusicJot into handwriting mode. The background subtly shifts, and once you start writing in a bar, an ivory paper-like rectangle defines the active bar. 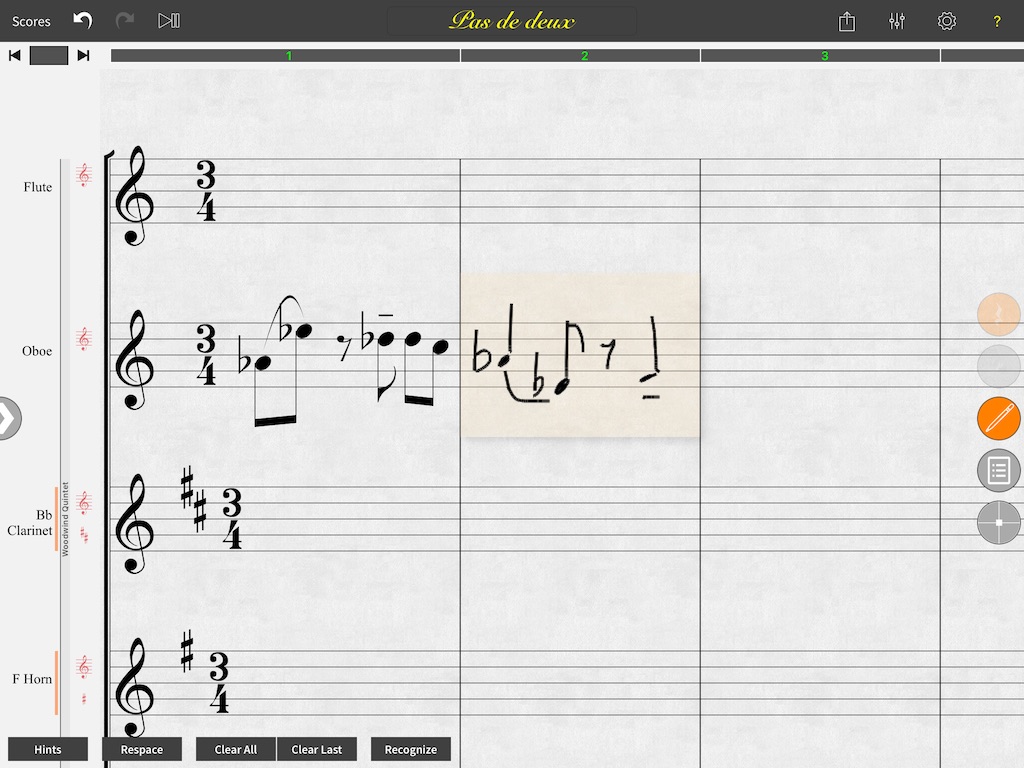 Tapping Recognize at the bottom of the screen, or simply tapping outside the bar or writing in another bar (like in StaffPad) will trigger recognition. 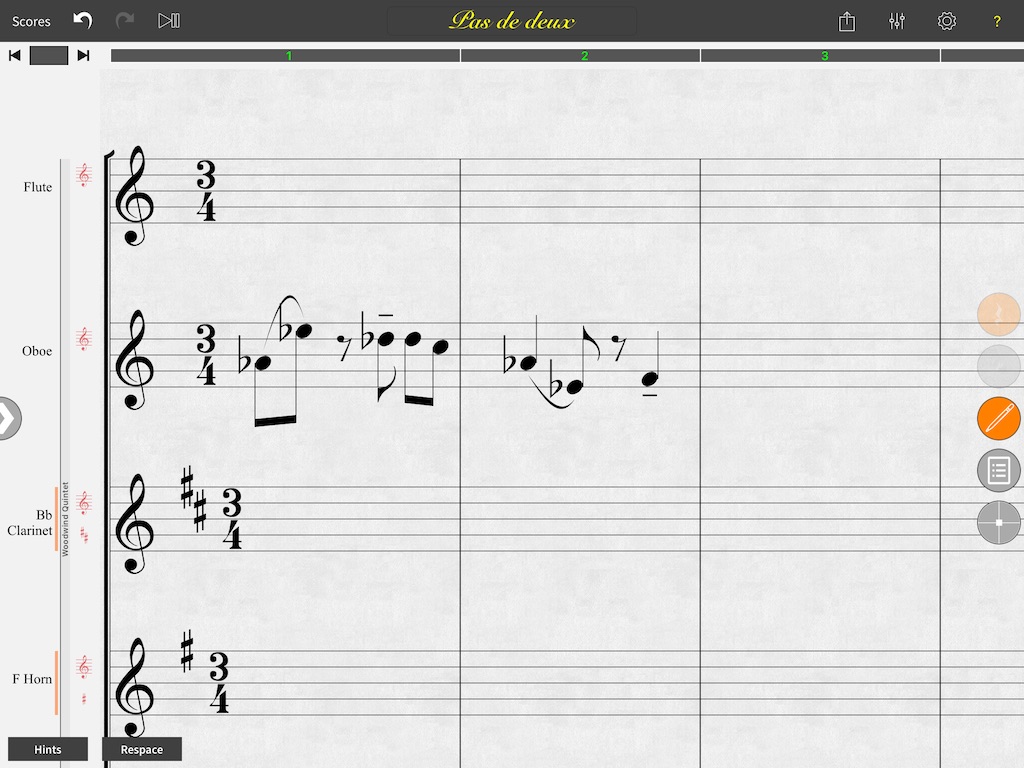 Notes (including tuplets), standard articulations and ornaments, rests, and slurs are all recognized using the MyScript handwriting recognition engine.

Clefs, key and time signatures, and barlines are also recognized.

Dynamics are not currently recognized in handwriting mode.

If you run out of space in the bar, you can tap and drag on the barline separator in the measure bar near the top of the screen to extend it as needed.

When you’re finished, you can tap and hold (long press) on the measure bar to reset the width to its default value.

Quite simply, tapping on a clef, time signature, note, etc. selects that item and turns it red. When selecting notes in this manner, you can select multiple notes by simply tapping on each note to add each one to the selection.

Selecting multiple notes in handwriting mode is accomplished by drawing a complete enclosure around the notes to be selected. The enclosure must extend above and below the staff.

In palette mode, you can select multiple notes by double-tapping outside the staff and then dragging to create a marquee selection.

You can also double-tap a bar to select the entire bar.

A selection is cleared by tapping outside of a bar.

Once any selection is made, a context-sensitive menu appears at the bottom of the screen, from which you can delete, cut, or copy music, change the octave, or repeat the music.

There’s so much more to MusicJot that is beyond the scope of this first look.

For instance, you can optionally display or hide various elements in your score by using a Layers menu in a menu that appears from the left side of the screen.

Lyrics are added via a Lyric Manager in the Settings menu, although there is no way to directly type them into the score at this time.

Playback is controlled via an Audio Panel from which you can “scrub” the music — a very helpful feature for quickly checking notes.

There is a Virtual Pointer which can also be used for scrubbing the music or as a kind of magnifying glass to work in an area with more precise detail.

Advanced settings for a dizzying panoply of items for everything from the weight of the staff lines to various text and spacing options are offered. 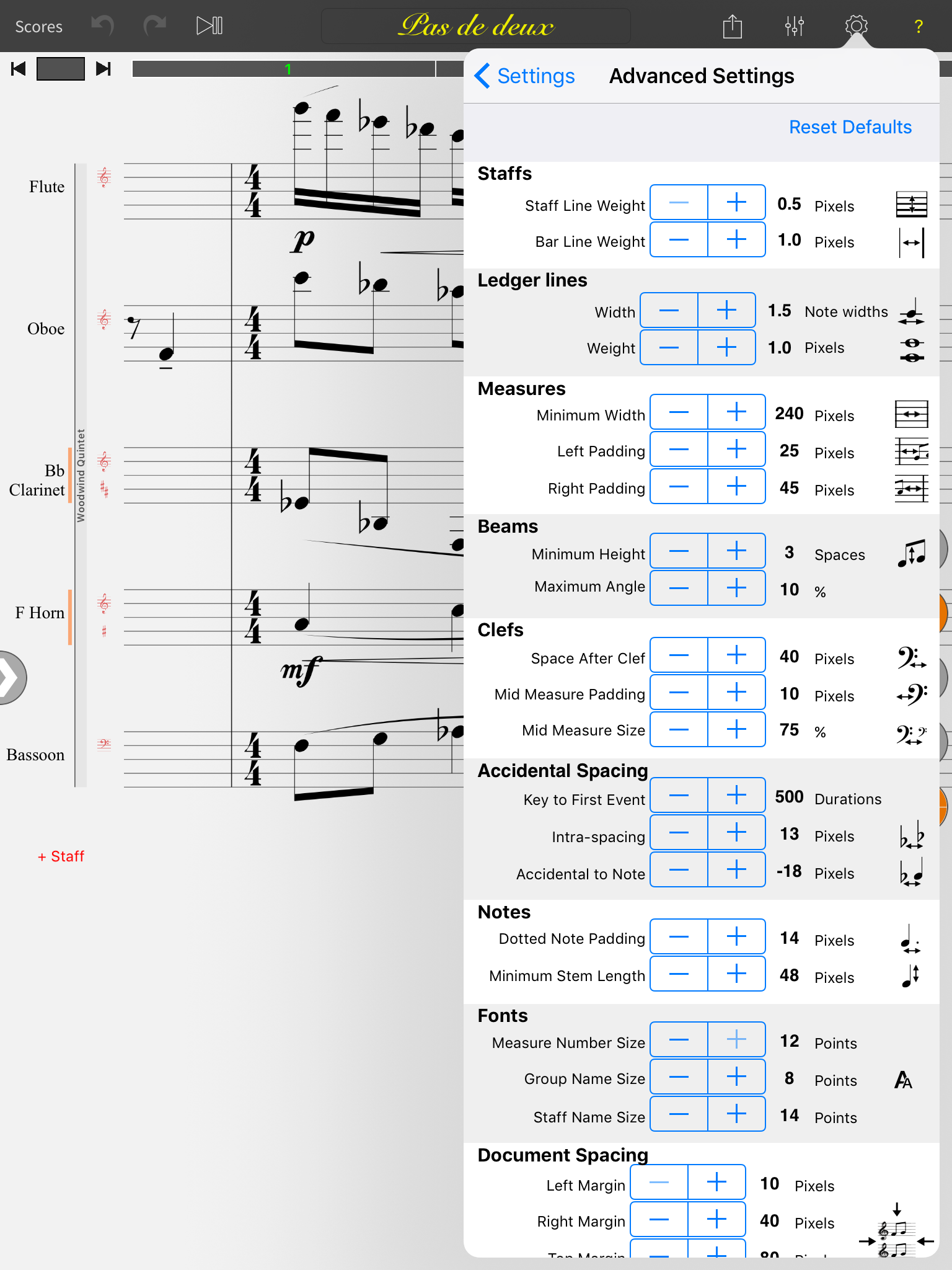 It’s good that, after more than four years of development, MusicJot is finally available. Clearly the developers have devoted an enormous of time and effort into creating this app, and it does a great many things that only a few years ago would have seemed revolutionary on a tablet.

The number of advanced features and settings which have only been briefly explored here are rare, if not unique, in a tablet music notation app — especially for a first version.

However, there are a few notable omissions:

There are already some unique features like the layers (in the left slide-out panel) and the virtual pointer. But most of the uniqueness will be in forthcoming compositional tools which we have planned. My goal is not so much to make MusicJot a notation tool for the sake of notating, but a compositional tool using standard notation. In other words — something actually useful for arrangers such as myself. Right now, getting the music engine and handwriting full-featured is job one – then we can start adding the fun stuff.

It’s clear, then, the goal of MusicJot is to be as fully-featured as possible. One wonders if this is the correct approach for a tablet-based music notation app, but if it succeeds, it could well be its strength in what is becoming a crowded market.

MusicJot’s most apparent weaknesses — ironically, for an app with so many tweakable options — are its output and UI design. The look of the music is sub-par (slurs, in particular, are poor), with basic errors like the default placement of eighth note rests. Although MusicJot is using MakeMusic’s respectable Maestro font for dynamics, most of the primary items such as the clefs, accidentals and notes appear to be drawn in the Petrucci font — a trip down memory lane, and not a pleasant one.

Fonts and musical appearance aside, the interface is challenging from a user perspective. Palettes, sub-palettes, tabs, slide-out menus, and contextual menus all abound from every edge of the screen. It was difficult to aim my stylus on the tiny buttons and icons that make up much of MusicJot’s working environment.

To be fair, if I was working on an iPad Pro instead of a regular-sized iPad Air, I might feel less crammed, and surely an Apple Pencil would have given me more precision in my taps and strokes. Even so, I suspect I would still miss the true pen-and-touch interface of the Surface Pro, and it makes me appreciate all the more why it’s hardly a trivial matter to create something as elegant as StaffPad for iOS.

Handwriting recognition using MyScript’s engine is quite good for the symbols it supports. That’s where the future is promising for MusicJot, especially if MyScript’s innovations in interactive ink technology and its Nebo app eventually propagate to uses that involve writing music.

The positive news is that MusicJot already has a foundation of many good features. If the rough edges of the interface can be smoothed and the musical appearance improved to at least an adequate level, there is potential for MusicJot to realize its inventor’s dream of becoming a serious compositional tool on iPad.

Despite its early drawbacks, there’s a lot to recommend MusicJot. If you’re looking for a way to notate music on your iPad, or even if you think such an endeavor is worth supporting, the $30 introductory price (until March 15, 2017) is more than fair for what you’ll get.

Komp, the latest music handwriting recognition and scoring app for iPad, is now available after several years of development and...