In April of last year I wrote about the Xkey 25-key mobile keyboard controller,

a MIDI keyboard made by CME. The Xkey caters to both the mobile musician seeking a lightweight controller and the more stationary user with limited desktop space.

Generally I fall into the latter category, and I was so pleased with the Xkey that after testing it became my note-entry tool of choice. Its simple design belied a surprisingly sophisticated feature set, with polyphonic aftertouch and many customizable settings via the free Xkey Plus app, for PC, Mac, and iOS.

But having only two octaves available was somewhat limiting. Like just about all portable MIDI keyboards, the Xkey 25 includes octave adjustment buttons, which I found myself pressing often. And if I wanted to actually play a musical passage into a sequencer or notation program (as opposed to doing step-time entry), I found the two-octave range limiting.

So when Xkeys came out with a 37-key version, I wanted to see if it mitigated those shortcomings. After several months working with it, I can happily report that it does so, and then some.

In most respects the Xkey 37 closely resembles it’s older (but smaller) sibling, with the addition of the extra octave. It has the same slim profile (just 3.9mm high) and aluminum body. The velocity-sensitive keys allow for a degree of expressiveness in your playing, although CME’s marketing hyperbole — “Shut your eyes and you’ll think you’re playing a regular piano” — is a wild stretch unless you have never actually played a real piano or even a weighted keyboard.

The Xkey 37 has the same customized “slim” version of the micro USB (micro-B) cable to connect to your computer or tablet (iPad users will need the Lightning to USB Camera Adapter). The octave adjustment, modulation, pitch bend and sustain buttons are still there.

It’s interesting how the addition of just one octave can make a world of difference, though. When using the Xkey 37 for step-time entry, you can cover nearly the entire range of most instruments without needing to switch back and forth using the octave key. And when playing in real-time, you can actually play a reasonable amount of two-handed music comfortably.

It’s that latter improvement that no doubt led CME to add the best new feature of the Xkey 37: an included cable with sustain and expression pedal inputs, and MIDI OUT capabilities. The proprietary Xcable plugs into the left side of the Xkey 37, and splits three ways. The MIDI OUT is a traditional 5-pin plug, and the sustain and expression pedals are the standard 1/4″ headphone-style jack that allow you to connect those pedals directly to the keyboard.

The free Xkey Plus app for PC, Mac, and iOS is updated regularly. The app isn’t necessary to work with the Xkey — the keyboard is fully class-compliant, meaning it’s simply plug-and-play — but advanced users will appreciate the ability to save configurations and customize settings down to the sensitivity of each individual key, should it be necessary. 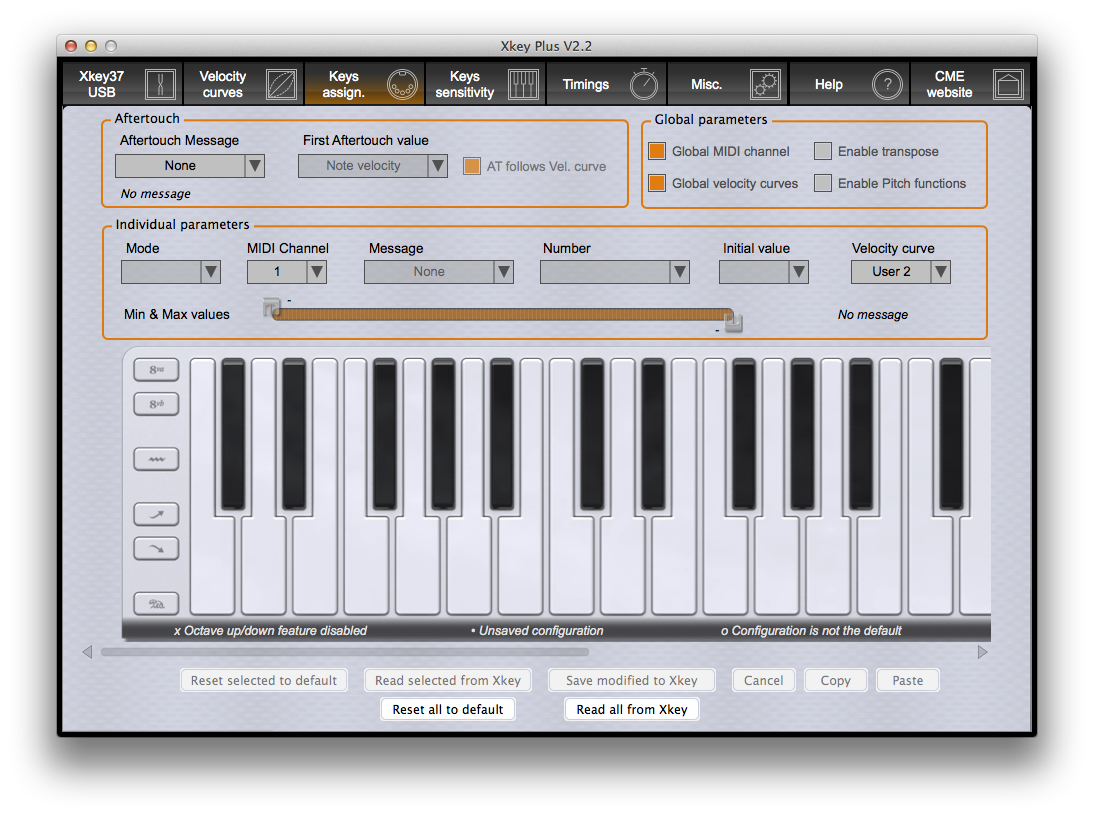 As far as portability is concerned, the Xkey 37 weighs in just shy of 2 lbs (880g), so it’s unlikely to break your back. Its length might be a more awkward factor; at 22 inches, you’ll need a bag large enough to accommodate it comfortably.

At $200 from most retailers like Amazon and Sweetwater (£149 from Amazon in the UK), the Xkey 37 is double the cost of its smaller 25-key sibling. For some, the price may seem steep for what seems, on the surface, like such a slight device. But beneath that simplicity is some pretty impressive engineering, and if you’re on the road a lot or are looking for a note-entry companion to your music software that looks great and doesn’t overpower the rest of your workspace, the XKey 37 fits the bill nicely.

A review of CME's XKey MIDI keyboard, a slim yet sophisticated 25-key controller that works well with Sibelius and other...