After the Pori Chords font for Sibelius was introduced in December 2018, and especially since the major release of the complete Pori suite and full support for angled slash chords (ASC) in Pori, Norfolk, and Norfolk Sans in April 2019, the fonts have been downloaded thousands of times and are already finding a home in charts around the globe.

Now that the recent updates in Sibelius 2019.5 have fixed a problem with the ASC fonts that occurred when printing directly from Sibelius (as opposed to exporting to PDF), the ASC fonts are even more fully supported in Sibelius.

With that in mind, I’ve endeavored to make the ASC fonts even better so that they are as easy as possible to use while adding even more features for power users.

The main change that existing users should be aware of is a change to the baseline of the ASC fonts that will better align them with non-slashed chords in most instances. I’ve also added Scandinavian chord language and Nashville Number System support. There are a number of other features that are available when entering chords in legacy mode, as well. Read on to learn about these.

All of the changes apply to the ASC/ASL versions of Pori, Norfolk, and Norfolk Sans, except where indicated.

This latest version of ASC has a repositioned baseline for angled slash chords. This was necessary so that these chords don’t find themselves getting too close to the staff below. Essentially, they are now raised to sit at a mid baseline level, somewhat centered alongside normal chords.

This positioning makes entering mixed chord types easier and with less repositioning after the fact. If you still prefer the old baseline behavior for ASC chords, where their chord portions are horizontally aligned, this can still be had by adding a switch in legacy chord mode. More about this below.

Care must be taken if you open your current scores with this ASC font update installed. In most cases, it will alter the vertical positioning of your chords. However, as magnetic layout handles these slash chords much better with this mid baseline setting, your new scores will surely benefit from the change.

Scandinavian chord language users will be happy to learn that the H letter is now fully integrated with all ASC slash routines, giving it the same positional properties and type case variants as those for A-G.

The angled slashes in Pori Chords ASC have had their radius pitched up further for an improved look. In addition, Pori, Norfolk, and Norfolk Sans ASC/ASL now include a new tighter angled slash. This new slash does not have a dedicated key for entry. Instead, entering the slash key, as per usual, will call up the new slash automatically where appropriate. This is because not all slash chords are shaped alike. 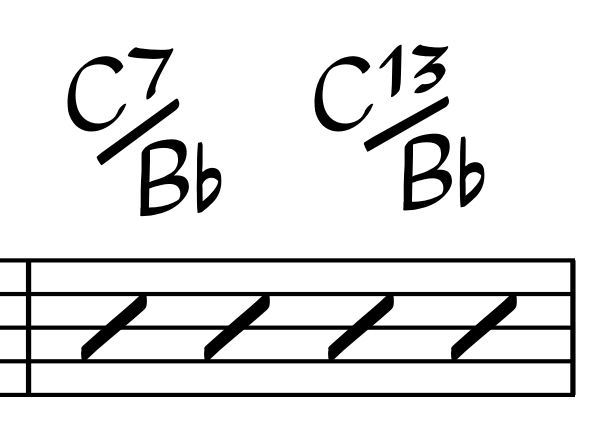 Nevertheless, this new slash can still be toggle-selected and applied to any chord, if desired. More about this below.

When creating chord symbols with large baseline numbers (i.e. Bb7), these will now kern properly to all angled slashes. These chords will always have their angled slashes positioned in the traditional way, at the end of the chord.

Thanks to requests and feedback from our Scandinavian users, all ASC fonts support H chords in Scandinavian chord language mode. Sibelius currently allows H chords to transpose in normal chord mode only, not in legacy. This is understandable as normal chord entry is the faster and easier of the two input modes. However, given all the flexible special key functions ASC offers in legacy mode, it’s a pity to not have H chords transpose here as well.

This update to ASC changes that. With the addition of a switch, H chords created in legacy mode now obtain transposition properties for all ASC fonts. Quite simply, a H chord is created in the same way it’s done in normal chord entry; by entering B for H. Adding a lowercase “h” at the end of the input string will substitute the B for H, thus allowing it to transpose.

Scandinavian users are encouraged to apply this switch to all legacy chord symbols they create/convert. Yes, it’s one extra step, but the benefits of transposition are now reality. Of course, you can still create a H chord without applying the switch (by directly entering the H). It just won’t transpose.

While Nashville Number System (NNS) chords can be easily created via conversion, thanks to Bob Zawalich’s Nashville Chord Numbers plug-in (shipped with Sibelius), the Sibelius reference manual doesn’t go into much detail as to how to create a numbered chord from scratch. Theoretically, you can assign large number characters to keyboard shortcuts (as the baseline accidentals already have) and create Nashville chords this way. However, these large numbers aren’t recognized by the Nashville plug-in for conversion to normal lettered chords. This is because the plug-in, justifiably, looks for default (superscript) numbers and accidentals as its input string.

Furthermore, chord entry using the above method can be tedious at best. Instead, Nashville chord users now have the ability to create their chords almost as quickly as lettered chords in normal mode, simply by typing in the accidentals and numbers with the default Sibelius keystrokes. New routines in ASC take care of the rest, as they substitute the default characters for the larger baseline characters automatically upon input. Thus, entry is almost effortless and results are quick.

Given the ease in which these NNS chords can now be created in ASC, it’s comforting to know that the Nashville plug-in can successfully convert them from numbers to normal chords. However, at the moment, it can only convert them without any special switches applied. Also, while converting from normal chords to Nashville does work, the resulting chord will not be displayed with the ASC font itself. Instead, it will be replaced. This is because of the way the plug-in currently functions. These limitations are being discussed and may indeed be addressed in a future Sibelius release; so stay tuned.

The inclusion of NNS in the ASC fonts also provides the added benefit of creating hybrid chords, where combining lettered roots with a slash numbered bass are now possible. The transposition of such chords work as they should; transposing the root portion only and leaving the bass number intact.

Because of the special routines the font uses to construct a Nashville chord, there are but two chord type exceptions that will require an extra step. The first of which is when creating an abbreviated 1(omit5) chord in the form of a 13 (as shown below). This can be done by overriding the default superscript routine with the ! (exclamation). If the 13 input is followed by a slash, the override will happen automatically, thus 13/ will result. Baseline chord numbers from two to seven are not affected by this restriction.

The second exception is when creating isolated, non-parentheses, chord elements consisting of single digits, or paired with an accidental i.e. b5 or #5. To get these at their default superscript setting, either precede or follow input with Option-Space on Mac or  Ctrl+Space on PC, or add `­­` double backticks on the end.

If you feel a particular passage of ASC chords requires a default baseline, or you still prefer the default baseline instead of the new mid baseline setting, you can apply a lowercase y at the end of the chord string to override its setting. Once applied, the ASC chord’s root portion will horizontally align with non-ASC chords.

Applying z once or twice at end of a chord string will toggle between slash types (three each for angled and linear). Except for the new tighter angled slash, you can still enter your slash type directly. However, I’m confident most of you will find this toggle method a convenient alternative.

N.B. Because the new tighter angled slash doesn’t have a dedicated keystroke, toggle-selecting is the only way to apply it to chords that don’t have it substituted by default.

Confident that most users favor the tucked angled slash position for complex chords, sometimes, a traditional end-of-chord position suits the score or passage better. In this case, applying ! (exclamation) at the end of the chord string does just that; overriding the slash position routine for those chords where the angled slash has been tucked.

It is always encouraged to apply special function keys in a logical order, keeping double key functions like `­­` or zz together. Still, you won’t be faulted for decoupling these items. This is because all special key functions can now be applied in any sequence combination, but must all still be located at the end of the chord string.

With the growing number of special function switches, it’s quite possible to mistakenly enter one too many or incorrectly. To help avoid this, a visual alert has been added in the form of an * asterisk.

For instance, if you add one too many ``­­` backticks (fig.1), or z‘s, or perhaps unknowingly add another y to default the baseline, an * asterisk will appear, alerting you that you have either already entered that function, maximized its entry, or have entered a function in error. This alert should help avoid overloading the chord string with special keys. If an alert does appear, a backspace will be required before retrying to correctly enter the desired function.

The asterisk will also appear should you try to apply a slash toggle z for a chord that has a repositioned (tucked) slash. Here, you will be reminded that an ! (exclamation), to override the slash position, must first be applied before z. Only then will a z toggle take effect. (fig.2)

Finally, in the event that one needs to edit a chord symbol to add an accidental to its bass letter, and having forgotten that a special function had been previously applied, you’ll see an asterisk, rather than an out of place accidental. (fig.3)

Other information and getting the updates

One note about Pori Chords Std and Pori Plain Chords Std(the non-ASC versions): As a result of the attention given to Scandinavian chord symbol support, the H character has been widened. 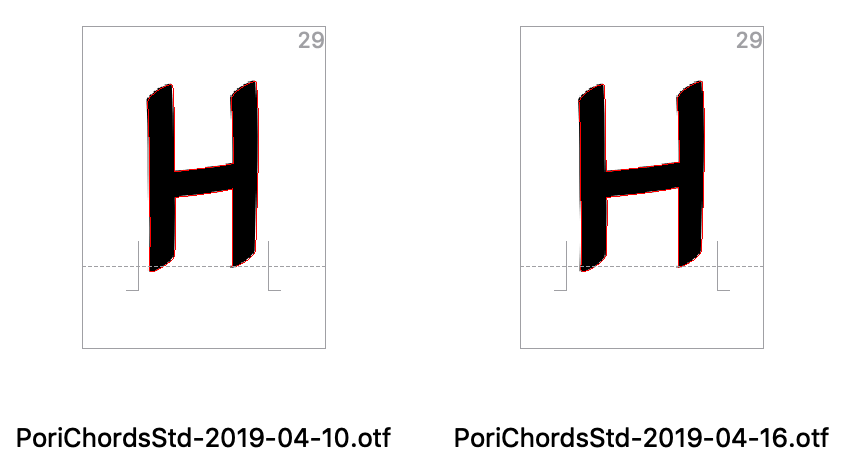 I hope you enjoy all of these updates to the angled slash chords! Once again, thanks go out to Philip Rothman, Jeff Kellem, Bob Zawalich and Robin Walker for their assistance with this update, the entire Avid Sibelius team for helping to get these ASC fonts to play nice on printout, and to one of many fellow Scandinavian users, Jørgen Malo, who brought up the H factor and kindly assisted in its testing.

If you’ve already downloaded these fonts, the updates are available from the same download link in your original e-mail confirmation, or you can go to the NYC Music Services web site and enter your e-mail address at Order Lookup / Get Updates to download the update (please don’t create a new order).

If you haven’t yet downloaded the Pori or Norfolk fonts, you can do so at the NYC Music Services web site.