The making of "Vote" - Scoring Notes
Skip to content

Motivated equally by a sense of civic duty and procrastination, I recently created something that is a public service announcement, visual art, and musical statement. The result is this special arrangement of “America the Beautiful” that is apparent to anyone who “reads” music.

I thought it would be fun to go behind the scenes of the making of this video for Scoring Notes readers.

Before we continue, a message: In the US, an important election is underway. The deadline to vote is Tuesday, November 3, 2020. Times vary by locality, and depending on where you live, you may be able to vote early or by mail.

For information about how and when to vote, consult your local board of elections, and if you don’t know where to start, head over to Vote.org to find your information and to learn about your rights as a voter.

The inspiration for “Vote” came to me when I took a break from work and quite literally sat back in my chair and looked up: 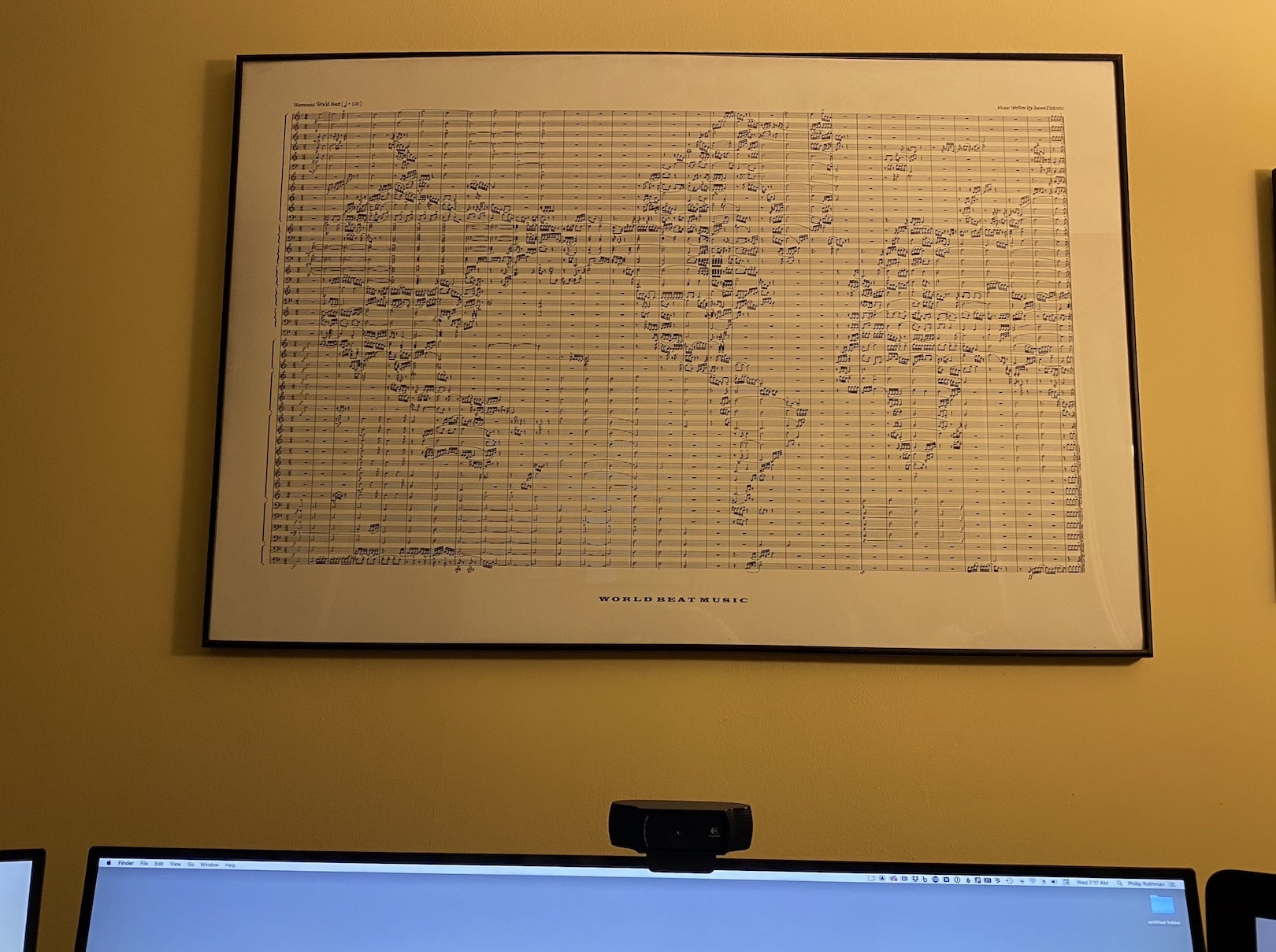 I picked up James Plakovic’s World Beat Music in a map shop in Seattle in 2001 and it’s been hanging above my desk ever since. So I thought, why not apply the concept to spell out “VOTE” and have a little fun with it?

Fortunately, I had the perfect composition to start with: “America the Beautiful”, beloved as a favorite patriotic hymn, and in some cases doubling as the US’s unofficial second national anthem, is well-known. I was commissioned by Carnegie Hall to create a new arrangement of the tune in 2014 for the National Youth Orchestra of the USA, and it has subsequently been performed by orchestras nationwide as well as by the US military bands.

I decided to overlay the music that would spell out “VOTE” on top of the existing arrangement, and effectively created a separate woodwind and brass section quite literally on top of the score. Quickly, though, I realized that I would need the bottom staves to be very active in order to spell out the “O” and “E”, so instead of creating unrealistic bass trombone and tuba parts there, I had the bottom two staves occupied by the grand staff of a harp. 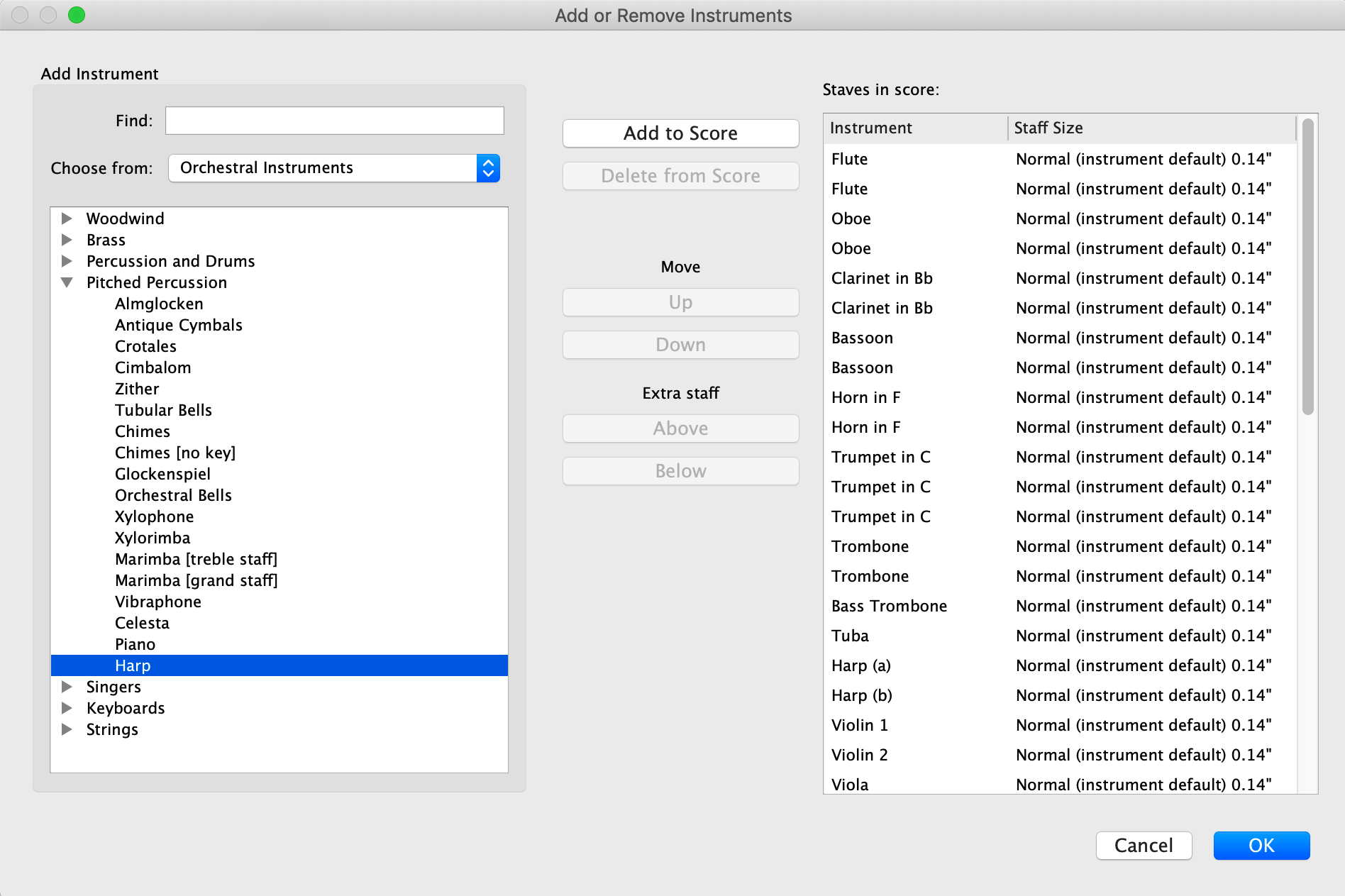 I also moved the existing string section, which carried the tune and essential harmonies, immediately below my new staves. Hidden from view, but still heard in the arrangement, are the existing wind, brass, and percussion parts, which careful score-readers have noticed and commented on. Hey — as in a democracy, in music, we take liberties!

The next important step was to create a “grid” so that each note value would occupy roughly the same amount of visual space proportionate to its duration. In music, note spacing is a combination of formulas, aesthetics and context, but, it’s actually quite rare for, say, a bar containing only a whole note to be exactly 32 times the width of a bar full of 32nd notes, the way you might see in the “piano roll” view of a sequencer.

Yet that’s what was called for here. Sibelius does not offer any such option to space the music this way automatically, and while I suppose I could have played around with the numbers in Appearance > House Style > Note Spacing Rule, it was easier to just plop a bunch of 32nd rests into a blank staff to force the music to be spaced correctly.

It wasn’t totally precise, but it was close enough for my purpose. This allowed me to lay out the letters in roughly equal proportions.

From there, it was just a matter of some visual foresight and musical chops. I just worked in sequence with each letter, and while I can’t exactly say the choices I made were brilliant from a musical standpoint, they got the job done in a few hours’ time.

I retained the slurs and the handful of articulations I used, but hid most of the dynamics so as not to over-clutter the score.

Once I was ready to capture the image, I switched off Hidden Objects in View > Invisibles.

Speaking of the image, naturally, page layout was unimportant, so I always worked in Panorama (Sibelius’s version of scroll or galley view).

Capturing the audio and visual assets

From there I should have been able to hit Play and export my video, right? Not quite.

Making the video created an interesting dilemma. When playing back a score or exporting a video from Sibelius and other desktop notation programs, the playback line moves from left to right on the screen. When the line reaches the end of the screen, a new screenful of music appears, and the playback line jumps back to the left of the screen. It wasn’t the effect I was going for, which was a more DAW-like perspective such as that which is achieved in Logic by turning on Scroll in Play, where the playhead makes its way to the center of the screen and then stays there while the music scrolls smoothly by.

StaffPad does this brilliantly, by the way:

In Sibelius, some post-production was necessary to achieve this effect.

I first took three separate screenshots of my score in Panorama. Then I carefully stitched them together in a graphics program (I use Graphic):

Next, I took the composite graphic and brought it into Screenflow, my software of choice when making screencasts and tutorial videos.

I also exported the audio file from Sibelius in the usual manner by going to File > Export > Audio, and brought that music track into Screenflow as well as a reference. I wanted a little more control over the balance between the “VOTE” music and the rest of the music, so I ended up exporting each separately. I could have done that by muting various staves in the Mixer, but it was easier to just use Bob Zawalich’s Export Selection As Audio plug-in, so that’s what I did.

For the playhead, it’s just fakery — I created a narrow green line in Graphic and brought that into Screenflow.

From there, it was just a fair amount of tweaking and adjusting to get the timing and pacing of the music right, relative to their positions on screen. I used Screenflow’s automation tools, which it calls Actions, to automate the movement of the playhead until it got to the center of the screen, and then I started automating my composite graphic so that it scrolled across the screen. At the end of the score, it was the reverse — stop the music scrolling and resume the playhead automation until it got to the final barline.

The real results, though, will be in this election. Did you make sure you exercise your right to vote? If you enjoyed the video and learning how I made it, please do this: Vote in this election. Making a music video is easy work compared to the heroic efforts that so many people have made to ensure that we have the ability to cast a ballot.

Our NAMM 2018 coverage continues with Steve Morell, founder & CEO of NiceChart, the new online service that specializes in...

The Arlington Connection newspaper from Arlington, Virginia, USA, last week ran a story about a concert that took place last...