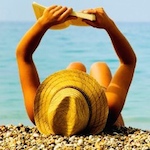 Summer is here — hooray! We’ve covered a lot of ground on the blog in the first half of 2014, but it’s entirely possible you’ve been too busy to catch up with everything.

No worries; enter that time-honored tradition, the summer reading list. Grab a cool drink and your favorite e-reader, and head to the beach with a roundup of some of the most popular blog posts from the past six months:

Sibelius 7.5 announced. This detailed review of the new features in Sibelius 7.5 will get you up to speed on the Timeline, playback improvements, sharing options and more.

Sibelius 7.5 released. Once you’ve read about Sibelius 7.5’s new features, read this post to learn a bit more about how to make the most of the new version, as well as to be aware of some quirks in the 7.5.0 version. (Avid has said a Sibelius 7.5.1 update is in the works, and is to be expected soon.)

Get Started Fast series for Sibelius 7.5. In this five-part video tutorial series that I created for Avid, you can learn the basics of the software (and experienced users might discover a thing or two as well).

Use the semicolon to input grace notes. This shortcut was introduced in Sibelius 7; the post also marks the debut of the animated GIF on the blog. A bonus: discover some more shortcuts that date back to the early days of Sibelius. (Also: a record for the number semicolons used in a post. Take that, Kurt Vonnegut!)

Move notes up or down chromatically. Speaking of new shortcuts added in Sibelius 7, this recent post was popular with Sibelius veterans and newbies alike.

Position Rehearsal Marks plug-in. A long-requested feature has been addressed by Bob Zawalich’s plug-in, which is designed to center rehearsal marks at the start of a system horizontally over the clef.

Float Rests plug-in. This one actually appeared during the 2013 holiday season: addressing another Sibelius deficiency, Bob created this tool to automatically move all the rests contained within a beam group so that the beam is positioned normally.

How I upgraded my music workstation and lived to tell about it. I was delighted to have made a few new friends after chronicling the upgrade process for both hardware and software on a new Mac Pro.

NotateMe 2 is released. The popular music handwriting app for mobile devices saw a number of improvements.

Hands-on with the Xkey MIDI keyboard and with the AirTurn BT-105. These two separate product reviews can help you decide whether any new gadgets are in your future.

Fraudster sentenced to prison for duping musicians in elaborate schemes. This detailed piece, part investigative story, part personal recollection, tells the truly bizarre tale of a young man who used multiple aliases to con dozens of composer and orchestrators on a multi-year binge which finally landed him jail.

Bruce Broughton speaks about his rescinded Oscar nomination. Our exclusive interview with the composer whose Oscar-nominated song was taken away by the Academy of Motion Picture Arts and Sciences.

Leland Smith obituary. Appearing in the very last days of 2013, this piece about the creator of the SCORE typography system includes contributions by mater engravers Bill Holab and Tom Brodhead.

Avid Everywhere and the possible future direction of Sibelius. I spoke with Avid’s Andrew Wild about the company’s new strategic vision.

MOLA presentation: a comparison of Finale and Sibelius. A guide to the advantages of using one program or the other, as presented to the annual conference of orchestra librarians.

Create lead sheets in “The Real Book” style. A step-by-step tutorial on how to hide clefs, key signatures, and adjust other settings to get the look you want, in both programs.

Swap the contents of two staves. Both programs have free, downloadable plug-ins to automate this otherwise tedious task.

Manually adjust staves and systems. Have a look at this new video tutorial on how to independently move a staff or a system without affecting other staves on the same page, in your Sibelius and Finale scores.

Don’t forget, we also brushed up appearances around the blog not too long ago, to make it easy for you to find all your favorite posts. Enjoy your summer!

In case you missed any blog posts this year, or want to refresh your memory as you sip egg nog,...