Summer is rapidly coming to an end, coinciding the beginning of another active season of music production in New York. So, while I had the chance, I decided to take a few days to visit some colleagues in London to catch up on all the latest. Fortunately (for me) they were working hard during the summer and hadn’t skipped town. Despite their busy schedules, they managed to make some time to visit with me, and I was so grateful that they did.

It’s heartening to be reminded that there is a worldwide community of talented individuals in our field doing talented work. Readers of this blog will surely recognize many of the names and faces here. Enjoy this virtual travelog!

My London adventure started with a visit with Sibelius product manager Sam Butler and composer / orchestrator / music preparer Tom Curran. You may know Tom from his venerable plug-in Impose Sketch Onto Template, which has proved invaluable in our work, greatly reducing the time and improving the accuracy of transferring MIDI files and piano sketches into pre-existing templates.

Sam, Tom and I had a good, long chat about the recent Sibelius updates and how the new features have proved immensely helpful in day-to-day composing and music preparation. Sam was very keen to hear our feedback about what could be useful in the future, and I was very happy to learn of the mutual experiences that Tom and I had in our day-to-day work.

Then it was off to the Steinberg office in the Shoreditch neighborhood of London. With the Dorico 2.1 release having come out just one day prior to my visit, I expected the team to be kicking back and starting happy hour early. But no — they were already hard at work on the next update, with thousands of lines of code spread across a great many computer screens, developing features that Steinberg product marketing manager Daniel Spreadbury referenced in his recent blog post.

Missing from the photo above was Anthony Hughes, whose videos have quickly gained a loyal following among Dorico users and users-to-be. He had already left they office when we took the photo, but I did get to meet him and he kindly greeted me in his signature baritone by saying, “Thanks for watching“.

I then headed out with Daniel and Ben Timms, Steinberg’s UK head of scoring research and development, to meet up with David William Hearn. As readers may know, David is StaffPad’s co-founder and lead designer. It was exciting to chat with David in light of the recent development update that he posted on the StaffPad blog, where he said that they are up to some “mind-bogglingly complicated” stuff. StaffPad was groundbreaking when it was released just three years ago, and David is working hard at achieving, in his words, “a technical marvel” in the next update.

From there, it was off to Abbey Road Studios to visit with legendary music preparer Jill Streater. Although we had worked together on several projects, I had never met Jill in person before this trip. As delightful as she is to deal with on the phone and over e-mail, she is even more so face-to-face. Quite quickly our conversation turned into a fun nerd-a-thon about printers, paper, taping and binding, fonts, Sibelius plug-ins, and much more. At one point she eagerly grabbed a ream of her favorite A3 score paper and I instantly recognized the familiar feeling, as will many readers.

I ended the trip by heading to the Royal Opera House to see my good friend and colleague Tony Rickard, music library manager of the opera and ballet. I first got to know Tony when he was president of the Major Orchestra Librarians’ Association (MOLA) during the year that the MOLA conference was in Helsinki, and we’ve stayed in close touch ever since. The ROH was getting ready for a production of the Ring Cycle, and Tony said that the set of parts they used dated back to hire materials from the 19th century. Here we are in the stacks amidst the music of some composers you may recognize:

Equally impressive was the Ricoh printer behind us in this photo. That is some serious hardware! 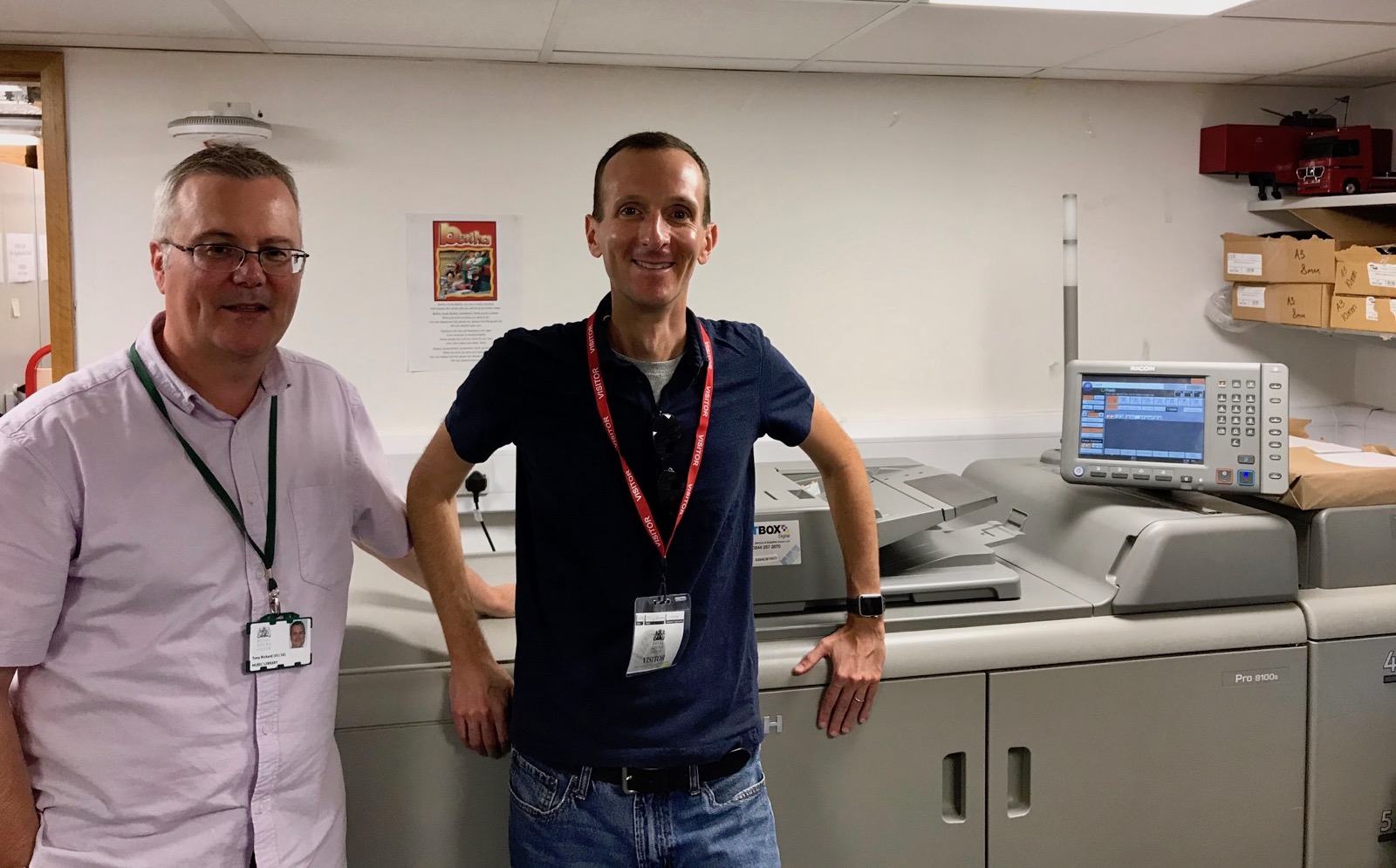 It was a terrific journey on all counts, and I can’t begin to express my gratitude to all of colleagues for arranging their schedules to spend a bit of time with me. They all mentioned that they enjoy reading this blog and the sense of community it helps give to our field.

Although my destinations weren’t exactly what you would find in the typical traveler’s guide, I can’t think of a better London itinerary for the professional music preparer. Thank you, London friends and colleagues! You are welcome in New York anytime.

A UK man has begun serving a prison sentence for committing brazen frauds against composers, orchestrators, and music publishers over...

In this Q&A we learn about the process of publishing new editions of music that's in public domain, as well...