In recognition of the new edition of “Rodeo”, we present a 1970 interview Aaron Copland gave to John Downey at the University of Wisconsin-Milwaukee about his works, his career, and the future of music. Listen now: 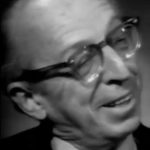 Scoring Notes
Aaron Copland, in his own words

Aaron Copland, in talking about his use of folk material for his iconic ballets like Rodeo, said, “It makes it easier for the listener if they can hear some well-known tune or familiar cowboy music. It makes it easier for them to hang onto the harmonies that might be a little different from the normal cowboy tune setting. I think that partly explains why those ballet scores are perhaps my most well-known pieces. The fact that is, they did make use of American folk material.

“You see,” Copland continued, “if you’re writing a ballet that’s set in the Far West, it obviously makes it easier to suggest the atmosphere of the Far West if you base your music on materials that had their origins there. Immediately, everybody knows where they are. They’re not in Scandinavia; they’re not in India; they’re in the Far West. I think it’s a great advantage to a composer to make use of such materials — though, of course, he has to do it in his own way. Anybody can arrange any tune, but a lot depends on what you do with it.”

When Aaron Copland thought of the Far West, he probably didn’t have Wisconsin in mind, but Milwaukee was the perfect location to “road test” the new edition of Rodeo.

For one, that quotation came from a conversation that Copland had in Milwaukee with professor John Downey, during Copland’s visit to the University of Wisconsin-Milwaukee on January 30, 1970. In that interview, Copland remarked, “Ballets begin as ideas in the heads of choreographers. They come to you and say, ‘I have an idea for a ballet, and would you [the composer] supply the music?’

“You just are supposed to dream up music that would seem to be danceable,” Copland said, “that would seem to fit the action that they plan to show you on the stage. It’s a rather hit or miss method, actually, and sometimes you might dream up a dance movement that they can’t use because it somehow doesn’t fit what they need. But I’ve had quite good luck with my choreographers. So those scores now seem to interest people quite apart from the ballet action; or they see the ballet action and imagine it for themselves when they listen to the ballet score.”

Downey accurately noted that “I suppose the proof of their great musical worth is the fact that they can be listened to in the concert hall, played by our symphony orchestras, and still a great deal of appreciation is, according to the listener, even minus the steps of the ballet.”

Copland and Downey couldn’t have known that 52 years later, the Milwaukee Symphony Orchestra would be where a new edition of Rodeo would first be performed in the concert hall, but they could not have been more accurate in describing the enduring appeal of this music.

Since 2010 I’ve worked with The Aaron Copland Fund for Music and Boosey & Hawkes to create new editions of Copland’s works. In my role as program advisor and editorial consultant on these projects I’ve been engraving the music anew and seeing that this music gets its rightful due in front of audiences and listeners.

The list of compositions to date includes the ballets Appalachian Spring and Billy the Kid, the Third Symphony, Old American Songs, Three Latin American Sketches, the Clarinet Concerto, as well as advising on a number of other works.

The impetus for working on Rodeo came from the the late composer Christopher Rouse, who had a distinguished tenure as the president of The Aaron Copland Fund for Music, which supports all of these projects. During a break in a meeting several years ago in which the new editions were being discussed, Chris approached me, and in his characteristically direct and enthusiastic way, said, “What about Rodeo?”

Rodeo ended up being the last project Chris approved before he died in 2019. After being on hold during the Covid pandemic, we finally finished it this summer, and, as we’ve done with other major works of Copland, needed to get it in front of a real live orchestra as one of the last steps in the process.

Maestro Ken-David Masur, librarian Paul Beck, and all of the musicians and staff of the Milwaukee Symphony Orchestra were the ideal partners to bring the new edition to life, participating in this project with enthusiasm and, crucially, a willingness to take a chance on playing from these new untested materials instead of their familiar, well-worn set.

The MSO’s role in the project came about through a fortunate combination of timing and my long collaboration with Paul Beck, one of my most trusted colleagues with whom I’ve worked for more than half my life (!). With my company NYC Music Services, Paul and I have collaborated on hundreds of projects over the years. After spending more than two decades in New York, with positions at The Metropolitan Opera, two stints at Juilliard, and Carnegie Hall’s National Youth Orchestra of the USA on his resume, Paul has returned to his native Milwaukee, and won the position of principal librarian for the MSO, beginning this season.

While the conductor and music director’s buy-in for an endeavor like this is absolutely essential for it to be green-lighted, the ultimate success of such a project will rest on the shoulders of the orchestra librarian. The librarian must not only make sure that the right music gets to the right people, but must also assume the additional challenges of transferring the players’ beloved bowings and annotations from their permanent set to the new set, as well as deal with any questions that may arise in the period leading up to, and during the rehearsals.

In this particular instance, as our time window narrowed, Paul took on the additional task of printing the music on-site from PDFs that I provided, easily saving a week or more in the production process and ensuring that both maestro and the players had adequate time to prepare.

With Rodeo, as I did with Billy the Kid and Appalachian Spring, my team prepared both the complete ballet and the suite (the “Four Dance Episodes”, in the case of Rodeo) simultaneously. This led to great efficiencies so that large sections did not need to be prepared twice, but it also meant that everything needed to be meticulously tracked.

Fortunately, I had a top team working with me: Joseph Trefler and Matthew Karaś catalogued hundreds of items large and small. We had the task of resolving errors and inconsistencies from the existing editions of both the ballet and suite, while trying our best to not introduce new mistakes along the way. Their work won praise from all involved, and made for a nearly error-free first rehearsal, and will ensure that Copland’s music gets the engraving it has always deserved.

Still, it’s important to remember that the process, at the end of the day, relies on human beings. Even this well-scrutinized edition still had a few items that needed to be corrected. The MSO players enthusiastically approached my desk during rehearsal breaks; sometimes they were confident in their reports, but other times left wondering if we had made a correction to a note that had been played incorrectly for decades.

One such example of the latter was when trumpet player Alan Campbell approached me about an A♭ in his part, and said, “I’ve been playing this as a B♭ for forty years; was I wrong this whole time?” After scrutinizing the score and part, we determined that the B♭ he had played for his entire career was indeed correct, and it was our edition that was mistaken. Hopefully Alan will be playing that B♭ for another forty years.

No matter how carefully we reviewed the music, that encounter, and several similar ones with other players, as well as with Ken and Paul, reminded me of how important it is to get the music in front of the musicians, who know the music better than anyone. I’m grateful that the Copland Fund supported this trip as a part of the editorial process.

It also reminded me of the enduring impact of Copland and the orchestral music he wrote. In that 1970 interview, when talking about the future of music, John Downey asked Aaron Copland, “Do you feel the orchestra will still be a meaningful medium for expression?”

Copland replied, “Well, I don’t see why not. After all, it is an extraordinarily varied medium. I don’t think it’s been exhausted in any way. And to just turn one’s back and forget about it would seem, to me, to be crazy. I mean, it’s impossible. Why should we forget the orchestra? You couldn’t possibly throw the nine symphonies of Beethoven away without being funny in the head!”

We've been "road testing" a new edition of the full ballet of Copland's Billy the Kid with the Peabody Symphony...