It’s been a busy time in the world of music notation software, and I’ve been keeping up as best I can, giving presentations here in New York at the NYU/ASCAP Film Scoring Workshop and in Montreal at the 2015 conference of the Major Orchestra Librarians’ Association. Yesterday I was also interviewed by SoundNotion. Here’s a quick roundup.

The fellows over at SoundNotion have been covering the world of new music news, week in and week out, for more than four years. I was delighted to be their guest yesterday during which I spoke with hosts David MacDonald and Sam Merciers about recent updates to Sibelius, my part 1 and part 2 interviews with Sibelius co-founder Ben Finn, and lots of other news and goodies about notation softwear. We even cooked up an idea for a Sibelius plug-in app store and, in complete gear geek-out mode, I demonstrate my automatic folding machine.

If you watch this interview or listen to it online or through iTunes, you are hereby considered a bona fide music notation nerd like the rest of us. Congratulations! It was great fun — I’m sure we could have gone on for several more hours.

The NYU/ASCAP Foundation Film Scoring Workshop gives aspiring film composers a chance to record a cue with an orchestra comprised of some of New York’s top professional freelance musicians. It’s the culmination of more than a week of intensive study, collaboration, and seminars about the craft and business of film music.

It’s been a pleasure to lead one of those seminars for many years: a music prep class that covers scoring, orchestration, and as many tips and tricks as we can cram into a three-hour session. This year’s class took place earlier this month, and, as usual, I found the participants extremely inquisitive and talented. We seamlessly moved back and forth between Sibelius and Finale, like when we talked about how to make large time signatures — thanks in part to Tim Davies’s blog post about Finale tips, which he graciously allowed me to “translate” for Sibelius users.

It will surely be exciting to see these composers continue to develop their skills, and I’m sure we’ll be hearing their music in “a theater near you” before too long.

For the second straight year I presented several sessions at the annual conference of the Major Orchestra Librarians’ Association (MOLA). This year’s conference, held in May, was located in Montreal and hosted by the Orchestre symphonique de Montréal. The focus of the sessions was once again on using Sibelius and Finale in the library, with specific attention being given to the types of situations that librarians are likely to deal with, like urgently needed transpositions and inserts.

In addition to presenting my sessions and attending some others, I enjoyed connecting with colleagues, taking particular delight in spending time with many librarians that I have gotten to know over many years via phone and e-mail, but had never met in person until last month. All the technology in the world can’t substitute for a shared beverage after a day of meetings! 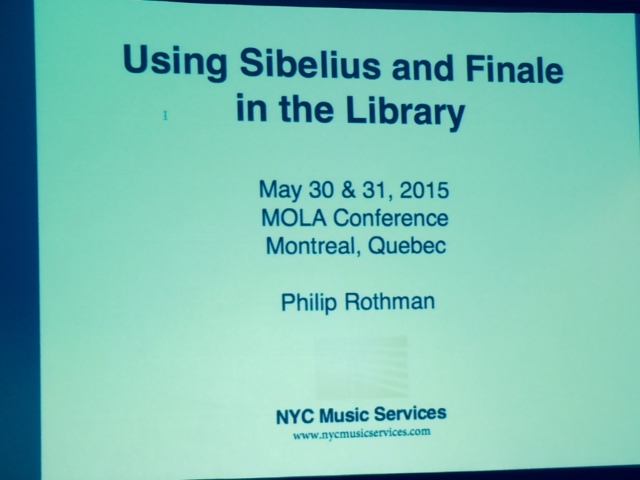 Three music conferences, one weekend, all in the Scoring Notes universe: MOLA, NAMM, and League of American Orchestras. We'll be...

An independent guide that compares certain features of the two leading commercial music notation applications, as prepared for the 2014...