David Newman’s magical score to Danny DeVito’s 1996 film Matilda perfectly captures the fancy of the original Roald Dahl story, the whimsy of DeVito’s adaptation, and the charm of Mara Wilson’s performance as the girl with special powers. So when David asked me to prepare the music for the premiere of the live orchestra version of the film with the Houston Symphony, naturally I was excited to help play a role in showcasing his music to both old and new fans alike.

The premiere performance was just this past Friday and it was a great success. Here’s how we got the music from the 1996 studio score to the 2017 concert stage.

Crucially, in addition to composing film and television scores, David is an authority on conducting film scores with live symphony orchestra, having conducted hundreds of performances worldwide of favorites like West Side Story, E.T. The Extra-Terrestrial, Back to the Future, On the Waterfront, Raiders of the Lost Ark, and many more, including the premiere this fall of the Star Wars film concert series with the New York Philharmonic. Of course, he was conducting the Matilda premiere, so we knew that preparing the score to his specifications would put us in good stead.

David was one of the earliest adopters of music notation technology, having actually used the now-obsolete program Erato Music Manuscriptor to score Matilda. After briefly considering the possibility of digitizing the scores and converting them to Sibelius files, we decided to create new scores from scratch — not only because of the sheer challenge of converting any scans of the files, but also because of the nature of what was needed to orchestrate them for the concert stage.

To help the process along, I created a Sibelius template for David and his unflappable assistant Max Mueller to use in entering the music. Then, they set about creating new files for the live orchestra score — 36 Sibelius files in all.

Once I received the files, I set about the process of doing the usual editing and formatting to get them ready for performance. I used Sibelius’s Append Score feature along with Neil Sands’s Tidy Appended Scores plug-in to consolidate the cues into Act 1 and Act 2 files, so that in the end I had a total of only four files for the whole show — two for each act, a score and parts file. (I’ll talk more about using dynamically linked parts in a future post.)

Along the way, in addition to keeping in close touch with David and Max, I was consulting other sources, like the spreadsheets containing streamer information, in addition to watching the movie several times, to make sure we prepared the score as accurately as possible. Regular communication with the Houston Symphony’s librarian Tom Takaro was also essential, in order to confirm instrumentation, doublings, percussion setups, and other necessary information. With only two rehearsals before the premiere performance, no detail was too small to overlook.

Once the soft files were proofed and completed, it was time to print — two score volumes totaling more than 300 pages and 76 bound parts containing all the music for the individual instruments. Within hours of printing everything, the music was on a plane Texas-bound to get into players’ hands as soon as possible. 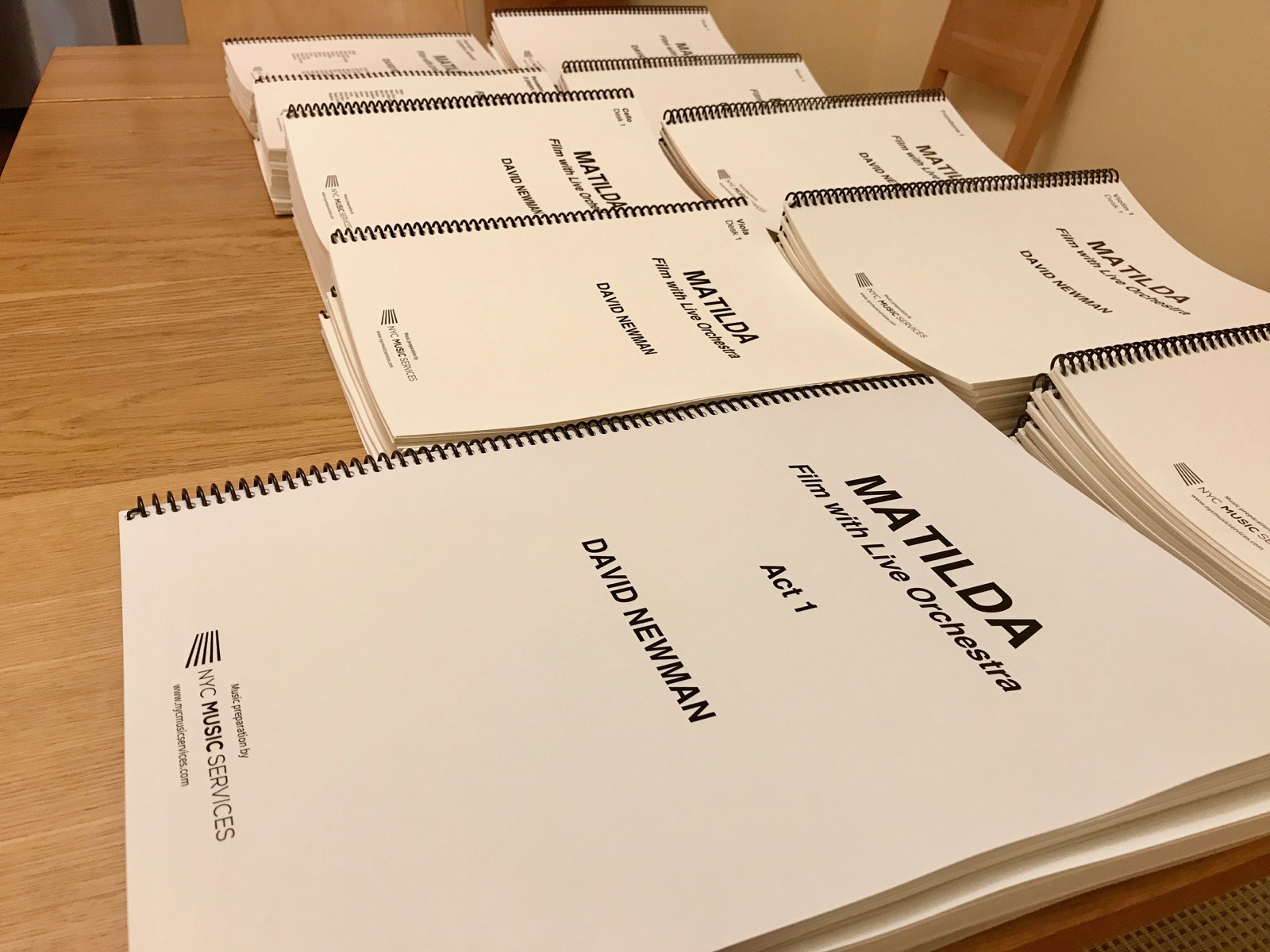 Because the premiere was at an outdoor performance venue about an hour north of Houston, I brought a mobile setup for rehearsals, consisting of a MacBook Pro connected to an iPad via Duet as a second display. This way I could have the score on one screen and the parts on the other, so if there was a question about a part I could quickly reference it. 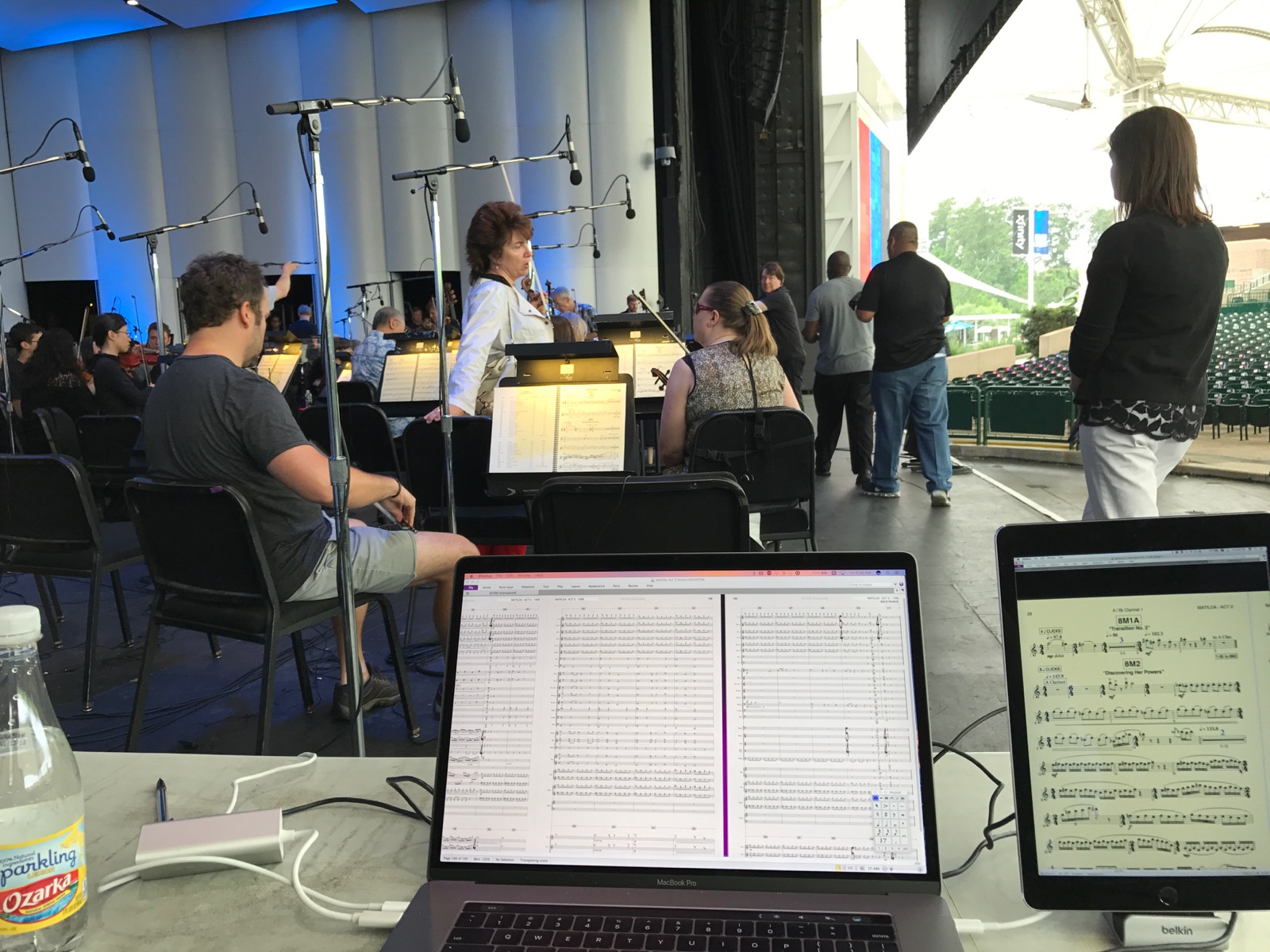 The first rehearsal went very smoothly, but we had some work ahead before the second (and final) rehearsal. There’s a boisterous Louis Prima-style swing section in the middle of a cue that needed to be re-orchestrated to better adapt it for a concert orchestra. Fortunately, in addition to the high-tech laptop/iPad setup, I brought along some tried-and-true analog tools to do some taping and inserts into the parts. 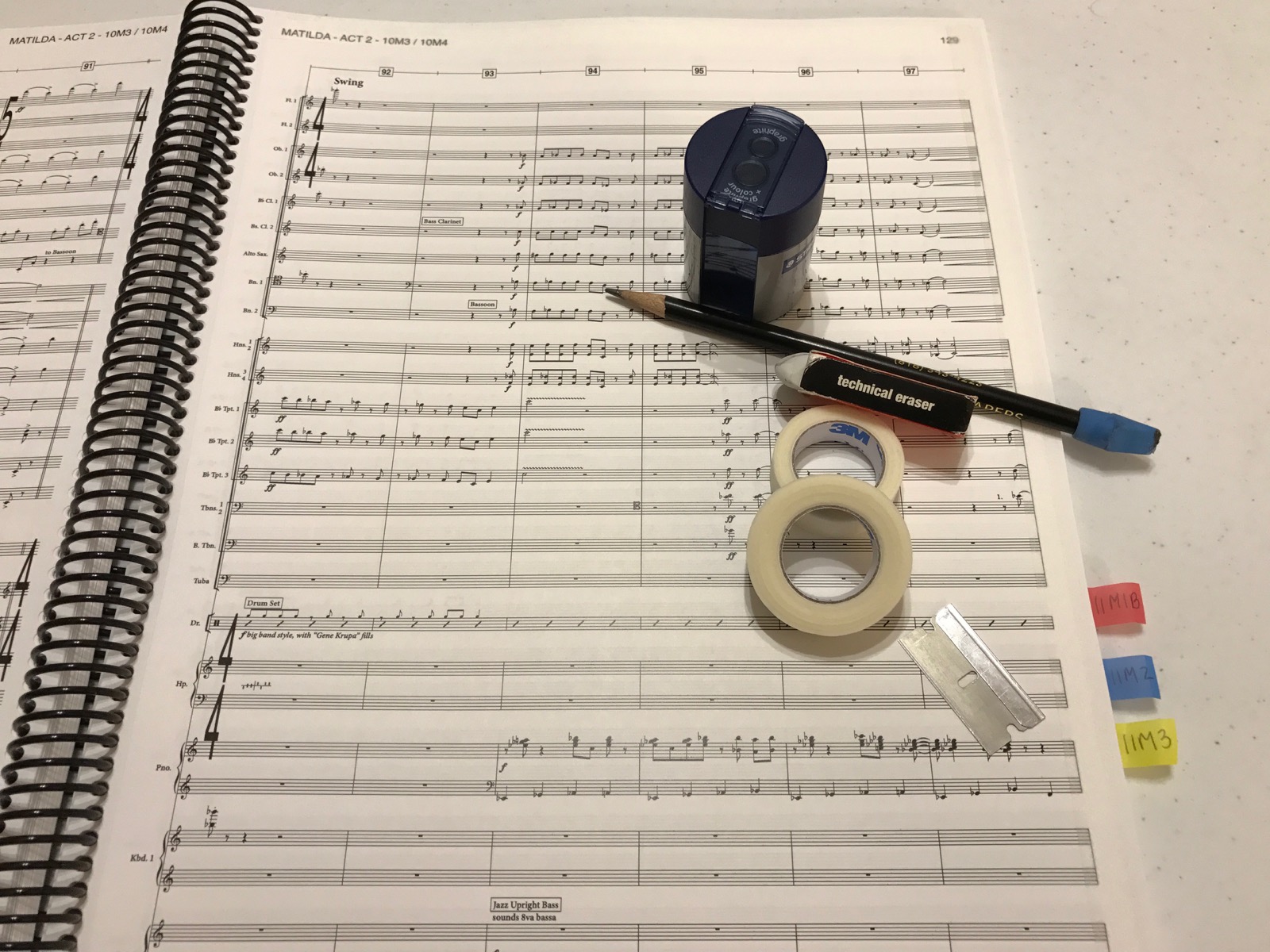 Max and I set to work, and a few hours and several rolls of 3M Micropore tape later, 10M3/10M4 “The End of Trunchbull” was ready to swing even better than before. We also had a request to transpose a section from B-flat to A Clarinet, which was easily accommodated, along with a few other changes.

The result was a thoroughly enjoyable performance with David conducting, Danny DeVito narrating live, and the Houston Symphony giving a first-rate interpretation of the score.

It goes without saying that the music preparation is but one element of a lot of moving parts that needed to function smoothly to make this premiere happen. From the musicians, to synth programming to live film production, orchestra and venue operations, and management, it was a tremendous experience working with so many experts at the top of their professions.

Backstage we took a moment to celebrate: 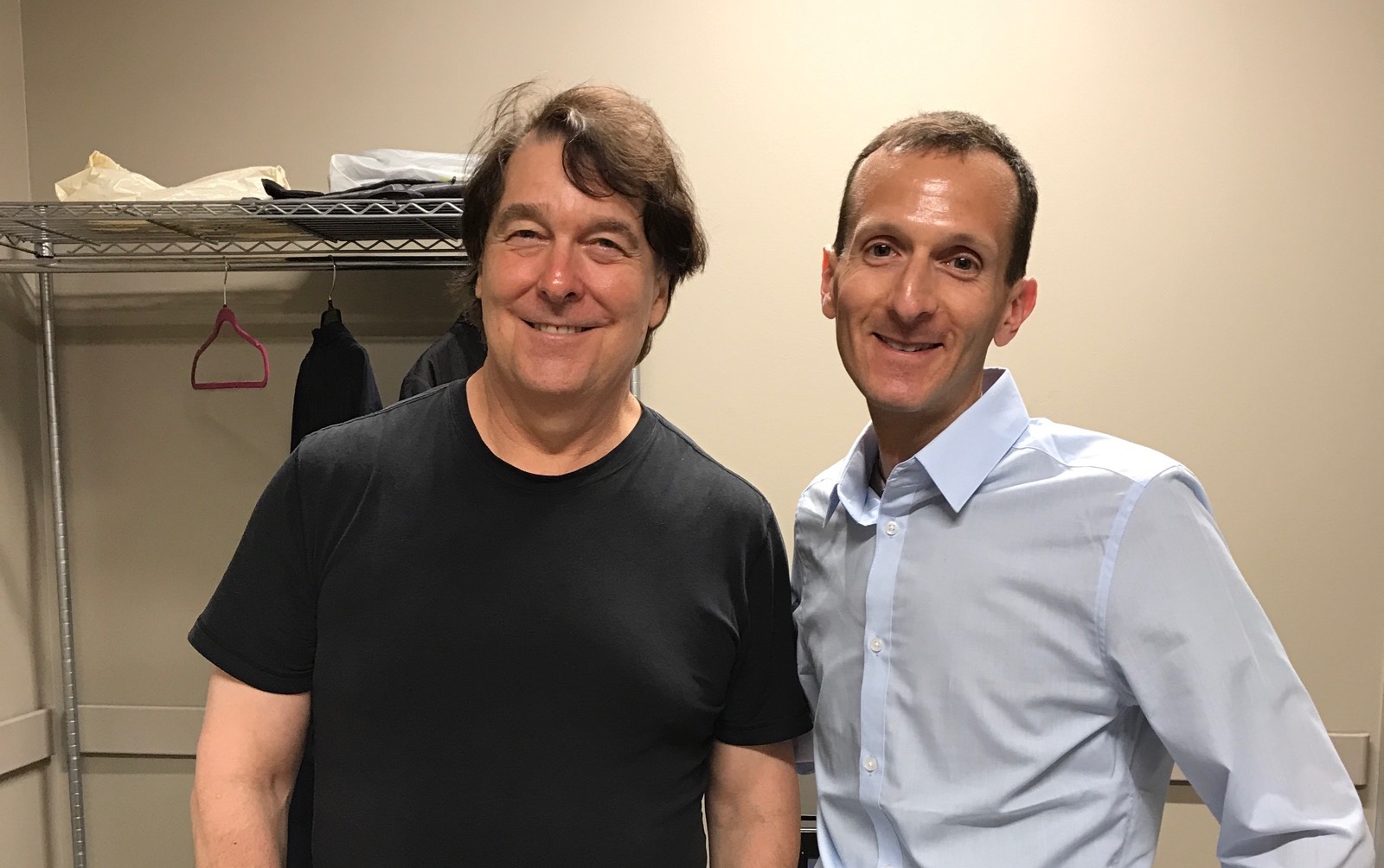 I hope that Matilda makes its way to a “symphony near you” so you can experience it!

The Kodak Theatre on Hollywood Boulevard in Los Angeles is the home of Cirque du Soleil’s latest spectacular show, a...