Now that we’re nearing its first anniversary, it’s time to welcome Notation Express for Musescore to the party.

It’s organized similarly to Notation Express for Sibelius and Dorico, but it’s been completely custom-programmed to work with Musescore along with many features tailored specifically to Musescore.

That’s not all — today there are significant updates to all the other flavors of Notation Express too. Everyone with an existing Notation Express profile for Sibelius and Dorico, in both the 15-key and XL configurations, will get improvements that add features and take advantage of the latest software releases.

We’ll get to all of that here, but let’s first have a look at the newest member of the family. 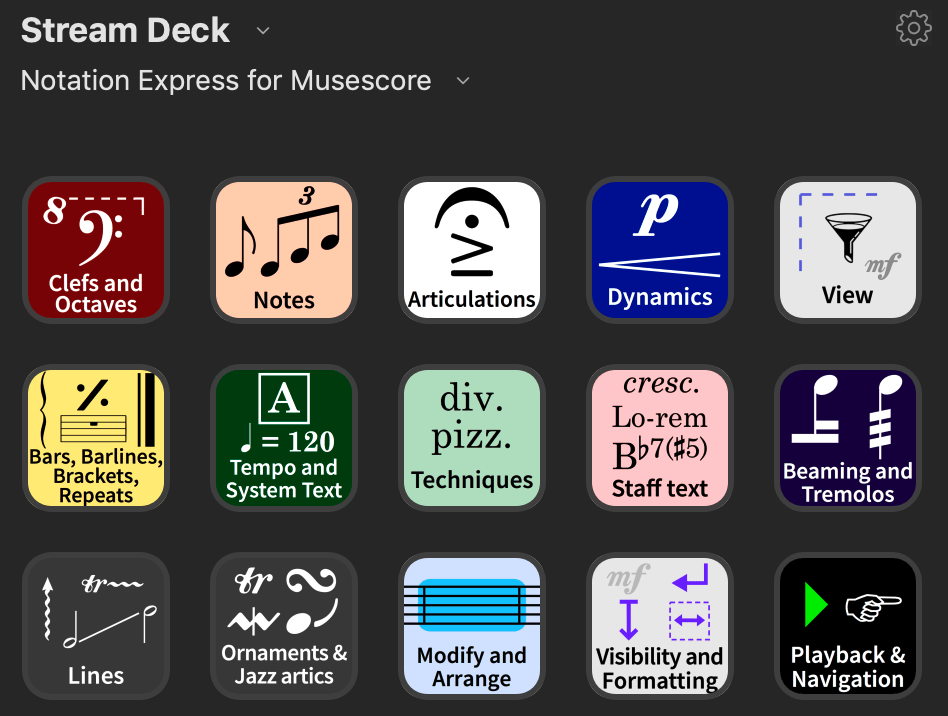 If you use Notation Express for Sibelius or Dorico already, you’ll feel right at home with the Musescore edition. Indeed, Notation Express is designed both for users of a single software platform and those users — like myself — that find themselves switching between several platforms regularly.

The most common barline variants are available, as are repeat barlines and endings. Adding, deleting, and inserting bars, repeat structures and more are all easily accessed. 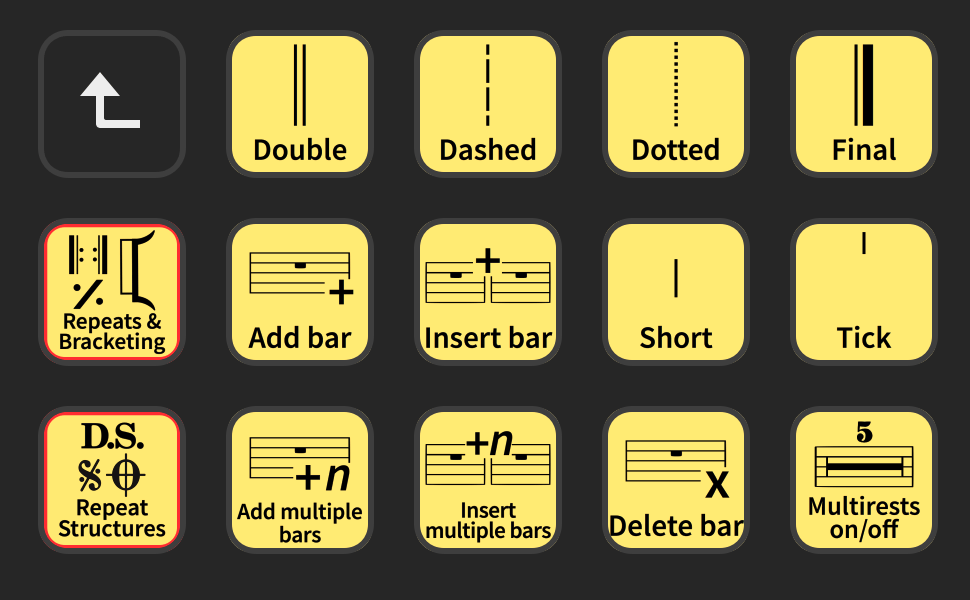 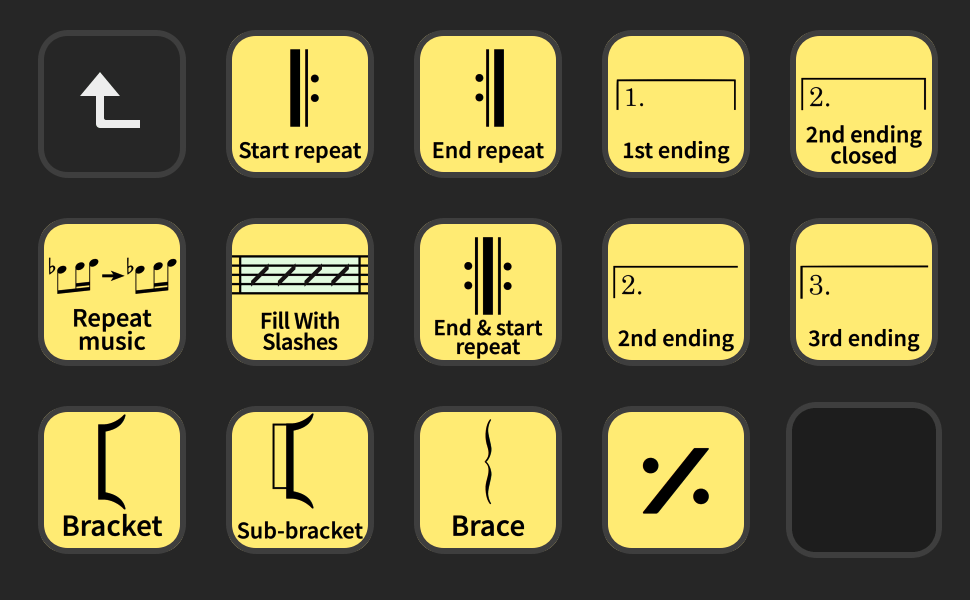 The Notes screen makes it easy to switch among Musescore’s methods of note input: step-time, re-pitch, and insert. 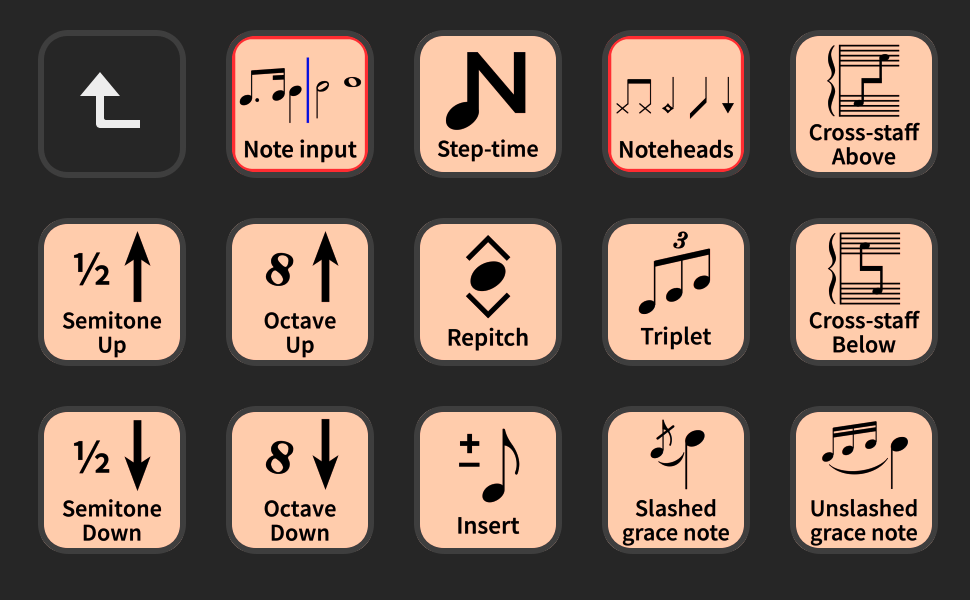 There’s a Visibility and Formatting screen that is specifically designed for Musescore’s methods of score formatting, including the use of spacers and frames, all available at the touch of a button. 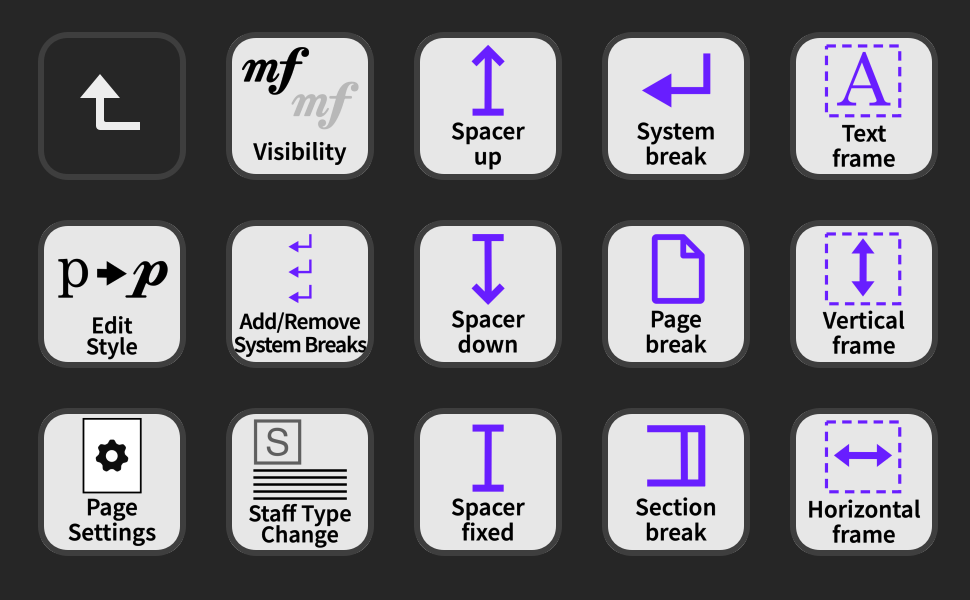 There’s so much more in Notation Express for Musescore — more than 250 commands packed into the profile — ornaments, jazz articulations, view options, playback controls, and arranging tools.

Notation Express for Musescore is available for both Mac and Windows and costs $29. It requires the latest version of Musescore (3.4.2 or higher) and is not recommended nor supported on earlier Musescore versions. See the end of this post for more information.

We were working on the Notation Express updates over Valentine’s Day, and we were feeling the love for Sibelius and Dorico users, too!

Users of the 15-key Notation Express for Sibelius configuration will notice a new subfolder in the View & Options folder (previously just View) which brings more than a dozen new features that were previously only available in the XL version, including handy zoom buttons, options to hide or show the Transport, Ribbon and Keypad, easy access to Engraving and Note Spacing Rules, and more. 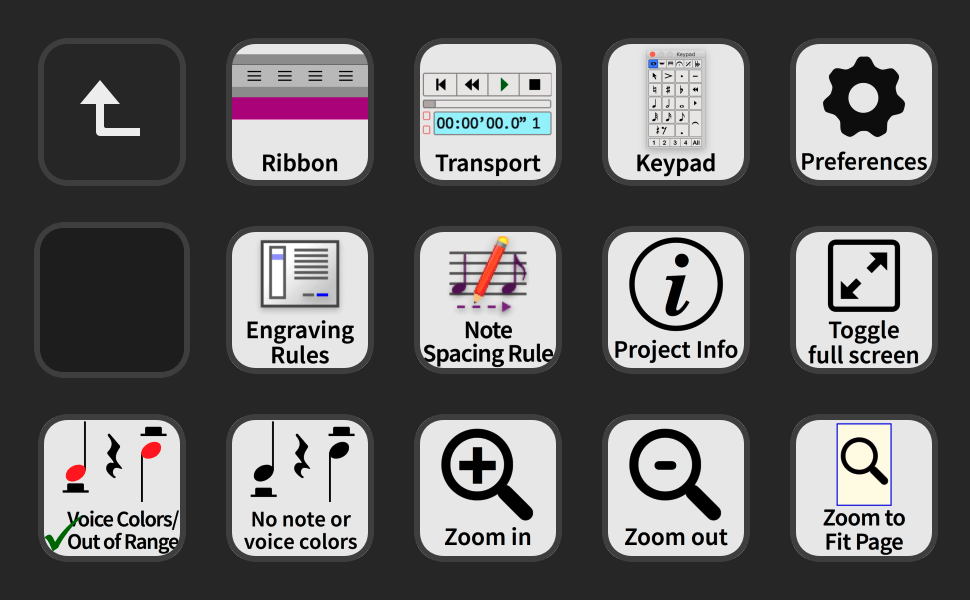 There are a bunch more new features for XL users.

The following Sibelius functions make their way to Notation Express XL for the first time: 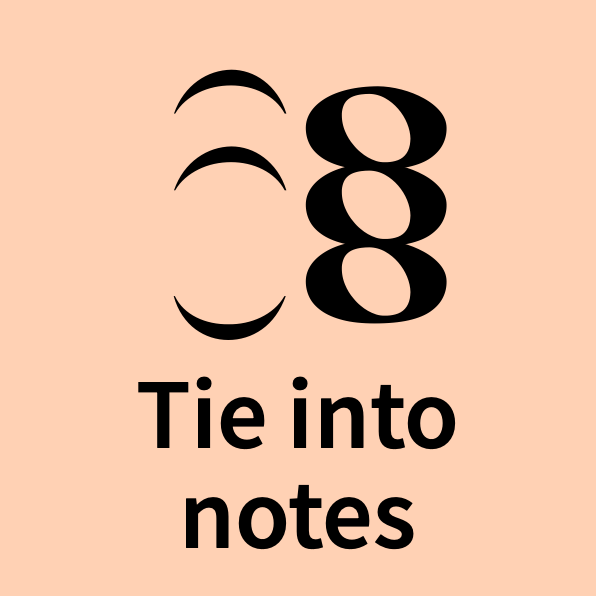 Because we could, we’ve built out a Keypad & Keyboard grid to replicate the numeric keypad and other keys not easily found on laptop keyboard layouts.

We’ve done some housekeeping in the XL Notes folder. The arrow keys that were previously there are now found in the new Keypad & Keyboard layout, and the staccatissimo and marcato articulations have been removed (they’re still present, as ever, in the Articulations folder). In their place you’ll find more commonly-used tuplet functions as well as the addition of diatonic and octave up/down buttons to complement the chromatic ones that were already there (renamed “semitone”). 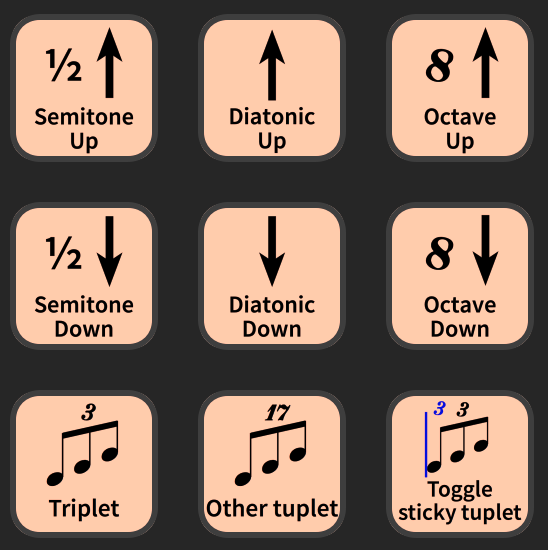 In both the 15-key and XL configurations, all Filters now have a blue border to make it easier to distinguish them from other buttons. Here’s the 15-key layout as it looks on iPhone:

There’s even more, but let’s not ignore our friends on the Dorico side…

Why don’t we pick up right where we left off. In Notation Express for Dorico, in both the 15-key and XL layouts, Filters are now colored with an orange border (because that’s what color they are in Dorico). Here are a few of them:

I’ll admit we were rather compulsive about adding filters in Notation Express for Dorico. There were 62 of them before today’s update; now there are 66, with Guitar Bends, Harp Pedals, Horizontal Lines, and Vertical Lines new to the mix in support of the Dorico 3.1 update, and you’ll find them all in both the 15-key and XL Dorico layouts.

In addition to the new Keypad & Keyboard folder, there are changes to the Notes folder to accommodate more up/down and tuplet options (see the Sibelius XL updates, above): 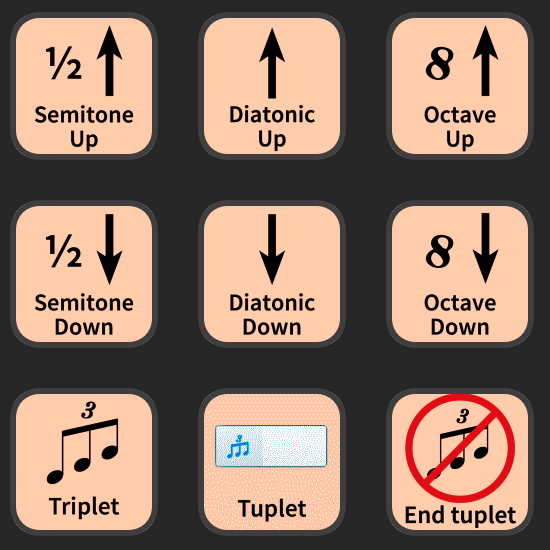 A quartet of other new buttons appear: Move to Downstem Voice 1, by popular request (in Modify and Arrange), and Toggle round brackets Toggle square brackets, and Short (top) barline, courtesy of the Dorico 3.1 update (in Noteheads & Harmonics and Bar, Barlines… respectively). 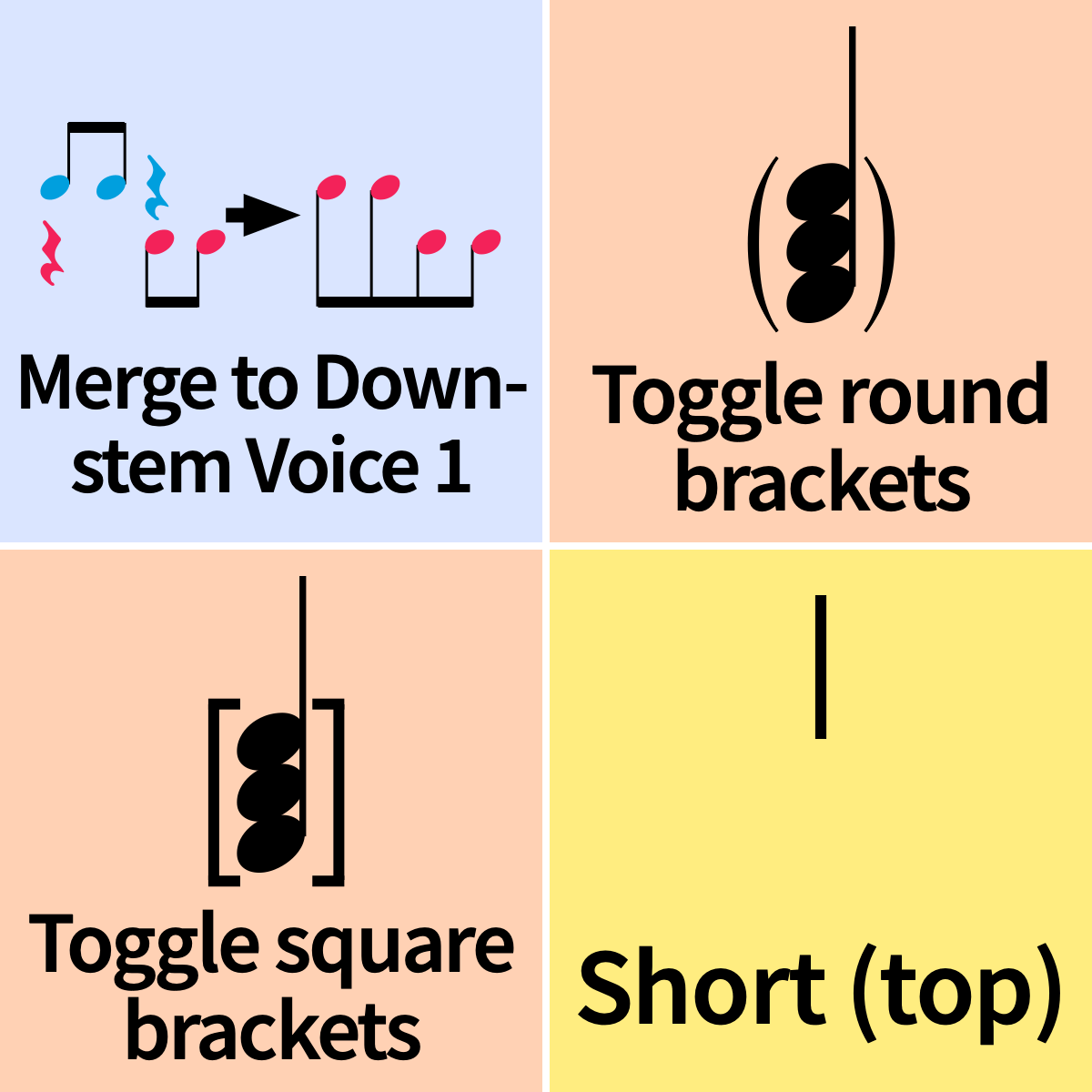 Under the hood, the Mac installers for both Sibelius and Dorico have been improved to more reliably install support files in the user home folder on Mac, and there are a few other goodies, all documented in the version history at the bottom of the Notation Express page at NYC Music Services.

As before, expert Dorico user Leo Nicholson is the wizard behind the curtain of all the latest Notation Express for Dorico features. Thank you, Leo!

Everything covered here is available now from the Notation Express page at NYC Music Services.

Notation Express is built for the latest versions of Sibelius Ultimate (2020.1), Dorico Pro 3 (3.1), and Musescore (3.4.2) at the time of this release. It is not recommended to use it with earlier versions or the “lite” versions such as Sibelius First or the intermediate version of Sibelius, or with Dorico SE or Dorico Elements. It has only been tested on English language setups. It may work with other localization settings, but you may have to modify the key commands, the Stream Deck shortcuts, or both.

Demos of the 15-key versions for Sibelius, Dorico, or Musescore are also available. These are not time-limited, but, as they are meant to demonstrate the concept of Notation Express and not intended for serious work, they only include a paltry selection of all the features that you’ll get upon purchase.

It is totally possible to use multiple Stream Decks or iPhones running Stream Deck Mobile at once, for the same or different notation software programs. You could have one each for Dorico, Musescore, and Sibelius at the same time, or all three with just one program showing different screens!

A simple yet powerful custom-designed Stream Deck profile for Zoom that can mute, unmute, start and stop video, screen share,...