“My Billy the Kid is a big boy now — almost twelve years old,” Aaron Copland wrote in 1949, when RCA was about to issue a recording of the suite that Copland created from his 1938 ballet Billy the Kid. “Listening to the top-notch recording Leonard Bernstein and the Victor Orchestra made of Billy put me in the position of the fond parent trying to judge the vitality of his offspring,” Copland wrote for the RCA Victor Picture Record Review.

Some 70 years later, Billy may be an old man, but Copland’s offspring are as vital as ever. Copland said that “I suppose that Billy started a trend since it was the first of the ballet Westerns,” the others, of course, being Rodeo and Appalachian Spring. In addition to starting a trend of writing ballets, with Billy the Kid Copland also began his practice of fashioning a concert suite out of the ballet score, something he continued with the later ballets.

It’s those suites through which most listeners are familiar with Copland’s ballet music. While it was perfectly reasonable to produce concert suites that would fare better on orchestral programs, especially with Billy the Kid and Appalachian Spring, the resulting compositions bypassed key elements of the stories. Far from only having “primarily choreographic” interest, as Copland himself once put it, much of the omitted music would be wholly unfamiliar to a listener who has only heard the suites. Hearing it could well reshape one’s perspective of Copland’s music.

Fortunately, an initiative has been underway for the last decade to create new editions of these works, as well as other Copland compositions such as the Third Symphony. Working with The Aaron Copland Fund for Music and Boosey & Hawkes, I’ve served as program advisor and editorial consultant on these projects, engraving the music anew and seeing that this music gets its rightful due in front of audiences and listeners.

That initiative continues this week during my visit to Baltimore, working with the Peabody Symphony Orchestra in advance of their concert this Saturday, February 16, 2019, when the orchestra will give the first performance of this new edition of the complete ballet from Billy the Kid.

As I’ve done with other Copland works, I’ve spent time at rehearsals, “road testing” the materials to ensure first and foremost that no showstoppers made it in, but also catching minor errors and soliciting feedback from the conductor, librarians, and performers, to help make the score and parts the very best they can be before they are officially published.

Doing this requires the cooperation and enthusiasm of the participating orchestra. I’m so grateful to conductor Joseph Young and librarian Robin Felt, without whom this collaboration wouldn’t have happened.

In this case, Peabody had already programmed the suite — not the ballet — from Billy the Kid. After seeing it on their performance calendar and realizing the relative ease of a round-trip train ticket from New York to Baltimore, I called up Robin and basically asked the orchestra if they could change their program for this project — a rather audacious request, I now realize, given the more than 10 extra minutes of music in the suite, new materials to prepare, and other programming adjustments that needed to be made!

Luckily, Robin was up for the challenge. She forwarded the request to Joseph and the rest of the Peabody team, who agreed to modify their programming and participate in this project. Thanks, Joseph and Robin!

It’s a good thing, too, as not only the score, but the parts to the ballet had previously only existed in manuscript form: 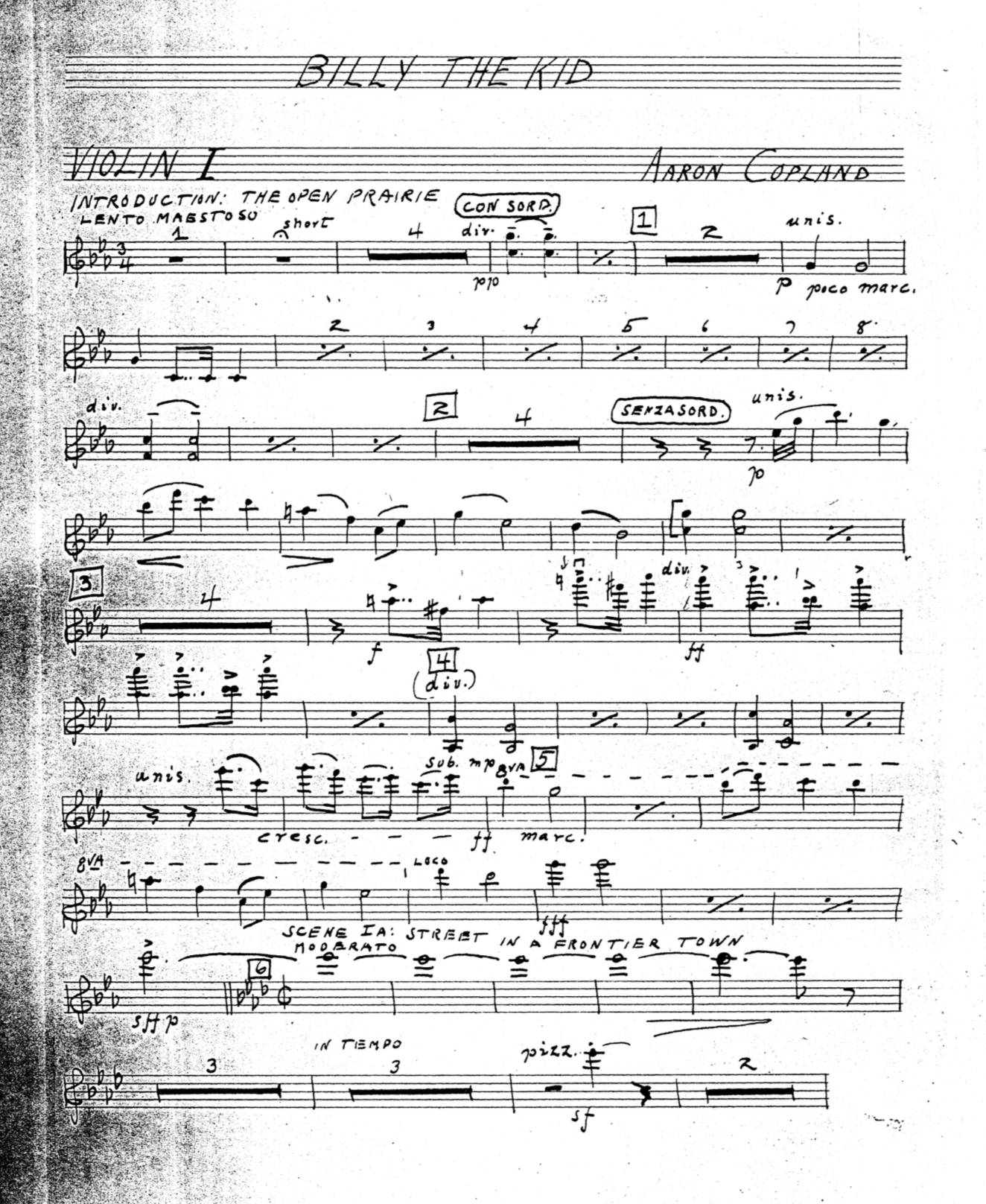 Hopefully we were able to improve upon them a bit: 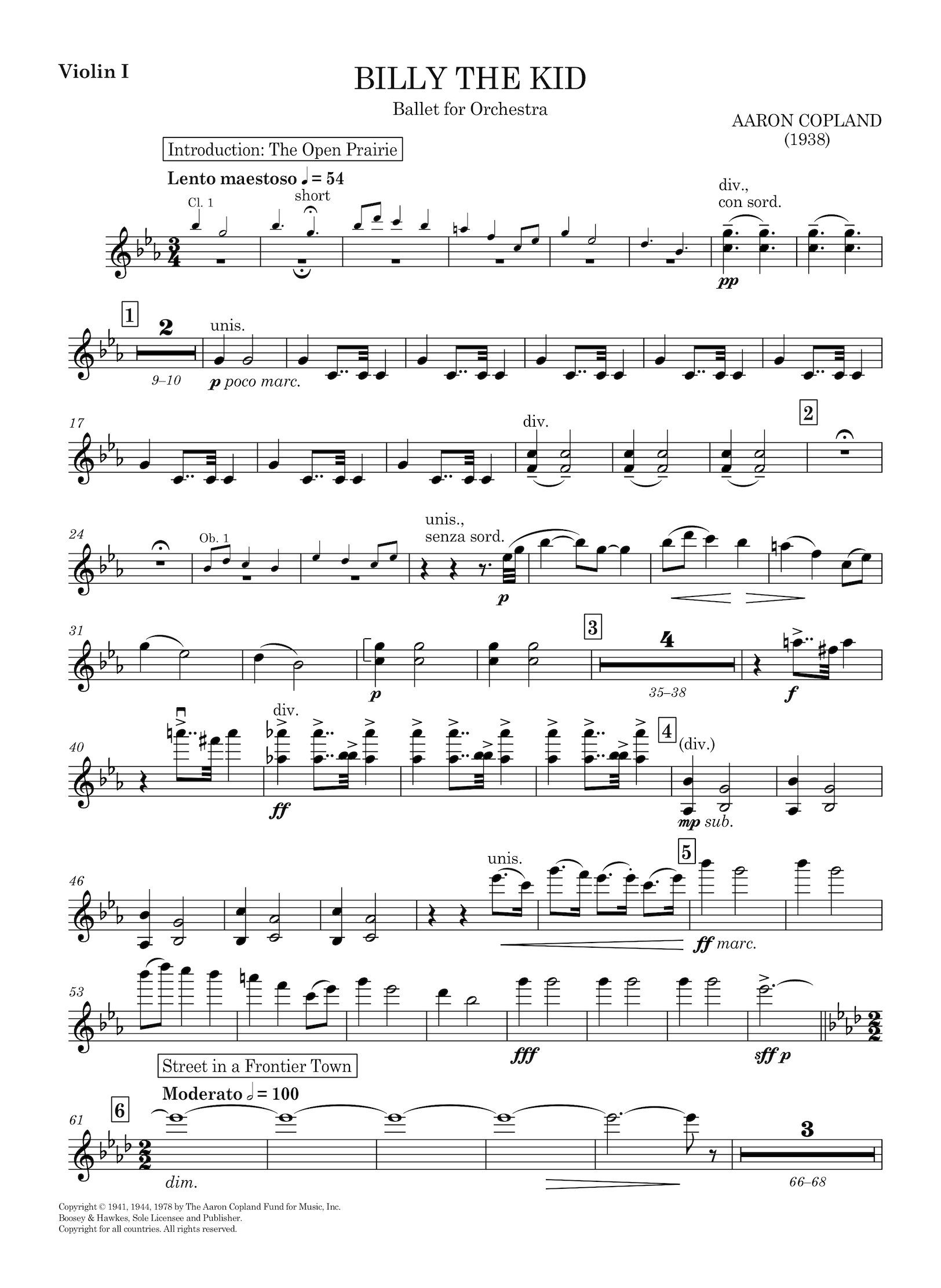 If you’d like to hear how it all turns out, the concert is Saturday, February 16, 2019, at 7:30 pm at the Peabody Institute in Baltimore; admission is free. If you’re not in Baltimore, you can hear the concert live-streamed online.