It is a well-established convention that bar numbers appear on every bar in film, session, theatre, and studio music, with good reason. No one likes wasting time counting “101, 102, 103, 104” to find their entrance when precious seconds are ticking.

Moreover, especially in theatre music, cuts or inserts can lead to non-sequential numbering (listen to our podcast guest Emily Grishman talk all about that), so having the numbers on every bar isn’t just a convenience, it’s a necessity.

Why don’t we often see bar numbers in concert music, you might ask? Generally, that music is less apt to be sight-read for the first time in rehearsal — players often have their music days or weeks in advance, and is instead rehearsed over a longer period of time, so wayfinding is less of the pressure cooker it can be in other contexts. Concert music is also more frequently published for sale and engraved for posterity — and what engraver wants to contend with bar numbers on every bar disrupting an otherwise beautiful display of pitches and rhythms?

It’s a problem encountered numerous times when you need to measure up to setting a high bar. (Last intentional pun-filled sentence, promise. Sorry.)

Seriously, though: Even if you’ve discovered the setting in Sibelius to display numbers on every bar in the parts, you’re left with positioning options ranging from bad to mediocre. Let’s fix this in Sibelius, once and for all.

Before we fix the problem, let’s review that aforementioned setting.

Set bar numbers on every bar

As a Scoring Notes reader, you may already be familiar with the settings in Appearance > Engraving Rules > Bar Numbers. The following settings will get you to the point where you have a bar number appearing below the staff, on every bar, and also number multirests, for good measure (ack, that was unintentional): 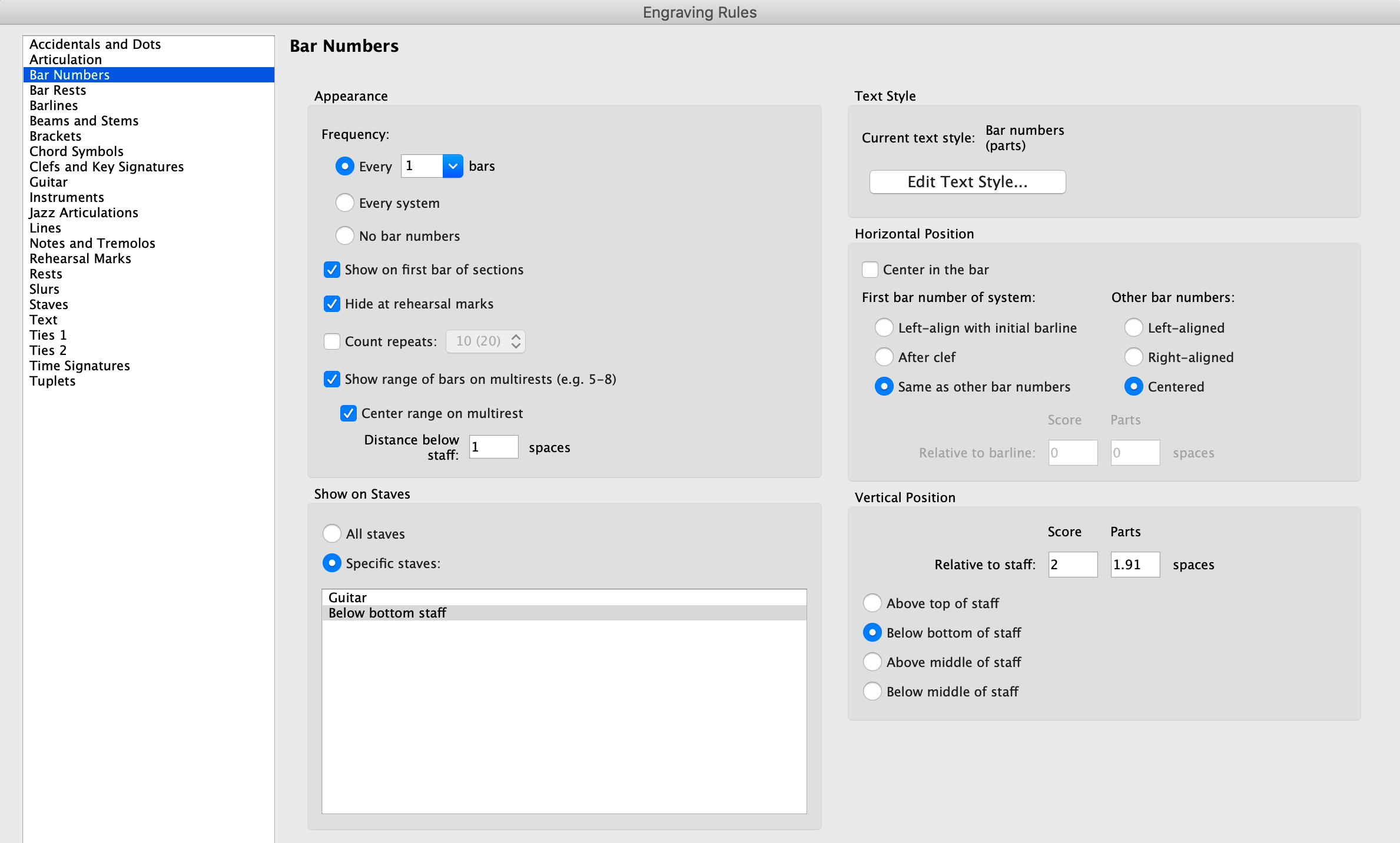 You might tweak these settings depending on your house style and font choices, but let’s establish this as the minimum needed to get Sibelius to display bar numbers on every bar.

Unfortunately, you wind up with undesirable results like this: 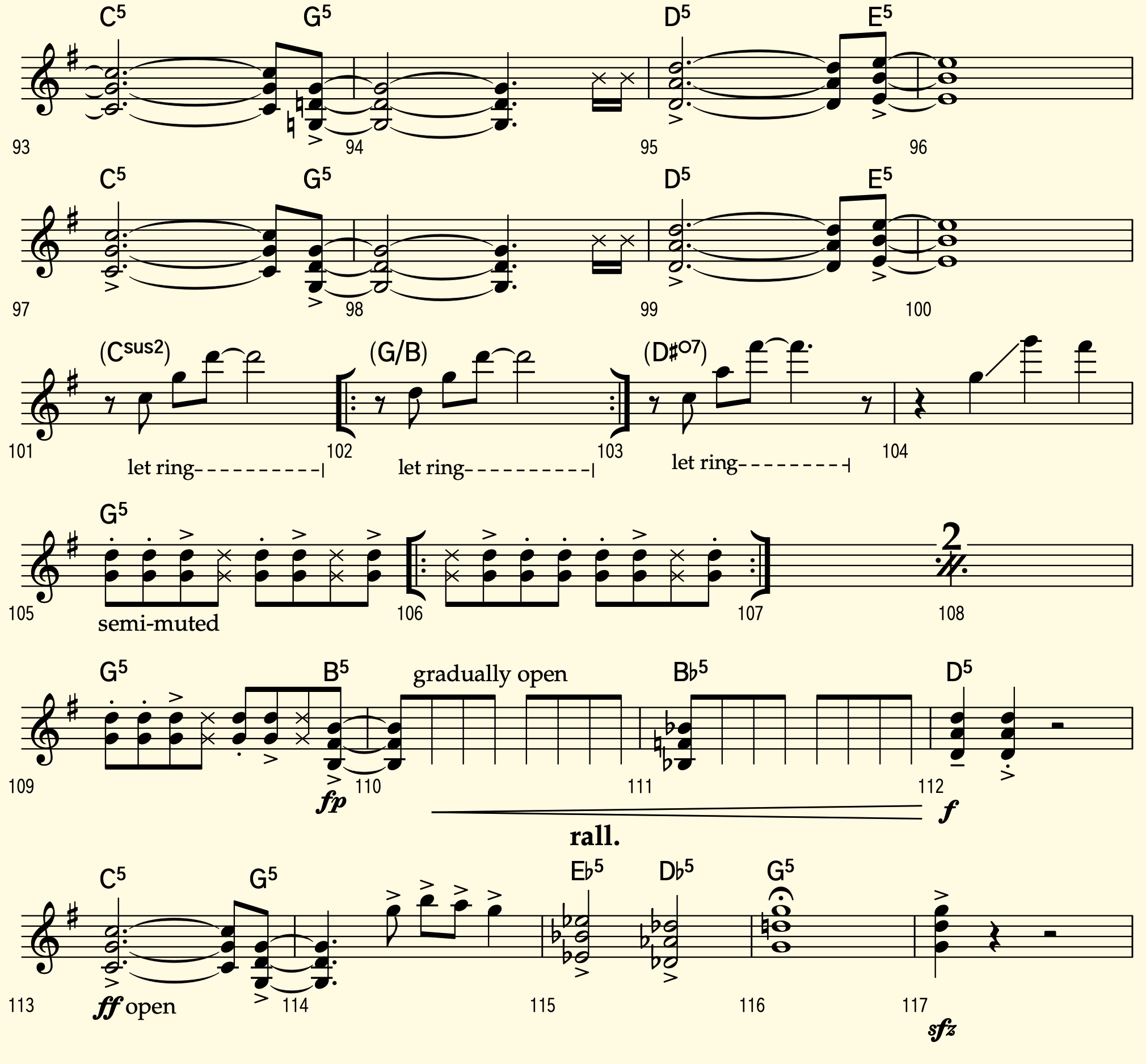 Magnetic Layout — a curse and blessing

What’s so bad, you might ask? After all, there aren’t any collisions, because Sibelius is using Magnetic Layout to repel items from one other.

But look at how far away the numbers appear on the first two systems. Sibelius is moving 93 and 98 away from the ties, but is also moving the other bar numbers on the system away as well, resulting it them being too far away from the staff.

Bar 117 compounds the issue. The number is moved because Sibelius is aligning it with the position of 114 earlier in the system, and then that results in the sfz being unacceptably far away from the notes.

As far as I can tell, all Sibelius default styles come with these settings in the Bar number section:

I won’t make a long post longer by describing every single setting. But until recently I settled for unchecking Grouped bar numbers to try to remedy the problem.

Taking that step led to this result: 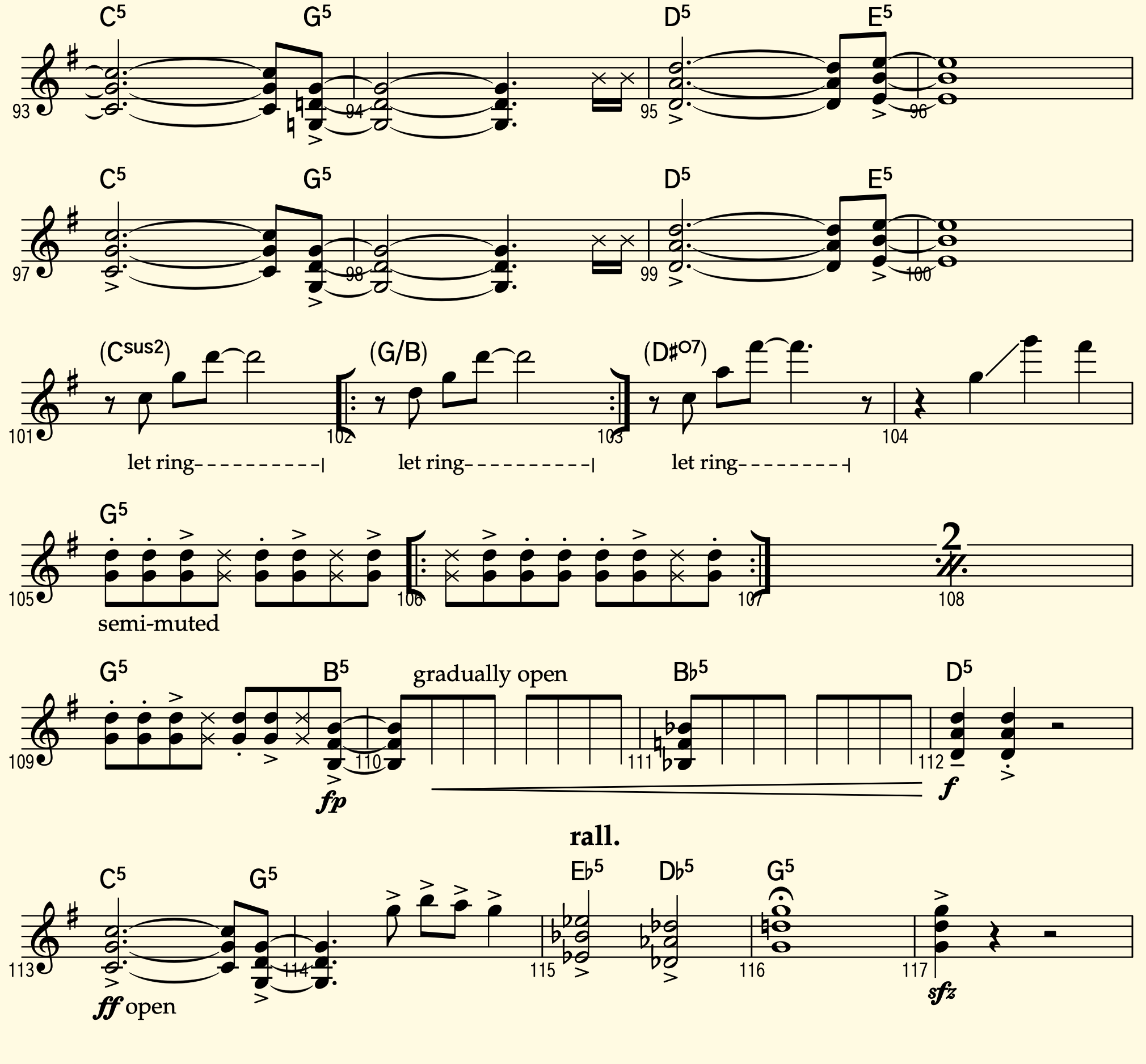 And yes, that arguably looks worse, although at least I started with all the bar numbers in horizontal alignment. The best I could do — or so I thought — was to manually scoot any colliding bar numbers to safety. That takes time, and I was always missing one or two in each part.

Ah — but there was something I had overlooked. In the Grouped Objects area, what if I told Sibelius not to group bar numbers at all but just let each one do its thing? From there, the rest of the pieces of the puzzle began to fall into place.

After a lot of experimenting with settings, I settled on these values:

How does it look? 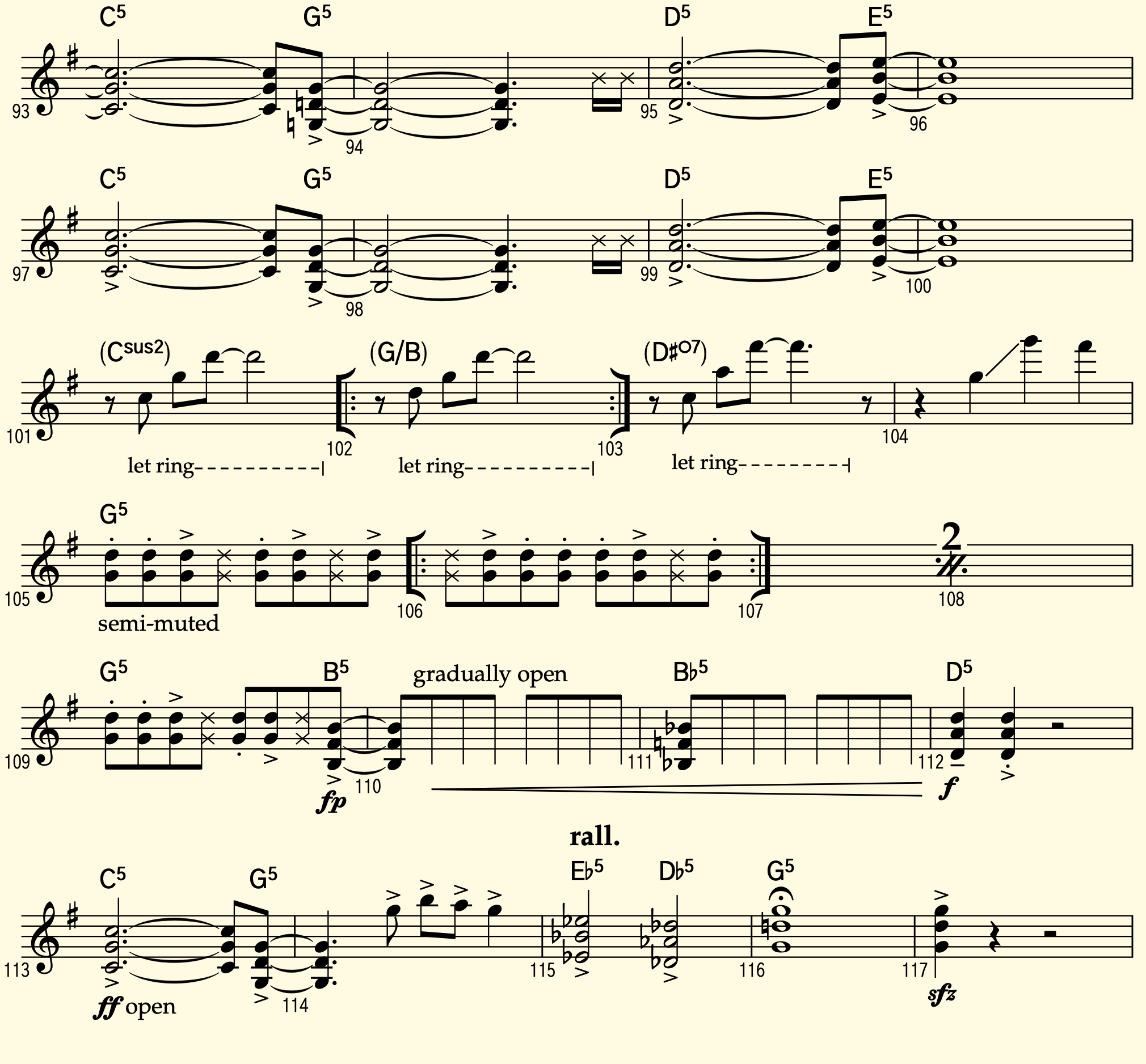 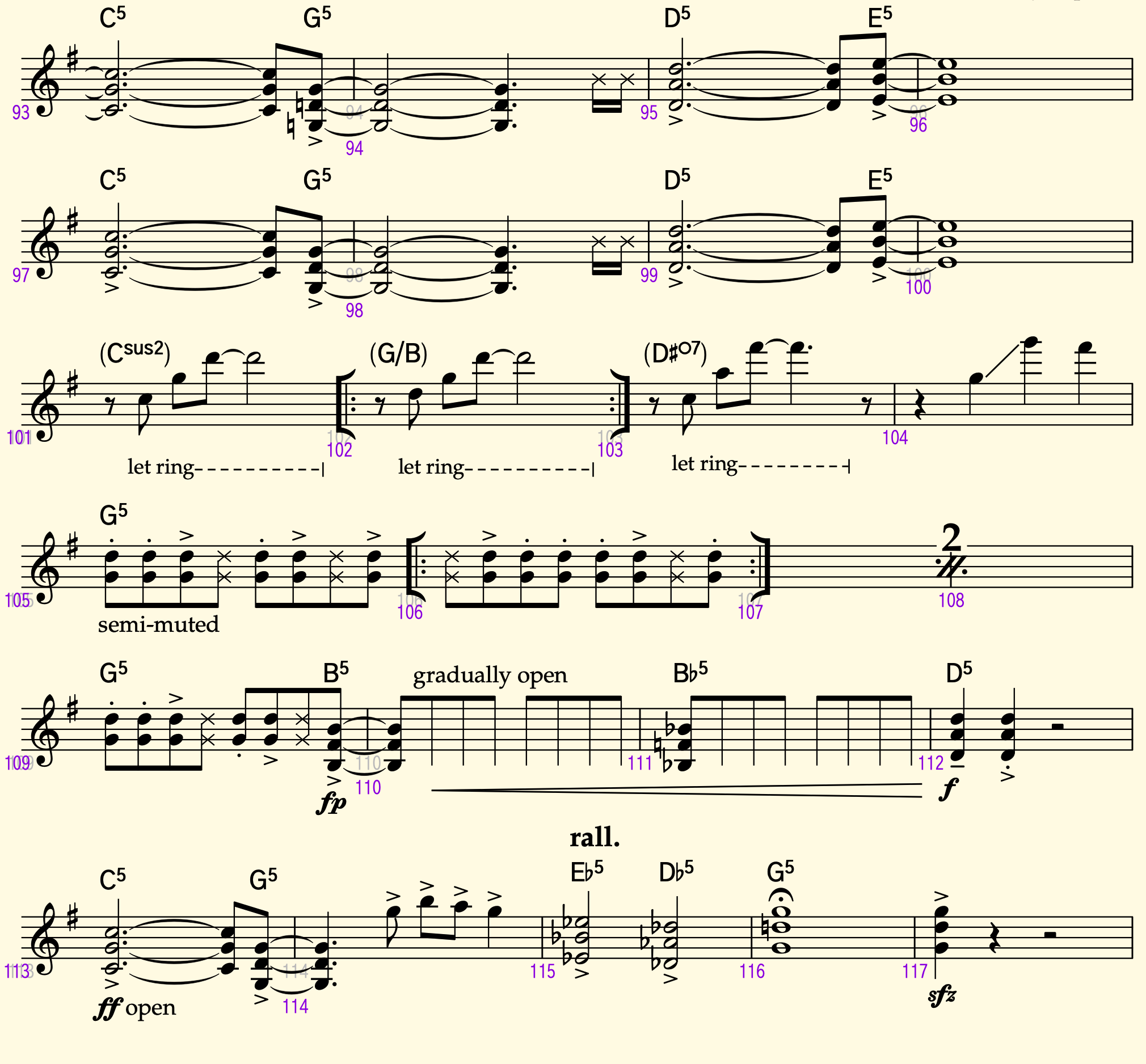 You can see the ways, both obvious and subtle, where we are putting Magnetic Layout to work for us. We just needed to tell it what to do.

Now, there may still be instances where some adjustments are required. But I’ve been working with these settings for several weeks, and I’m not going back.

You may have to adjust your settings somewhat to account for your font and style choices, but this is the basic concept. Special thanks to my trusted colleague Joseph Trefler for helping test these out and to all the users who have suggested this!

Get this and much more in Scoring Express

The Scoring Express suite of templates, plug-ins, fonts, and more debuted recently in Chamber, Jazz, and Theatre & Studio flavors. These premium collections are based on the same templates I use in my professional work at NYC Music Services, and if I’m updating my own templates with these new bar number settings, then they must go into Scoring Express, too!

And that’s exactly what we’ve done, along with a few other new features, now released as version 1.2 of Scoring Express, where all of these custom settings are automatically set in the templates, manuscript papers, and house styles, so you can just get going with them in a new score, or import them into an existing file to instantly beautify your music and make it look as good as it sounds.

Pick up the Scoring Express templates for all of this and lots more.

While you’re at it, please sign up for our next live webinar: Monday, March 1, 2021, at 2:00 pm, where we’ll talk about all of the recent Scoring Express updates and leave some more time for Q&A. Registration is free, whether you’re a Scoring Express user or simply curious about all the fuss. Hope to see you then!

Although it's more common to number bars in a score as if they are all played once straight through without...