2017: A year in review - Scoring Notes
Skip to content

As another year-end approaches, it’s hard to believe all of the interesting news and exciting changes that we’ve seen in our field in 2017 alone. It’s so heartening to see so much talent, knowledge, and robust discussion occur in all corners of the world of music notation software and related technology. 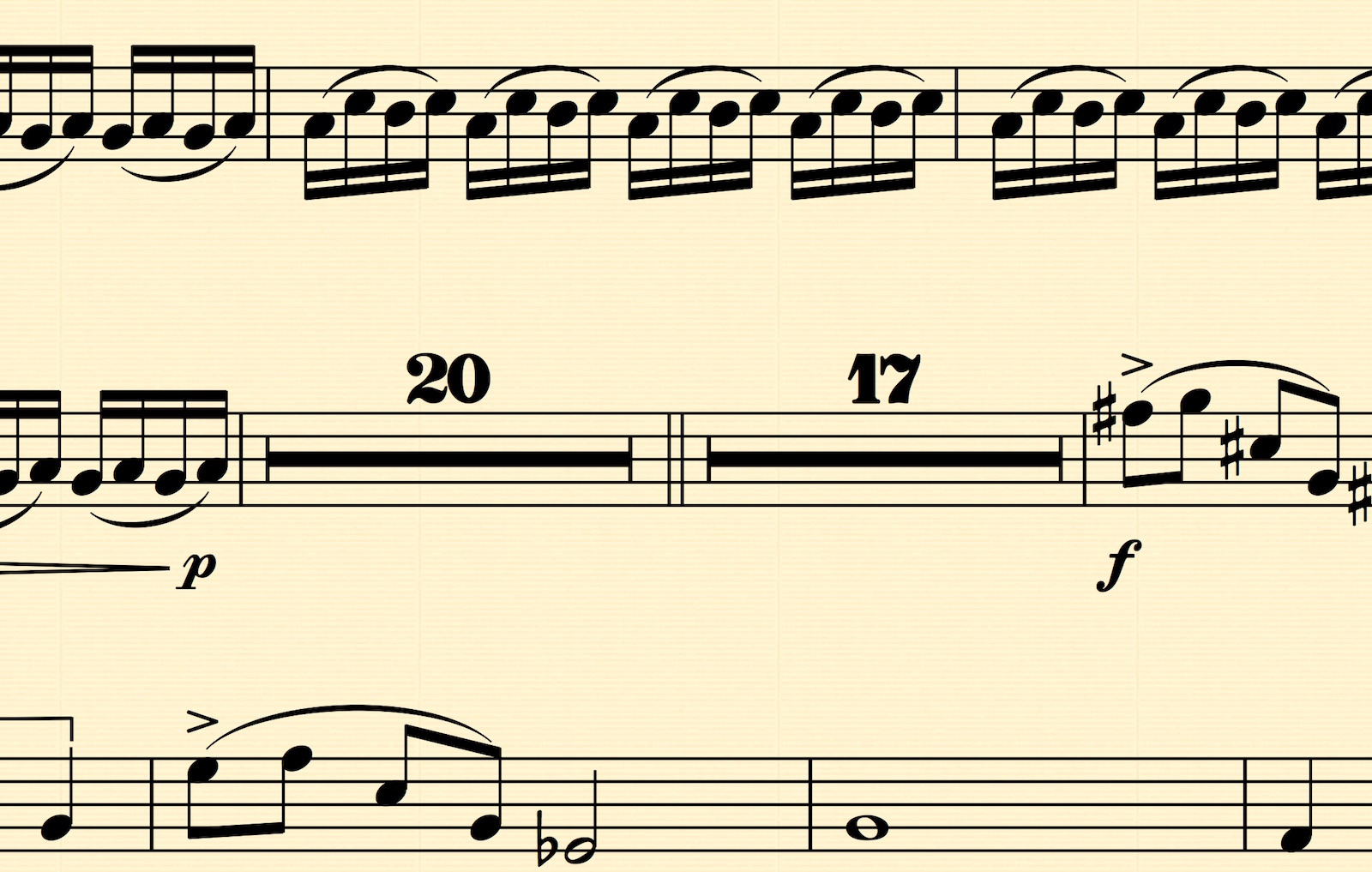 Without a doubt, the big change around here was the re-launch of this blog as Scoring Notes, after more than eight years being known as Sibelius Blog. All the content remained, but the blog got a new look.

It’s hard to believe it’s been more than five years since I started blogging here. I can’t do it alone, though — this year, we’ve had more posts than ever from our fantastic guest contributors on all sorts of topics.

Of course, you, the reader, are the lifeblood here. Whether you religiously read every post or just stumble upon here from time to time through a search or a link on social media, it’s gratefully appreciated.

If you’re doing some shopping on Amazon, whether it’s scoring last-minute holiday bargains, making year-end business purchases, or anytime, you can click the image below to support the blog. For any purchase you make after clicking on the image, Scoring Notes will receive a commission fee. It’s as easy as that!

If you’d like to browse the blog posts by category or by date, head on over to the archives.

Thanks for reading and very best wishes for a happy new year!

All the major desktop scoring programs were updated several times this year.

Sibelius 8.7 brought a new Cloud Sharing service to the desktop, and Sibelius 8.6 released with magnetic glissandi lines — lines that snap to both their start and end note, updating their positions if the notes change. Sibelius 8.7.2 notably improved a long-standing issue involving instrument changes, key signatures and multirests.

Notion 6.2 brought tighter integration between the scoring program Notion and its DAW counterpart in the PreSonus family, Studio One. A handful of notation improvements are included along with other fixes.

On the release of NotePerformer 2.0, a major update to the Sibelius-compatible sound library, we interviewed Arne Wallander, creator of the Wallander family of virtual instruments and NotePerformer.

In partnership with the Music Engraving Tips community group, we provided full transcripts of part 1 and part 2 of the interview with Elaine Gould, senior new music editor at Faber Music and author of the music notation treatise Behind Bars.

Robert Piéchaud talks music software and more on the Medieval 2 release. Medieval 2 is a new a comprehensive package that works within Finale to create early music notation. We caught up with Robert Piéchaud, Medieval 2’s creator, to learn more about it and Robert’s other projects.

The sheet music reader Newzik has an ever-growing list of annotative features designed to make the app more useful in real-world use. I asked Newzik’s product manager, Matan Daskal, about the opportunities, limitations, and the future of Newzik and MusicXML.

Symphony Pro 5 takes several steps toward our mobile notation future. David MacDonald has our in-depth review of Symphony Pro 5 — the latest offering of the iOS scoring app. The latest version’s marquee feature is handwriting recognition with Apple Pencil support. See how Symphony Pro stacks up in a burgeoning marketplace of tablet-based scoring apps.

Musitek’s new SmartScore Music-to-XML music notation recognition utility — the same feature originally planned for inclusion in Finale 25 — can analyze scanned PDF files of music and send them directly to Finale, Sibelius, or Dorico, or save them as MusicXML.

A first look at MusicJot, a new music notation app for iPad that uses the MyScript music recognition engine.

Komp is a beautiful and ambitious new scoring app for iPad, available after several years of development and a preview at NAMM.

Refresh your skills in the new year!

Don’t extract parts. Ever since Sibelius 4 introduced Dynamic Parts feature in 2005, and Finale 2007 followed in due course with Linked Parts a year later, I’ve hardly ever needed to extract parts from a Finale or Sibelius file — and you shouldn’t have to, either.

Adding headers for multi-movement works in Sibelius. Sibelius isn’t particularly well suited to having different headers in the same document for use in files with multiple sections. But with a little ingenuity, you can learn how to achieve this by setting up your text style in a particular way.

Use Dorico’s tuplets-over-barline feature for proper mensural notation. In Dorico, tuplets can cross barlines easily. Learn how to apply this feature, with an easy tweak, to properly render certain Renaissance notations that have been difficult to achieve with other software.

A few brief thoughts about the size of music paper. I often receive inquiries wondering if 9” x 12” paper was acceptable for orchestral use, or if 10” x 13” is necessary. Here are my thoughts based on experience preparing music for hundreds of orchestral projects.

Left-align chord symbols in Sibelius. Sibelius center-aligns chord symbols by default. If you prefer that they be left-aligned instead, you’ll need to change a few settings. Here’s how to do it.

Applying slash notation in Dorico via a Lua script. Scripting in Dorico is currently still in a nascent state. Even so, with this little bit of code, you can automate the creation of slash and rhythmic notation and learn more about how the program works in the process.

Changing font name and size for harp diagrams and tuning text in Sibelius. In Sibelius, harp notation text objects are created in a variety of text styles and often contain a mixture of fonts. Learn how they are fabricated, how to filter them, and how to change their appearance.

How to fix a common page numbering problem in Sibelius. If your Sibelius score suffers from an ailment where the page numbers unintentionally deviate from the conventions of left and right numbering, we have both the diagnosis and the cure.

Combine 8th and 16th rests into a dotted 8th rest in Finale. If you have a passage in Finale with eighths and sixteenth rests (and vice versa) which you want to automatically combine into a dotted eighth rests, the solution is far from obvious — but it’s possible, if you know where to look.

Fake it ’til you make it: New Sibelius plug-in for per-staff barline. A new plug-in automates the tedious process of creating special barlines and manually adding in fake “barlines” in certain instances where you don’t want the barline to appear to be joined between staves.

Check ties in Finale. Have you ever encountered a situation in Finale where you knew that you had a phantom tie going into a note where none was supposed to exist? Learn how to fix this by watching this 2-minute video tutorial.

Better breath marks in Finale. Ever find positioning commas (breath marks) tricky in Finale? Here’s a way to set it up so that they’re perfectly placed in the score and parts, every time.

Graphic notation workflow with Sibelius and Adobe Illustrator. In this video tutorial, David MacDonald demonstrates his current workflow for creating graphic elements using the basic drawing tools in Adobe Illustrator and placing them in his scores in Sibelius.

Masking meters and creating polymeters with metric modulations in Dorico. In Dorico 1.2, you can notate a piece with any time signature displaying as any other time signature. In this tutorial by Florian Kretlow, we’ll illustrate a useful trick that shows how to do just that, by using a piece from the core repertoire as our real-world example.

Creating freely metered music in Dorico. In this post, conductor and composer Claude Lapalme shows you how he composed a meter-less segment of a movement of a chamber orchestra work in Dorico, using its sophisticated note entry and engraving tools.

Sheet music: The map to your score. Composer and orchestrator Jeremy Borum shares his tips and tricks about sheet music preparation that may help streamline your process to achieve the fastest and most accurate way to get from raw MIDI to a printed score, regardless of what DAW or notation software you use.

Exclusive e-book excerpt: From DAW to Score. Composer, orchestrator, and copyist Tristan Noon’s new e-book, From DAW to Score, is now available. We have an exclusive excerpt from the book on our blog — and a special discount code as well.

How to tape and fold pages for parts: a video tutorial. The question often gets asked: How does one print and tape music accordion-style? In this blog post and accompanying video, learn the technique and tools you need to accomplish that very task.

It's hard to believe, but today marks one year of this blog as Scoring Notes. Last year, after more than...

The February 2012 issue of International Musician, the magazine of the American Federation of Musicians, features guitarist-composer Pat Metheny on its...